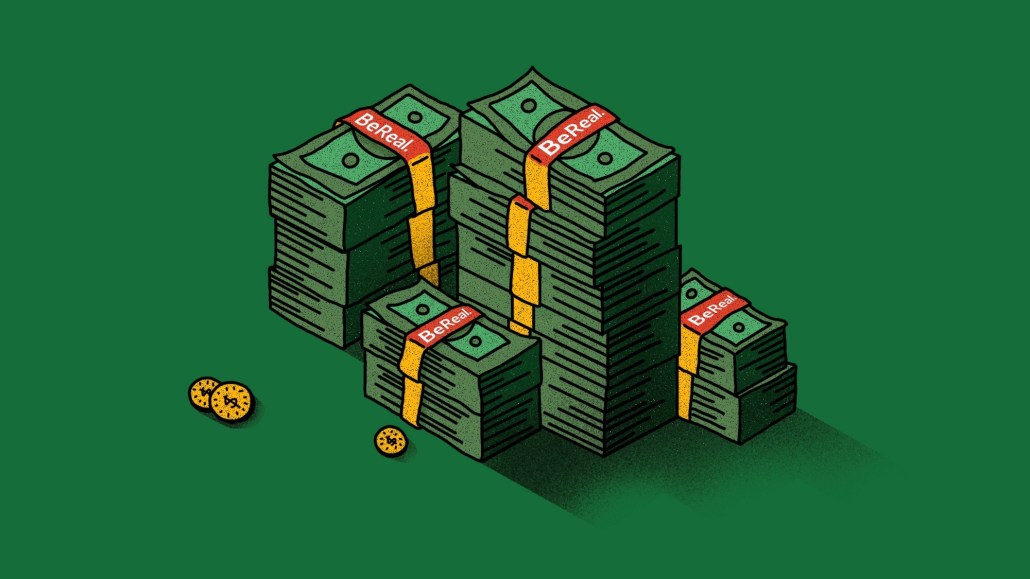 Just “be present” is the key message behind the photo-sharing app’s prompts for its users to share what they’re doing in that moment. You’ll see a room full of hands — holding their phones — raise. But marketers are steering clear of the app — at least for now — six advertisers told Digiday, until the platform opens up an opportunity to advertise.

Unless BeReal moves quickly to offer those marketers unique features they’re interested in, the potential forthcoming global recession could put experimental ad dollars on freeze, and prevent the app from getting consistent checks from marketers any time soon.

The app has attracted all kinds of attention from creators and more generally Gen Z, who are enticed by the app’s authenticity and real-life ambitions, compared to the majority of platforms which are littered with polished posts.

That authenticity has won over users, said Melanie Kentish, managing partner at Gleam Futures, who pointed to YouTube, as having a similar origin story when people initially uploaded content and didn’t think much about who was going to watch it. “[Creators] didn’t need a content strategy. It was just them, playing around when the internet was fun,” Kentish said.

With its unique premise, BeReal was likely to pique the interest of marketers as an up and coming channel. Even moreso because of its limited risk. Branded content there is organic, not paid so the costs are relatively low.

Marketers are dipping their toes in the water.

“One of our clients, [e.l.f. Cosmetics], is the first beauty brand on BeReal, because we’re following it, we’re looking at it and we’re educating, just like we did with TikTok,” said Evan Horowitz, co-founder & CEO of creative studio Movers+Shakers.

However, this early interest from advertisers won’t monetize the business long-term.

Paris-based BeReal is currently backed by a group of external investors. The app closed its series B funding round on $60 million earlier this year, according to TechCrunch, having previously secured $30 million in a series A round, co-led by Andreessen Horowitz and Accel in June 2021. At the time, the business is said to have had a valuation north of €600 million — or about $592 million.

So — if this app is free to download and use — and doesn’t have ads, what happens when BeReal has plowed through its investment? BeReal did not respond to a request for comment at the time of publishing.

If advertising is on the cards, which recent reports suggest, then BeReal has a short window of opportunity to get an ads business up and running. Dither for too long and one of BeReal’s larger competitors could try to copy it. In fact, TikTok did just that last month with the launch of its BeReal clone, TikTok Now, which the platform states is “a daily photo and video experience to share [users’] most authentic moments with the people who matter the most.”

Since then, TikTok has started pitching it to agencies. Simon Friend, agency lead at creator and content marketing agency round, already received an email from TikTok about the launch a couple of weeks ago.

For now, BeReal is more of a social network than a social platform — which is never welcoming to advertising.

“It’s not a great place for brands to do partnerships with influencers — yet,” said Jess Phillips, founder & CEO of The Social Standard. “Right now, I wouldn’t encourage brands, for the most part, to be on there.”

In other words, marketers aren’t sure how to use it yet for two reasons: app users love the authenticity of its content, which doesn’t lend itself to ads, and more importantly, there is no ads feature available.

“There isn’t space for brands there, because there are no advertisement possibilities and the clear positioning of the app,” explained Dean Cooman, head of talent at creative agency Boomerang FT. However, he did mention the agency is currently speaking to clients about the possibility of using it within their social portfolios in the future, and the team is monitoring its progress and audience in the meantime.

Even if ads do arrive on BeReal they wouldn’t necessarily be an immediate win. Aside from the time, money and commercial nous needed to get advertising right out the gate, there’s the small matter of a looming global recession to think about. Whenever there’s a recession marketers tend to revert to platforms with guaranteed ROI given their lean budgets. There’s little time for experimentation on anything new.

According to Sensor Tower Consumer Intelligence, while the app has reached more than 53 million worldwide downloads across the App Store and Google Play this year, only 9% of BeReal’s global Android users opened the app every single day in Q3 2022. Anyone remember Clubhouse? Suddenly this feels a bit like deja vu.

Maybe that’s a bit harsh. BeReal’s worldwide users increased from 710,000 daily active users in 2021, to 10 million by August 2022, according to Business of Apps, which cited data from mobile app analytics company Apptopia.

Regardless of growth, BeReal needs to figure out the best way forward to monetize itself longterm, to keep Gen Z happy, before all the fun (and funds) come to an end.

“[Advertisers] are thinking about BeReal,” said Jenny Tsai, CEO of Wearisma. “I’d imagine it’s in the backs of their minds. It’s still early days, but it’s a platform to watch.”