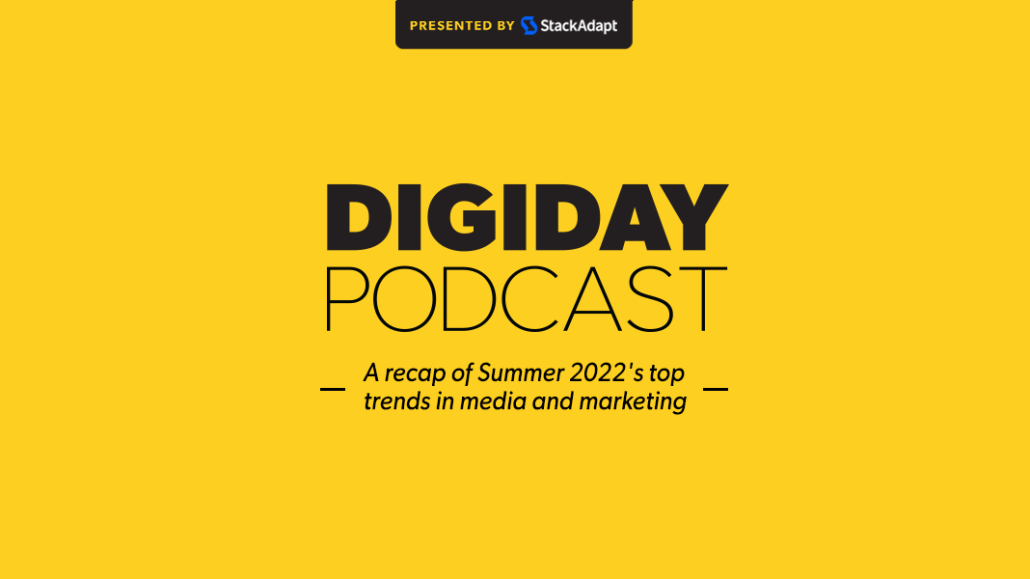 The summer can be a slow period for many companies, however the economic downturn, supply chain issues, rising inflation rates and world events like the Russian invasion of Ukraine didn’t take time off when the rest of us did. Now heading into the fall, a lot of media execs are trying to strategize for a business environment that doesn’t reflect how it used to look even six months ago.

At Digiday, we spent the summer following these subtle – and not so subtle – changes to the industries we cover and narrowed down key trends that either emerged or expanded during the past few months. On the latest episode of the Digiday Podcast, my co-host Tim Peterson and I unpacked the biggest takeaways from that time period as well as chatted through what this could mean for media companies’ fourth quarter and the start of 2023.

Some trends we covered this summer:

Tim: Roku, on its second quarter earnings call, talked about how it saw a slowdown in advertising and it attributed to the scatter market. The scatter market is this jargon term that’s basically just advertisers … not committing to these year-long deals to spend millions of dollars with a TV network [but] placing those buys on a quarterly basis. It’s more digital, where you place your buys almost immediately. And that’s where Roku saw the softness.

And so I think that fits with a lot of the digital media companies or more digital-heavy media companies seeing softness in advertising too, because if you’re an advertiser and you’re worried about how much money you’re spending, or you need to shift budget around, you look for where’s it going to be easiest to shift budget around. We saw that in spring 2020 [and] we’ve been seeing that over summer 2022.

Kayleigh: [Publishers are saying that] advertisers have slightly different goals. A big KPI that I’ve heard is looking for conversion metrics, but it’s not always [about] getting to the point of checkout. There’s also an eagerness to raise certain engagement metrics too, like shares or click-through. So I think that is changing for certain categories [as well] and what products they’re willing to spend on right now and which ones they’re not. And I don’t think that it’s the same [for all] categories.

Tim: These big commitments with the big media companies, the big TV network owners, the big advertisers, those have held steady, at least for now. I think we still have to see what the fourth quarter is going to look like.

E-commerce is slowing down

Kayleigh: One of the areas that will be very interesting to follow in Q4 is how commerce is performing, but beyond that, how advertising and commerce converge or drift apart. Going back to KPIs, there is a push around conversions in campaigns that advertisers have with digital media publishers, but there is that expectation that whatever campaigns they’re buying right now have some sort of measurable performance.

In the past couple of years, I’ve written about how commerce and advertising are [converging] and there’s a little bit of a hybrid model of having a display ad that’s really focused on driving a purchase to one item or even like with branded content, there’s a lot of affiliate tie-ins now. It’ll be interesting to see how those two areas really merge together if commerce itself isn’t performing at the level that it had been when it was [on its own]. But at the same time, a few publishers I’ve spoken with have said that commerce-based campaigns haven’t been performing the way that they thought.

Tim: At the start of the year, back in January, there was the big news about Best Buy fully going into the retail media space. And you have others, like Walmart and Amazon and Kroger, who are in that space, and I wonder if any of that is having some sort of impact on media companies’ commerce businesses – especially when they pair with their publishers’ advertising businesses. If you’re a publisher pitching [that] we can help you sell a product, that sounds nice and all, but up against Amazon, Target or Walmart who own that point of sale, it feels like that can be a very difficult pitch.

Kayleigh: I am curious where these retailers are going next. They’ve, in the past, paid publishers to create content for their websites in paid partnerships. Maybe one day, they might just buy up a couple of publications to see if that works better for them, as well. But you’re right. I do think that that is a big area of contention when looking at how publishers are approaching their commerce businesses.

Tim: People are hearing about rising inflation [rates] and so then you start paying more attention to your grocery bill, the price of what you’re buying. On the streaming side, subscription [prices] keep going up: Netflix raised its price again earlier this year, Hulu is right now going through another round of raising its subscription price. so there’s all this competition for people’s wallets that people are just going to end up getting smarter or more discerning with how they want to be spending their dollars.

Cost-cutting could have inadvertent effects

Tim: I’ve talked to some media executives who’ve had a hard time hiring people because they don’t have an office. In spring 2020 everyone started working from home, those companies got rid of their office spaces to save on costs and now they’ve had some candidates that they’ve offered positions to [not accept the job]. Those people [asked] do you have an office, because in some cases, they just want an office space to be able to work away from the mayhem of their personal lives, or people who maybe are in sales want a spot to be able to have meetings with clients.

Digiday stories referenced in the episode

‘It takes ingenuity to survive’: How The Daily Beast’s Mia Libby is bracing for an economic slowdown

How Buzzfeed Inc.’s Edgar Hernandez is preparing for a recession while seeing signs of recovery