Media Briefing: How publishers plan to step up their podcast strategies in 2022 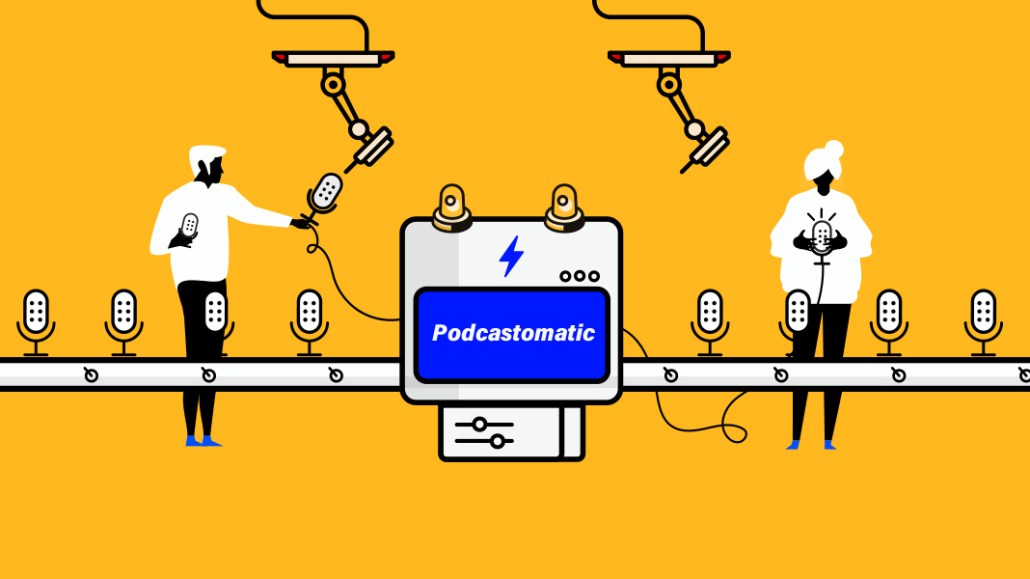 In this week’s Media Briefing, media reporter Sara Guaglione looks at how publishers are planning to scale up their podcast businesses in 2022.

As publishers continue to churn out new podcast shows, the space is consolidating. As podcast giants like Spotify build out their own in-house production arms with The Ringer and Gimlet Media, media companies are being pushed to find ways to similarly size up to stand out amid an increasingly saturated podcast marketplace.

The number of English-language podcast series on the market increased by 39% from January 2020 through October 2021, according to podcast analytics and ad platform Backtracks. The number of podcast episodes increased by 20% in that time period. Fortunately for publishers, podcast listeners’ appetites have similarly gone up. In a recent survey of 2,000 U.S. adults from Nielsen and podcast hosting and monetization company Acast, 52% of those surveyed who consume podcasts at least monthly increased the amount of time they spent listening over the past six months. (However, the study did not include data on overall podcast listening time).

To fight for eardrums heading into 2022, publishers are spreading out their podcast efforts. They are expanding their podcast teams and appointing new audio leaders as well as planning to push out more episodes and in more parts of the world.

Headcounts expected to grow next year

Shani Hilton, managing editor for new initiatives at the L.A. Times, expects the L.A. Times’ audio team to “probably double” next year, from its current total of 10 under Aguilera.

The Washington Post also has plans to expand the audio team, which is currently made up of about 20 people, Jablonski said. While she didn’t say how many people the Post was looking to hire, she said she wants the team to be able to handle having “more things happening at once” while working on enterprise and breaking news stories, Jablonski said. “We want to really build the team in a way so that we can have more things happening at once so that enterprise work continues and breaking news stories can be taken care of in a way that we feel proud of,” Jablonski said.

CNN also wants to grow its editorial and product audio teams to develop audio and podcast projects next year, a spokesperson said, without providing specifics. CNN will bring more talent and hosts to its podcast programming in 2022.

Slate is planning on increasing the frequency of some of its longest-running, popular weekly podcasts including, “Mom and Dad Are Fighting,” “What Next: TBD” and “Political Gabfest” — the exact frequency changes of these shows is still TBD, according to a spokesperson.

Three-quarters of 2,000 U.S. adults who consume podcasts at least monthly say they listen to podcasts weekly — but just 43% of podcasts currently publish on a weekly cadence, according to a recent study from Nielsen and podcast hosting and monetization company Acast. “There’s an appetite there,” said Nick Southwell-Keely, U.S. director of sales and brand partnerships at Acast.

The Vice audio team plans to work with more outside organizations and platforms to create podcasts next year, according to Kathleen Osborn, vp of audio at Vice. “I want to continue to lean into and collaborate with like-minded, but complementary places that can be really additive for audiences,” Osborn said. The benefits are cross-promotion and the ability to create more and better shows, she said. “We’re doing it more next year… we just haven’t announced them [yet],” Osborn added.

At Vox Media, “Today, Explained” will reach a larger audience through a new radio distribution partnership with WNYC Studios, according to Moe. “Pivot,” hosted by Kara Swisher and Scott Galloway, will produce video content for Salesforce+, a new streaming service for businesses and professionals.

Slate is working on a new narrative podcast series about Roe vs. Wade, set to launch in May and supported by a grant from the International Women’s Media Foundation.

Vice’s audio team has a focus on “globalized work,” Osborn said, thanks to its offices around the world. “With whatever show we’re doing, we think about it as the English-speaking or -understanding audience,” she said. Though 70% to 80% of Vice’s podcast listeners are living in the U.S., its international audience is increasing, Osborn said, though she did not provide audience data or details. Vice has previously produced podcasts in Spanish and Japanese and is working on a new show in Arabic. Vice is also looking to create podcasts in Hindi and Japanese, Osborn added.

As The Post continues to invest in international teams, “we are thinking a lot about how audio is fitting into that expansion, and how to get more of what the Post does so well to more people,” Jablonski said. She couldn’t share specifics yet but said the development process is starting with “thinking about daily habits and thinking of the time of day in terms of consumption and what people want and need to hear when,” she added.

The Post is working on two pilots for the beginning of next year and has others planned for later in the year, Jablonski said. Overall, the goal is to introduce more podcasts than this past year.

Next year, ViacomCBS will continue developing podcasts around its franchises, such as “The Daily Show” and “48 Hours.” Three new shows are currently being piloted around The Daily Show. Steve Raizes, svp of ViacomCBS Podcast, said to expect more original podcasts coming from ViacomCBS next year. He sees audio opportunities for TV pitches that don’t get developed into a show. “The podcast and TV pipeline… is an amazing chance to pilot and do a proof of concept on a different economic scale than linear,” he said. — Sara Guaglione

“This is [Vox Media CEO Jim] Bankoff and [Group Nine CEO Ben] Lerer realizing that, to move the needle for major marketers, you need both breadth and depth. It’s sort of a throwback to folks from the late ’90s… What’s different now is people are monetizing it, instead of just reporting phantom traffic.”

This year, the term “mergers and acquisitions” has been thrown around in the media industry with such gusto and intent that by the end of the year, it was important to ask, what publisher hasn’t at least toyed with the idea of buying or being bought by a competitor?

The past couple of weeks alone were chock-full of new deals, including Vox Media acquiring Group Nine and BuzzFeed closing its purchase of Complex Networks and becoming the first of several publishers to follow through on plans to go public via SPAC after hyping up the idea for the past six months.  — Kayleigh Barber

Here is a timeline of some of the major publisher M&A deals from the past year:

And of course, let’s not forget the mergers that might have been (and may still be):

$80 million: The amount of money invested into Food52 by TCG, the investment arm of The Chernin Group, which includes $48 million to cover Food52’s acquisition of the home decor company Schoolhouse.

6,150: The number of news workers laid off during the Covid-19 pandemic.

$59,000: Salary floor that The New York Times has set for Wirecutter employees as part of an agreement signed with Wirecutter Union.

Privacy regulators appear poised to play a more active role in the digital ad market in 2022. However, some publishing and tech executives are wary of whether that will play out to their benefit or detriment.

As 2021 comes to a close, the level of attention that privacy regulators are paying to digital ad tracking and profiling is “heightened,” said Dominique Shelton Leipzig, partner and co-chair of the ad tech privacy and data management practice at law firm Perkins Coie.

Within the past month, there have been two privacy regulation-related moves made in Europe that reflect that intensified interest.

While both laws appear to redouble the boundaries introduced by Europe’s General Data Protection Regulation law, they also reinforce the renewed attention that digital ad practices are receiving from regulators. Among publishing and ad tech executives, the attention spills over into concerns regarding how privacy regulators’ increased activity may affect the balance of power in the digital ad market.

“There is a lot of interest in what is happening in the privacy realm right now and how that affects digital advertising and then how privacy and antitrust meld together,” said one publishing executive.

Specifically, publishing and ad tech executives are concerned about the consequences of regulators like the U.K.’s Information Commissioner’s Office and Competition and Markets Authority reviewing Google’s Privacy Sandbox proposal for replacing the third-party cookie. The I.C.O. and C.M.A. are assuming regulatory oversight of Privacy Sandbox. However, some publishing and ad tech executives feel like they have had little insight into how that work is progressing.

“I don’t know if there’s a way to stay closer to the beat of what’s happening in that triangle of two regulators and Google and the rest of the industry, but that’s where I’ll be focusing my attention,” said one ad tech executive.

For its part, the I.C.O. did publish a Commissioner’s Opinion on Nov. 25 that discusses Google’s Privacy Sandbox. However, it does not provide a wealth of insight, as indicated in the below quote from the report.

“Google has not yet fully articulated how the GPS proposals comply with the requirements of data protection law and PECR — both individually or as a whole. This is partly due to individual proposals being at different stages of development, as well as issues raised during those processes. As such, the Commissioner does not intend to provide a detailed critique of specific GPS proposals beyond the content of this Opinion. This may change in future, where appropriate and if they reach a more advanced stage.” — Tim Peterson

Publishers’ post-cookie plans are set, but they’re still worried about what’s next:

Future plc wants to be carbon-neutral by 2026:

A Q&A with Reach’s Terry Hornsby on how the U.K. publisher plans to reach 10 million registered users:

It’s winter for publishers’ digital advertising businesses:
In a CNBC article about BuzzFeed’s valuation and its ripple effect on private publishers looking to go public, BDG CEO Bryan Goldberg said that the digital ad market in the fourth quarter of 2021 is not looking good for media companies because of advertisers’ supply-chain issues.

Moneyball can’t be applied to journalism:
A color-by-numbers approach to article production would make journalists’ lives easier, but it’s hard, if not impossible, to know which metrics from previously published stories signal their success, let alone what may be sure bets for future pieces, according to Columbia Journalism Review.

G/O Media wants to grow, but internal tensions are leaving the company vulnerable:
G/O Media CEO Jim Spanfeller is ready to take part in the media merger and acquisitions race, after claiming a profitable year. Insider reports, however, that employees are frustrated with poor contracts, union negotiations and a lack of resources, which they feel are inhibiting editorial growth.