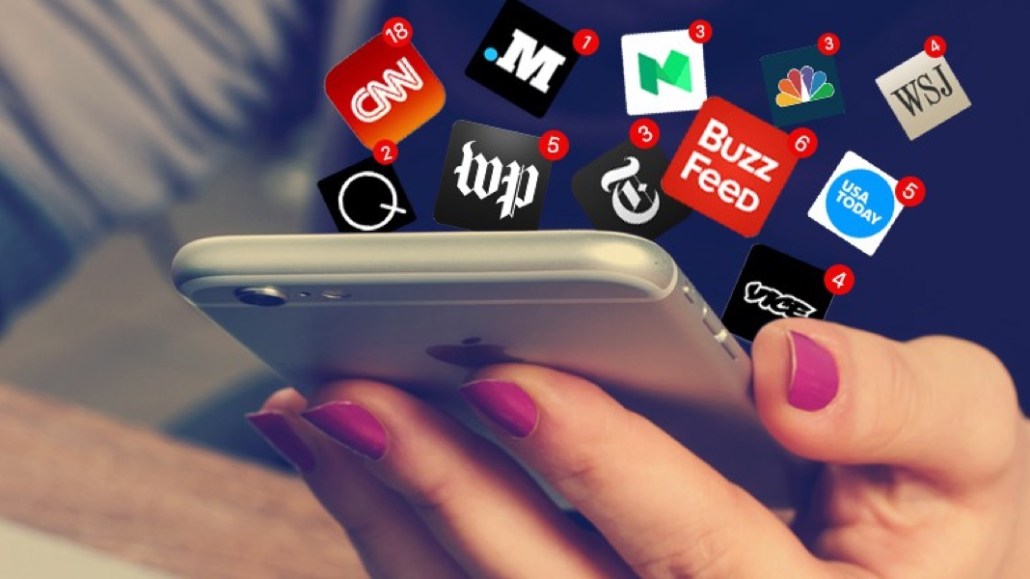 If you’re wondering why you got the same Apple News push alert from CNN a half-dozen times Tuesday afternoon, it wasn’t a coincidence. (CNN said it was an Apple News glitch, something Apple confirmed later.)

The Wall Street Journal has tripled, to nine, the number of topics that its mobile app users can follow and made it possible to “follow” its writers so users get a push when those authors publish something.

Publishers are making an effort to stand out visually. Gannett’s USA Today grew its referral traffic from pushes by 18 percent by incorporating pictures, video and GIFs into its messages. The Guardian has played with the font and style of its push notifications. CNN is will begin adding rich media to its push notifications in the second quarter of 2018.

“If they don’t identify with it, they’re less likely to engage with it,” said Larry Aasen, director of mobile development at Gannett.

These moves were already in the works when Facebook announced changes to its news feed algorithm earlier in January. But as publishers try to make up for the loss of reach in the news feed, even areas that drive small amounts of referral traffic will become more important.

“You’re seeing a lot more sophistication,” said Mike Herrick, svp of product and engineering at Urban Airship, a push notifications technology provider. “The assets that are owned are going to be the most strategic.”

Publishers pay close attention to their app audiences because their response to a story often provides a good signal for how a publisher’s broader audience will react to it. At CNN, for example, the click-through rate on its app push notifications determines whether to move breaking stories to the top of its homepage or write more stories on a developing story.

“They’re optimal for getting an early indication for how a story is playing with your audience,” said S. Mitra Kalita, CNN’s vp of digital programming. “I used to use Facebook metrics like this over five years ago. You’d look at shares over the course of 20 minutes.”

Pete Brown, a senior research fellow at the Tow Center for Digital Journalism and the author of “Pushed Beyond Breaking,” a research report on push notifications published last fall, predicts that images, automation and personalization will gain importance in pushes. Last week, Urban Airship rolled out a tool that will allow publishers to use artificial intelligence to schedule push notifications based on when the audience is most likely to interact with them.

Push notifications account for a small percentage of most publishers’ overall traffic. For USA Today, they drive just 10 percent of its mobile app opens and 5 percent of the mobile app’s pageviews.

Yet those slivers of audience are valuable. To receive a push notification, a person must have either downloaded a publisher’s app or followed the publisher inside a platform like Apple News or Google Play Newsstand, a sign of affinity.

“A lot of people would consider their push audience their most loyal, their most engaged audience,” Brown said.