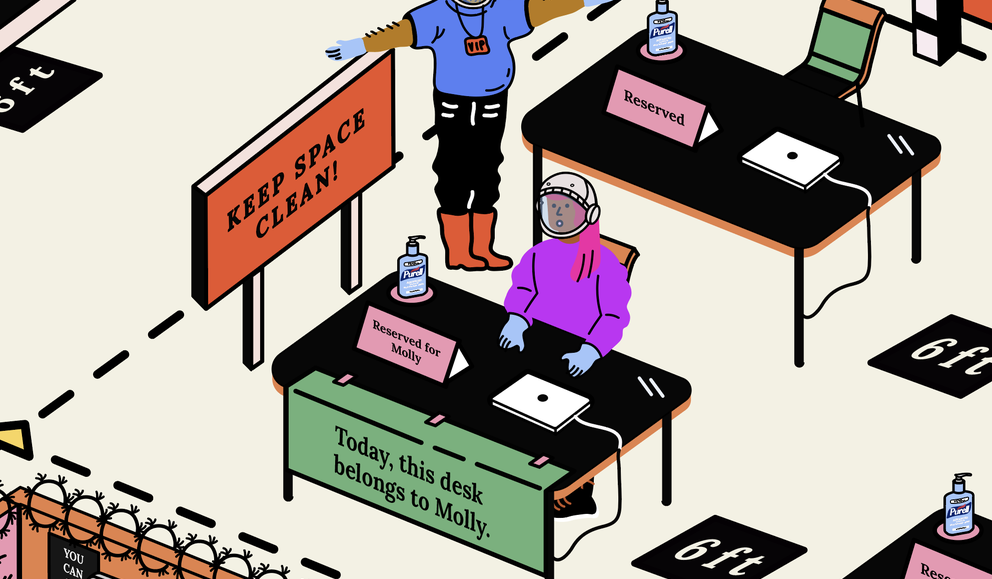 Just when it looked like it was safe to go back to the office over the last few months, the delta variant of COVID-19 reared up and sent the number of cases, hospitalizations and even deaths spiraling back upward. That, of course, threw many companies’ return to work plans into disarray.

Two agency CEOs Digiday spoke with related their differing paths that led to the same destination — a significant number of employees who returned to work without being mandated to do so.

Barry Lowenthal, CEO of Stagwell Media Network’s Media Kitchen, had every intention of mandating that everyone return to the office three days a week and give them two days of flexibility on where they work, effective this September. Then he and his management team ran into a wall of pushback, facing questions of how and why that decision was reached.

That pushback led to a self-examination of sorts, where Lowenthal said he realized the situation was better handled from a team-up perspective rather than a top-down management style. Lowenthal admitted he grew up in the Jack Welch/Peter Drucker era of management style, which was very top-down, decisive — and immovable. But the reaction of some staff, coupled with the lessons learned from working from home — that it can be done successfully — led him to change his perspective.

“It’s really hard to legislate uncertainty,” he said. “I’ve always been a believer that if you’re pushing water uphill, it’s probably better to just let it roll the way it’s supposed to. These are all management signals we all should be listening for.”

Lowenthal said he found inspiration in The Media Kitchen’s change in vacation policy a few years ago when the company allowed unlimited vacation and stopped tracking days off. At first, “it made some people uncomfortable at first, then found its own rhythm — the teams supported each other,” he said. “And if we trust them to take vacation when they need to, why can’t we trust them to work side by side as often as they need to? So we backed off” from its return to office mandate.

Meanwhile, Andrew Bailey, North American CEO of independent agency The&Partnership (in which WPP holds a minority stake), had been quietly encouraging his people back into the office since last October and implemented a voluntary three days in office, two remote since Memorial Day. To his surprise, a majority of his staffers did so willingly, up to 75% of the staff, he said. But he also found a certain segment resisted.

When looking into it, Bailey discovered that staffers in more collaborative roles (creative directors, account people and junior project managers, for example) were happy to come in, needing the interaction with colleagues that inspires innovation and fresh thought. The more reluctant segment were mostly media, IT and data/analytics staff, who “don’t have as much interaction with colleagues that requires face-to-face contact,” said Bailey.

Working to Bailey’s advantage was the extra office space The &Partnership opened in its Soho (New York) facilities eight months before the pandemic started. That extra space has been used to space people out for a safer, in-office working environment. But Bailey said the focus now is to update in-office technology — for example, he’s looking into installing new Zoom-like tech that allows each person in a boardroom meeting to be seen individually rather than a single camera focused on the entire room. “Our clients won’t be going into the office before October or maybe January. So we need to accommodate them even if we’re in the office,” he said.

The bottom line for both CEOs is, so long as the business continues to grow they’ll stick with the flexible course. “This was one of the first times I found where the best way to provide people assurance is to provide them maximum flexibility,” said Lowenthal.

Perhaps Rishad Tobaccowala, former Publicis Groupe executive and current industry deep thinker, put it best in a June installment of his “The Future Does Not Fit Into the Containers of the Past” column: “The jigsaw of return cannot be solved elegantly with every piece fitting, but if people see the big picture you are trying to solve for, they are more likely to accept or resent less whatever decisions are being made. How the decisions are made may be as important as what decisions are made.”

Although some schools are already back in session (either virtually or in-person), some don’t begin the fall semester until after Labor Day. AdImpact, a SaaS platform that tracks and analyzes ad spend data, found that from early June up to the week of Aug. 8, a total of 304,630 back-to-school ads have run across media, led by retailers, which accounted for 109,700. Among retailers, the top school-focused advertiser was Kohl’s, with 48,800 total ads.

“How to use [the acronym OTT]: Don’t. Repeat: Do not use this acronym. Please. OTT was fine for a time, but that time has passed … OTT has become synonymous with streaming, so let’s just say streaming instead. That way our friends and family members will know what the hell we’re talking about.”