There’s a growing narrative that long-form articles drive more attention time, which some are touting as the new metric of choice for digital publishers.

It’s tempting to think the Internet has not all but killed our ability to slow down and sustain our attention in an era of slide shows, listicles and other easily digestible posts. But the the truth is actually more complicated. It turns out that longer is better at drawing attention, but only to a point. Ironically, it turns out the ideal sweet spot for people’s Web attention span is about the length of a prototypical newspaper article.

We asked Chartbeat whether long articles are really worth the reader’s attention. Chartbeat looked at 200 randomly selected publisher sites across its 15,000 customer base and analyzed attention by article length. Here’s what it found:

Longer is only better to a point
Longer articles do get more attention, but only to a point. A standard-length article gets 40 percent less time than an article that’s twice as long. After the article length doubles, the additional benefits taper off. Chartbeat measures a standard-length article at 4,000 pixels, which translates roughly to a 700- to 800-word article. (The translation is imperfect, though, because pixels include images and comments that don’t change the word count.) 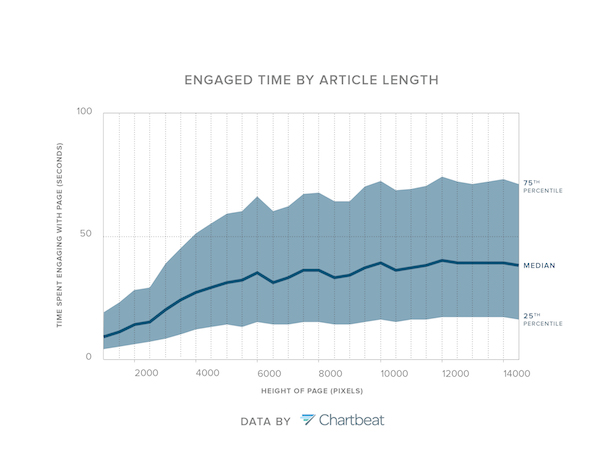 It’s good to be average
In fact, the sweet spot for consumption is in that “standard-length” range — although it’s not where the bulk of content is being produced. In the chart below, the red line represents the number of articles being produced. Most of it falls between 3,000- and 4,000-pixel articles. Most pageviews, represented by the green line, are in the 4,000-5,000 range. The blue line, showing total time spent across all articles, regardless of length, shows that the sweet spot is in the 5,000-6,000-pixel article range. 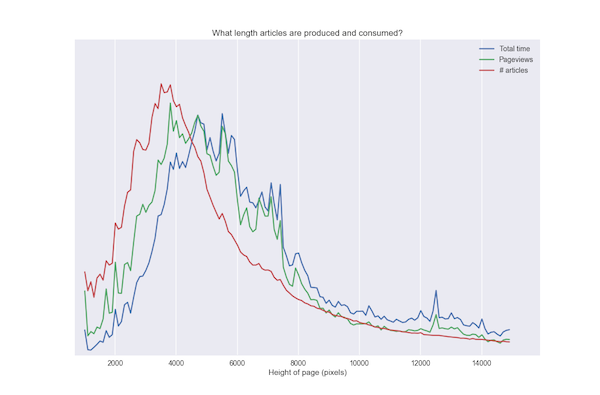 Now some publishers like The Economist and Financial Times are trying to push the idea that the time readers spend on their sites is more valuable a metric to advertisers than the size of their audience or pageviews. It remains to be seen whether time spent seeing an ad actually results in a favorable result for the advertiser, though. The proposition also may be a tough sell with ad buyers who aren’t set up to buy that way or whose clients actually need to reach a big audience.

In looking at the ad picture, Chartbeat found a direct relationship between article length and the average time that ads were in view. That’s likely because longer articles means more ads are being displayed — not that each individual ad is being seen for longer, though. As the article length extends past that standard length of 4,000 pixels, though, the ad growth tapers off.

Ad placement matters
As article length increases, so do the number of ads displayed. But not everyone spends the same amount of time reading long articles. So Chartbeat looked at how reading time corresponded with ad-viewing time. The result, in the chart below, shows that ad time definitely increases with reading time. But the ad-viewing time doesn’t keep up with the reading time because there are gaps on the page where no ad is in view. So the person spending 60 seconds viewing a page will only see ads for 30 seconds. Similarly, someone spending two minutes viewing a page will only see ads for about half that time, or about 55 seconds, which is a potentially missed opportunity for advertisers.

“They’re worried about downpage ads for fear they won’t be seen,” said Josh Schwartz, chief data scientist at Chartbeat. “But when people do scroll, there is engagement down the page. People might not even have the ads in view. So if the publisher places ads in those locations down the page where people are engaging, readers will have a chance to actually view those ads.”

Publishers may avoid putting ads at the bottom of a page out of viewability concerns. One solution is having ads that load when the content does or travel with the reader. And, if an ad appears at or near the top of the page, at least they have a shot at being seen by people who abandon the article after only a few paragraphs. 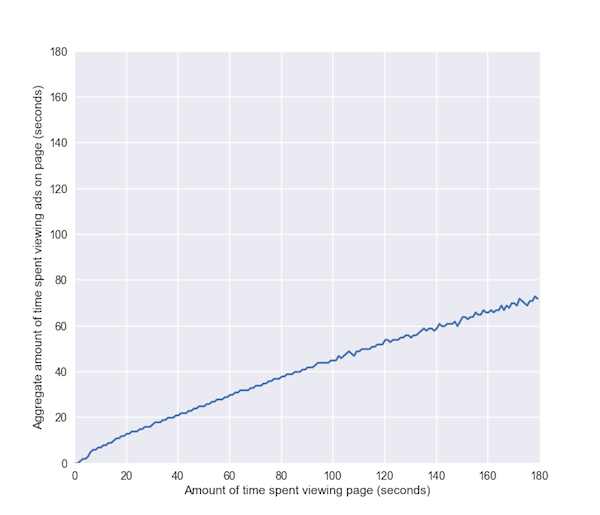