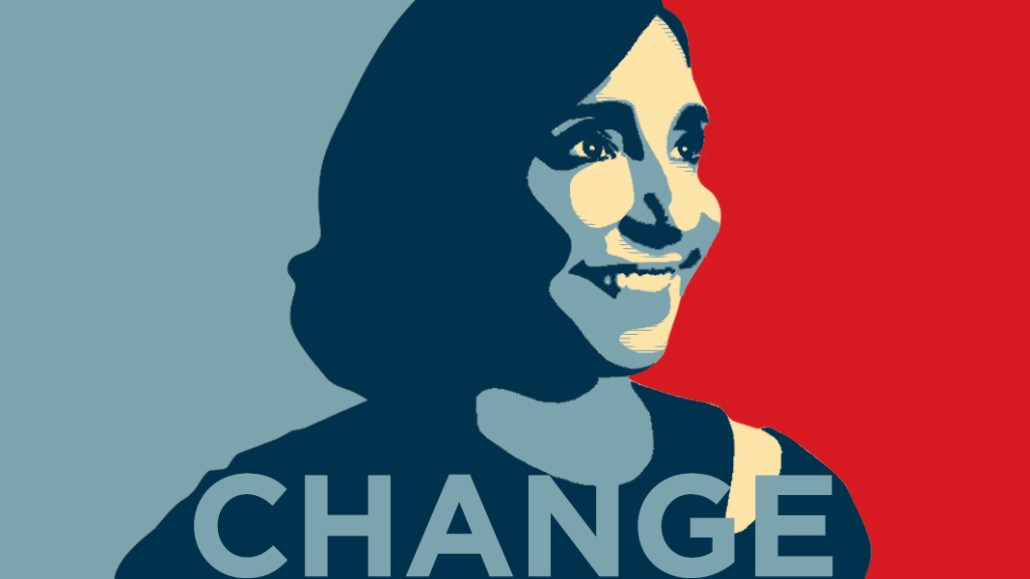 This year, buyers and sellers of media have gotten more vocal about the nagging problems that plague digital media. Linda Yaccarino wants to get people to actually do something about it.

The ad sales head of NBCUniversal has been railing at conferences, the upfronts and to the press. Her platform: Brand safety isn’t being addressed, media measurement is severely lacking, and Facebook gets too much love. Hammering the digital platforms at the upfronts in May, she said, “We don’t get to grade our own homework. I mean, what the hell is a ‘view’ anyway? Has a ‘view’ ever bought any of your products? Has a ‘like’ ever walked into a store?” In September, she took a direct swipe at Facebook after it claimed more 18- to 24-year-old users than actually exist. “If NBC was delivering nonhuman traffic, was involved in any type of the fraud or what we would call the underbelly of the business, we would be testifying in Washington,” she said.

Now, she’s inviting top people from across the media system — buyers, brands, rival media companies, digital upstarts, ad tech — and yes, even Facebook and Google — to gather on Nov. 28 to talk about these problems.

NBCU said Yaccarino wasn’t available to comment for this story. To people who know her, the call to action is a natural extension of her years of pushing for change at NBCU and the industry. “She is leading the business in a lot more ways than just talking about measurement,” said John Swift, ‎CEO of North America investment at ‎Omnicom Media Group, who called the invitation to the Nov. 28 meetup “one of the most interesting invitations I’ve gotten from someone in a long time.”

Power player
Yaccarino is serving as a complement to Marc Pritchard, chief brand officer at Procter & Gamble, who helped get the ball rolling on digital ad issues in January, speaking out about the integrity of digital advertising at the Interactive Advertising Bureau’s annual leadership conference. John Montgomery has spoken out on concerns such as viewability, ad blocking and fraud as ad-buying giant GroupM’s head of brand safety. News Corp CEO Robert Thomson has taken on the role of unofficial news industry spokesman, using his perch to assail the tech companies with names like “net Neanderthals” and “tech tapeworms.” But because all media stakeholders depend on the duopoly while competing with them, most have kept their criticisms private. And there are limitations on what companies can do together without colluding.

Yaccarino is better positioned to evangelize on these industry issues for a few reasons. There’s obviously her company’s size and breadth. She oversees more than $10 billion in annual ad revenue and as such, has a huge stake in maintaining advertisers’ faith in advertising. NBCU has amassed stakes in Snap and premium digital companies like Vox Media and BuzzFeed and sells their ad inventory, and it’s the exclusive seller for advertising in Apple News, all making it a bigger competitor for the digital ad pie that’s dominated by Facebook and Google. Parent company Comcast’s cable distribution business makes it platform-like. Pushing an industry agenda helps NBCU’s competitors, but it also helps NBCU.

“She’s been in a leadership position longer than [her rival counterparts], and [NBCU is] the biggest player,” said Brian Wieser, senior analyst at Pivotal Research Group. “Their portfolio goes beyond spots and dots. Comcast has the ability to look over longer time horizon with some impunity. They can set an agenda.”

Digital media’s credibility crisis
And people are paying attention because there’s a sense of urgency and growing momentum to deal with digital media, which is now widely acknowledged to be a mess. Digital media has long been a cesspool of fraudulent traffic, unseen ads and offensive content, but it took the 2016 U.S. election when fake news and Russian ads were discovered on Facebook and Google for media buyers and sellers to really get vocal about it. The difficulty measuring audiences across screens is nothing new, but Facebook’s measurement screw-ups have lately piled up.

Sensational stories about outrageous content making its way onto platforms aside, there’s a need for clarity in how to define media’s value in a world where eyeballs and content can mean many different things.

“We’ve got to find a way to define the value of media beyond just price,” Swift said. “Not all platforms are created equal in terms of how advertising plays on them and how consumers react. We also don’t have an apples-to-apples way to compare metrics across all these different platforms as there is no standardized set of completely transparent metrics that everybody agrees on. Is it duplicated or unduplicated? How many users are actually active on a platform? What is the time spent, and is it meaningful? Linear television has a lot of gaps, too, as Nielsen only measures potential exposure to a message.”

Yaccarino has earned credibility, having pushed for change over the years and bucking the status quo. In 2015, she dumped Nielsen for CNBC because the measurement service didn’t measure out-of-home viewing of the financial news network in places like gyms and offices. She has protested the second-class status for cable in the TV buying process. At NBCU, which she joined in 2011 after 15 years at Turner Entertainment, she combined 15 sales teams for broadcast, cable and digital properties that were, as she put it, “allergic to collaboration.” She has a reputation for being a tough negotiator for higher prices but also being attentive and willing to compromise.

She peppers her conversation with cooking references and self-deprecating humor. Describing her early, heady days at NBCU as like being a contestant on the reality show “Naked and Afraid,” she said, “I’m pretty sure they don’t let you wear Spanx. So for me, it was a living nightmare.”

Like a good politician, Yaccarino also has a history of collaborating with other broadcasters. NBCU regularly includes rivals at its annual spring “innovation” day; a recent one showcased Pepsi’s integration into Fox’s “Empire.” “This is an NBC day, and she’s focused on a Fox success story,” said Michael Kassan, founder and CEO of media adviser MediaLink. “I’m sure she would want NBC to have the advertising, but she realizes this is an industry issue. She’s taken a collaborative approach to a competitive industry.”

The change agenda
It’s anyone’s guess what will come of the stump speeches and summits. Past efforts to unite media companies in consortia toward a common goal have fallen short. Short of that, there’s a desire to, at the least, come up with a vocabulary for things like brand safety that everyone can agree on.

Even if Yaccarino’s motivations aren’t altruistic, others are glad to get on board. When someone of her stature draws attention to the need to bring order to digital advertising, it gives buyers leverage with other sellers to follow her lead. “It creates positive leverage,” said Lou Paskalis, svp of customer engagement and investment for Bank of America.

And companies can only affect so much change on their own, said Joe Marchese, Yaccarino’s counterpart at Fox Networks, where he’s president of advertising. “Even on the Fox side, it may not be we have to change the way we work; we have to change the industry,” he said. “Institutional change alone won’t get us there. It’s almost like I’m grateful people like Linda are realizing that.”