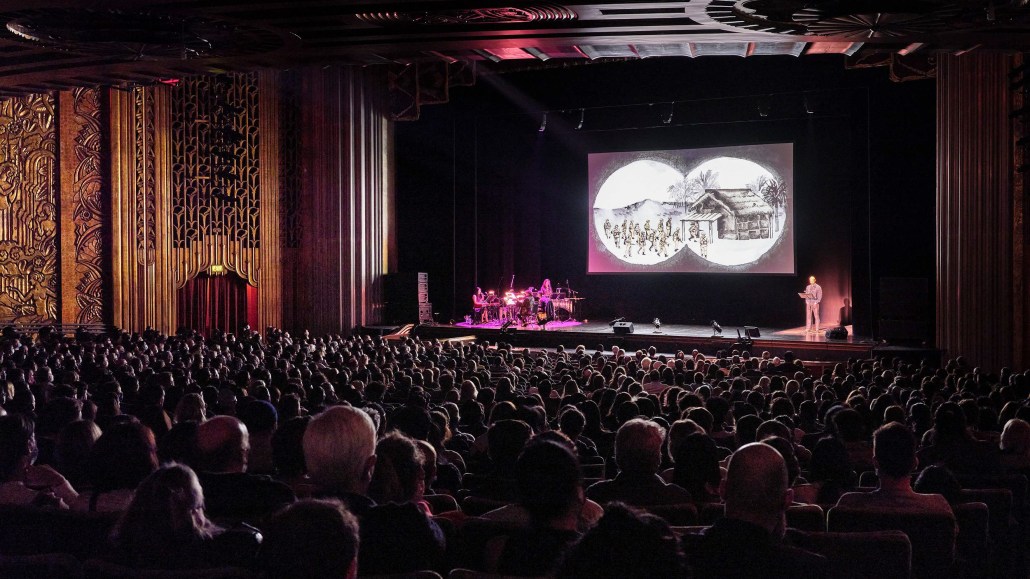 For Pop-Up Magazine, the return to live in-person events this month meant more than the return of incremental ticket revenue and additional advertising spots. For the traveling storytelling company, it was the return of its largest business as well as bringing its community of fans back together for the first time in over 20 months.

The tour’s return was paired down, however, to only one performance in four different cities in the U.S., including Oakland, Los Angeles, New York City and Washington, D.C. The main consideration being that these cities would likely have enough fans of the brand who would come out and fill up the theater, with the expectation being that there would be some people who aren’t ready to return to in-person events yet, said Chas Edwards, publisher and president of Pop-Up Magazine.

The BAM Howard Gilman Opera House in Brooklyn, however, was packed on Tuesday, Nov. 16.

That theater holds just over 2,000 people between the orchestra, mezzanine and balcony and from what I could tell, nearly all levels were filled with masked and vaccinated guests — which was required for entry. And as soon as the first few notes were played on the keyboards by Minna Choi, the music director of Pop-Up Magazine, some of the attendees started dancing in their seats while others clapped and whooped as the lights dimmed and the show got started.

I assumed, based on the excitement, that most of the audience knew what was coming, meaning they’ve attended the tour before and were excited about its return after all these months. But when two Pop-Up Magazine producers at the start of the show asked the crowd to put their hands up if it was their first time attending the tour, it was a near-even split of hands up and hands down in my section in the center orchestra.

Despite a large quantity of new faces, there were several people around me who were legacy fans of the show, and even a few members of Pop-Up Magazine’s paid subscription program, who got excited and whispered “That’s us!” to each other behind me when the program was plugged at the top of the show.

What’s particularly interesting about that is that Pop-Up Magazine’s membership program wasn’t launched until the pandemic, meaning that the most significant perk of being a member — the early access to tickets — wasn’t available until before this tour.

“When we rolled out the membership program, we knew the most exciting benefit was [that] members will get early access to buying tickets when we go on tour,” said Edwards, adding that the “good seats” in the orchestra section typically sell out in under 15 minutes. “That benefit was dormant. What we’ve seen is a lot of new members joining because that perk is now being delivered,” he added. The return tour did not fully sell out, according to Ticketmaster, which still had available tickets for the D.C. show the day of the event.

Ranging from $39/year to $399/year, the membership was one of the new businesses rolled out during the pandemic (as well as sponsored live video streams and an “issue in a box” that was mailed to paying customers) to keep Pop-Up Magazine afloat, especially after it had to close down its California Sunday print magazine business following former parent company Emerson Collective excising Pop-Up from its portfolio in October 2020. Heading into the tour, Edwards said the number of members is in the thousands range, and still relatively small compared to the rest of the business.

There were other restrictions to being back in-person before the pandemic has officially come to an end — though a true end is hard to define. One of those restrictions was not being able to get the full sensory experience that Pop-Up Magazine strives to offer.

“We have full theaters where everyone’s wearing a mask so that limits our ability to play with smell, play with taste in this show,” said Edwards, adding that in previous years, audience members were given a cookie to eat at the same time during specific stories to heighten their emotional reactions. “But that doesn’t mean we can’t create big spectacle moments.” 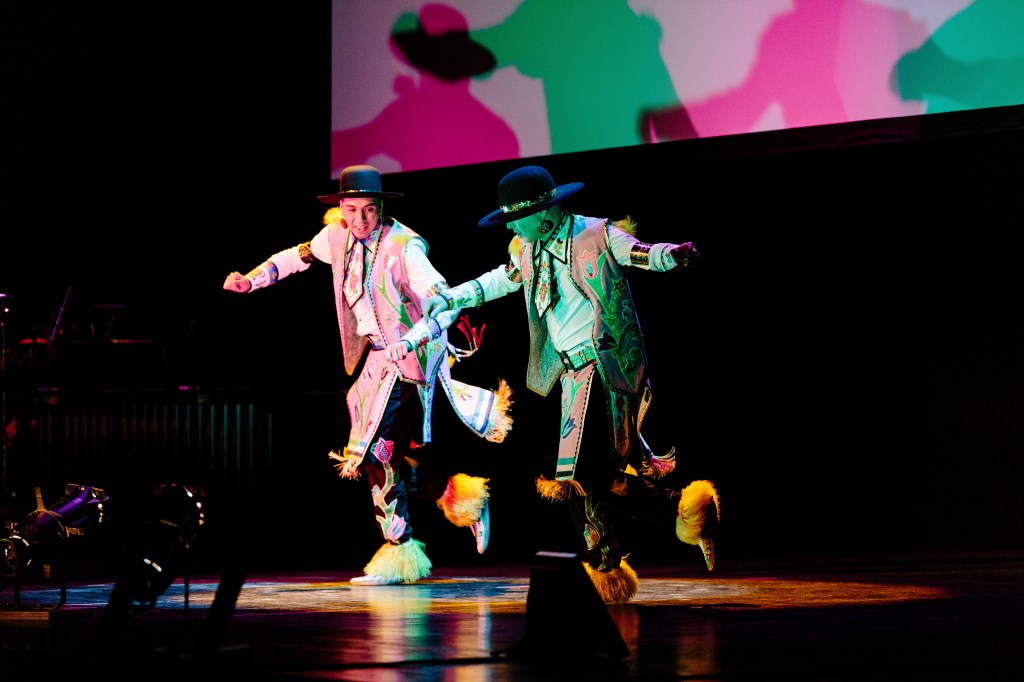 One of those moments took place during the story “Dancing Against The Drum” by Ben-Alex Dupris, whose subjects were Sean Snyder and Adrian Stevens, North American Indigenous dancers who compete at powwow ceremonies across the country. Snyder and Stevens identify as a two-spirit couple, which is a term encompassing same-sex relationships in their culture. The story follows them getting denied the chance to compete in the Sweethearts dance, a traditional dance for long-term couples, but a year later being allowed to compete and taking home the third place prize.

The story had captivated the audience who clapped and celebrated when it was revealed that they would be allowed to compete together in the end. Then, as the story concluded, Durpis invited the couple to the stage, who was met with a thunderous round of applause and a standing ovation. I’ll admit I was choked up myself. Snyder and Stevens then performed their Sweethearts dance, accompanied by teal-and-pink lighting cues that complemented their matching outfits.

Edwards said in our interview that a lot of the stories were meant to be upbeat — more optimistic than previous years’ tours, given the heaviness of the past nearly two years. However, there were several stories that drew tears to the eye, including one called “Captured” by Ian Urbina that followed a Libyan migrant trying to get to Italy and being detained and subsequently murdered by his own country instead.

Those stories were sandwiched in between the ones that felt more like stand-up acts mixed with a little bit of spoken word poetry, including “Why Do You Ask?” at the beginning of the show by Chanel Miller and “The Fence” by Jon Mooallem at the end, that left the audience full-on belly-laughing multiple times.

While it’s unknown whether or not the return of the live Pop-Up Magazine will boost the membership business, the audience seemed truly engaged throughout the 90-minute show, and I walked away with the feeling that the group of people brought together by Pop-Up magazine just experienced the whole show as a community.