In depth: How Digiday reporters are mapping the metaverse 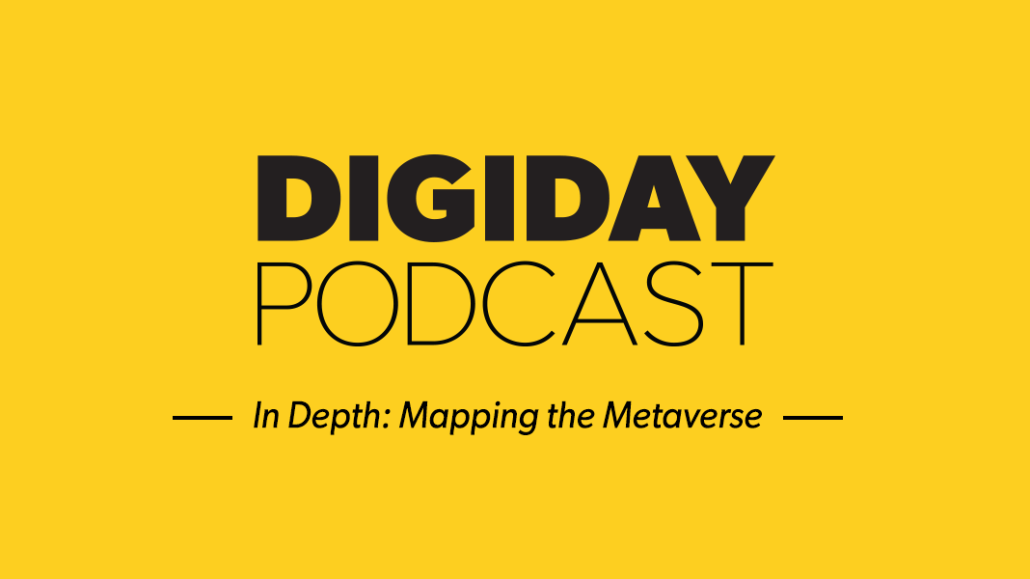 To many, the metaverse might feel like an obscure, perhaps mysterious, part of the internet that’s exclusive to gamers, NFT collectors and over zealous tech CEOs.

However, as the metaverse develops, the truth is that it has the potential to reshape the entirety of the online world in ways a lot of people don’t expect. The metaverse could be the solution to universal ID, a way to better connect scattered workforces and provide a new e-commerce strategy for brands and retailers looking to reach younger consumers.

“Really the most important thing when people say the word metaverse is that they’re just talking about a version of the internet, where when you go to Reddit or you go to Facebook or you go to Instagram, you are the same person,” said Digiday esports and gaming reporter Alexander Lee during the latest episode of the Digiday Podcast. “You don’t have different profiles or identities across those platforms. You are just yourself moving around in virtual space.”

But to get to that point, there is still much to be built and executed on, in order to achieve the idyllic version and the truest form of the metaverse, Lee said. During this episode, Lee provides a detailed discussion of one of the fastest growing parts of the internet and that stands to reason will be a big topic for 2022.

Continued reading on Lee’s coverage of the metaverse:

Later this spring, Lee will be releasing his own mini-series to Digiday listeners that continues this deep-dive into the metaverse. Stay tuned for future updates on the release date.

Below are highlights from the conversation, edited and condensed for clarity.

The present metaverse and the future metaverse

There are a lot of different competing definitions for the metaverse right now, if you speak to a representative of different platforms — like Meta, or Roblox, or Fortnite, or what have you — they’ll all say something a little different. The modern conception of the metaverse at its core, hinges on the concept of a more immersive and persistent successor to the internet. And what that means is essentially a version of the modern internet in which your identity is persistent across platforms, and also a version of the internet in which events that happened and actions that you take are also persistent. You know, you can make a change to a virtual space, you can leave and then come back 20 days later, and that change will still be there. The idea of the metaverse is just an internet in which, just like in real life, the things that we do stick with us and the way that we form our own identity is consistent across, you know, all the ways we present ourselves and all the different people we talk to.

Interoperability and platform collaboration is key

I really think that interoperability is the crux of what makes something into a true metaverse. The concept of interoperability essentially means that you can transfer identities and virtual assets across platforms. So the concept of true interoperability would be expressed in, for example, acquiring in-game currency or items in Fortnite, and then being able to use those items and currency in Roblox, which is a completely different game/platform.

Brands and retailers stand to monetarily benefit from metaverse commerce

The most exciting thing, at least in terms of brands getting involved in the metaverse, is that it’s like an entirely new e-commerce opportunity to sell virtual goods that actually have some kind of value. So a lot of people roll their eyes at the mention of NFTs, which is fair. And if your conception of NFTs [are] only Bored Ape Yacht Club profile pictures, then I understand and share your antipathy towards the concept. But where they can actually have value is a virtual world where items can literally be used. All of a sudden, we’re seeing brands like Gucci, Vans — mainly fashion brands, to be honest — investing and creating digital versions of their garments that can actually be worn. And that’s really powerful. I think virtual commerce is an even more accessible way for brands to start reaching consumers who might not otherwise be able to purchase their products, especially like the younger people who don’t have as much disposable income, but spend their whole lives inside of these platforms.