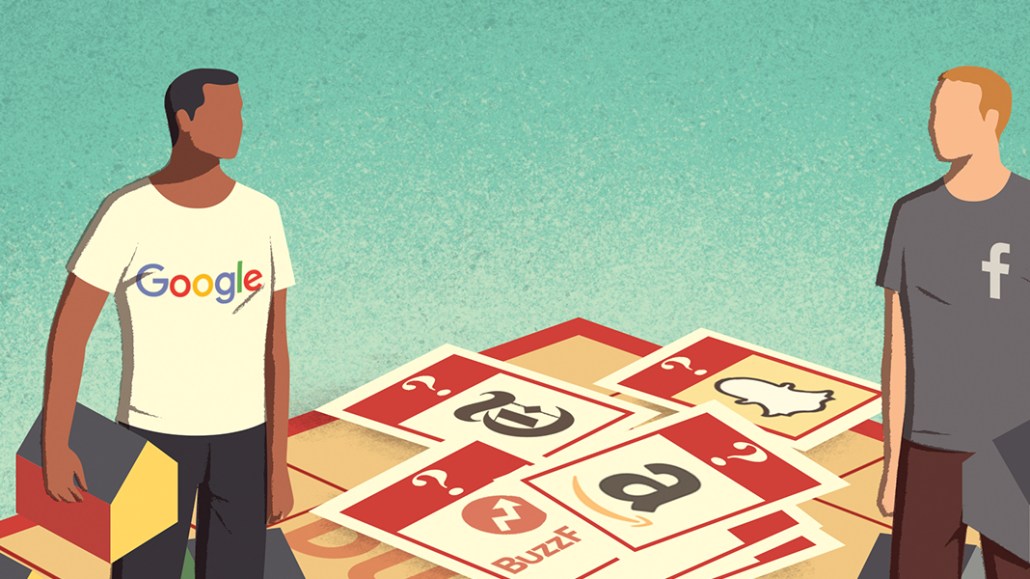 At the Digiday Moguls event in March in Vail, Colorado, we sat down with 33 C-suite publisher executives to get their thoughts on publishers’ relationship with the Google-Facebook duopoly. Check out our earlier research on European publishers’ international expansion plans here. Learn more about our upcoming events here.

Concerns about the duopoly persist
With eMarketer projecting that Facebook and Google would gobble up 63 percent of the amount spent on digital advertising in the U.S. in 2017, C-suite publisher executives at the Digiday Moguls event were understandably concerned about the duopoly’s dominance. Sixty-three percent of the executives surveyed said they were concerned, while 9 percent said they were not very concerned or not at all concerned. 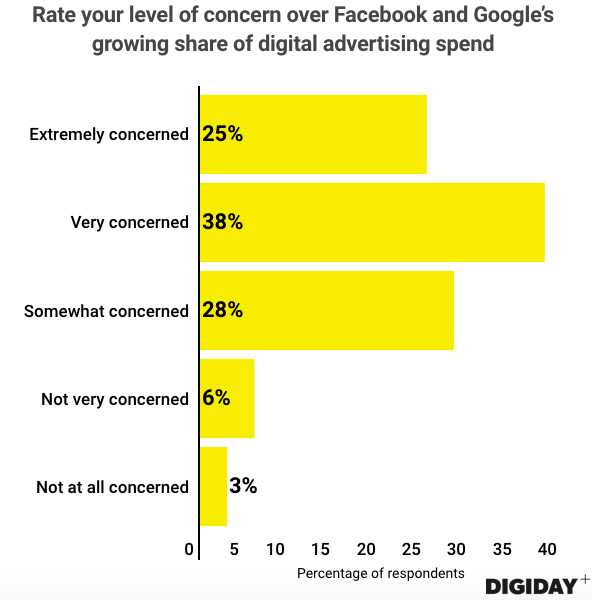 For the first time in the recent years, however, the duopoly is projected to capture a lower share of spending on digital advertising in the U.S. than the previous year. In 2018, eMarketer predicts the duopoly’s share of U.S. digital ad spend to be 56.8 percent, down from 58.5 percent last year. Furthermore, 48 percent of new spending on digital advertising in the U.S. will go to Google and Facebook, down from 73 percent in 2016, per eMarketer.

These projections shouldn’t mitigate publishers’ worries, though. Most new digital advertising spend is going to platforms such as Amazon or Snapchat, and publishers are still fighting over the leftovers.

“The real issue is that Facebook and Google are taking 85 to 90 percent of every new dollar in the marketplace, and we’re fighting for scraps,” said one anonymous executive at the Moguls event. “The issue is not how Facebook is screwing me with distribution. They have a business to run.”

Publishers won’t cut ties with Facebook and Google
Publishers love to gripe about the duopoly, but they won’t end their relationships with the platforms anytime soon. Ninety-seven percent of executives surveyed by Digiday view the platforms as frenemies, and no one considered them friends. Google and Facebook still provide 70 percent of publishers’ referral traffic. 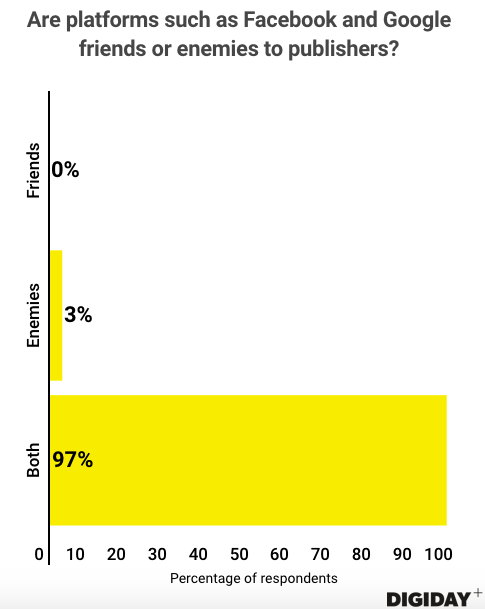 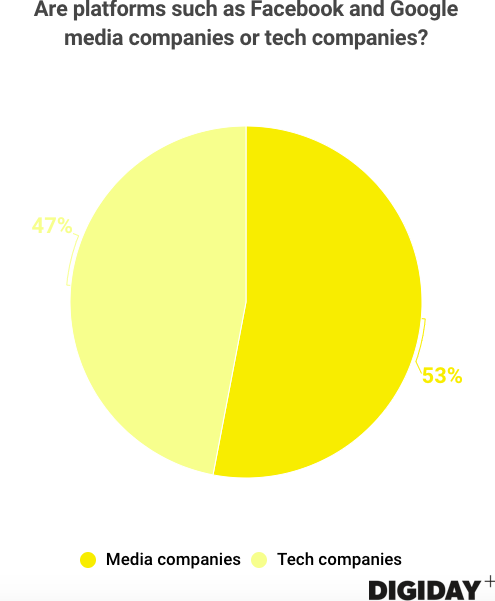 Publishers still have time to diversify audience sources
In the aftermath of Facebook’s recent news feed change, publishers are scrambling to adjust their business strategies to avoid shutting down like Facebook-reliant peers Cooking Panda, LittleThings and Rare.

Two-thirds of the respondents to Digiday’s survey believe there’s still time for Facebook-dependent publishers to diversify their audience sources. 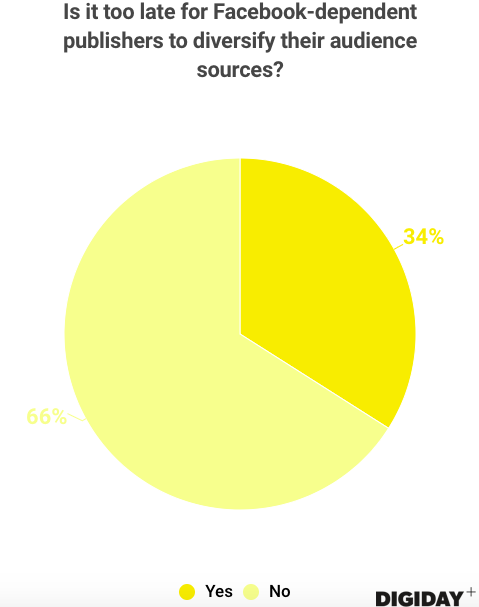 NowThis relaunched its website after Facebook’s change, and social publisher Attn is producing more original video series for TV and Facebook Watch. Getting audiences to leave Facebook for owned and operated sites is difficult, but could pay off. Digiday research found that publishers make most of their money from digital video on their own sites rather than on Facebook.

Ad-blocking version of Google Chrome evokes mixed feelings
Last month, Google turned on the ad blocker in the latest version of its Chrome browser, a move it said is designed to remove intrusive ads that harm user experience. Google will rate publishers’ websites based on the Better Ad Standards from the trade organization Coalition for Better Ads, blocking ads on publishers’ pages if they fail to adhere to those standards. Many worry about the conflicts of interest this poses for Google, as the world’s largest ad seller also becomes the arbiter of what ads are acceptable.

Respondents to Digiday’s survey have mixed feelings about the Chrome ad blocker. Forty-seven percent believe it will create a better user experience for site visitors, and 44 percent believe it’s a dangerous overreach by Google. (Percentages exceed 100 percent because respondents were allowed to select multiple responses, though few did.) 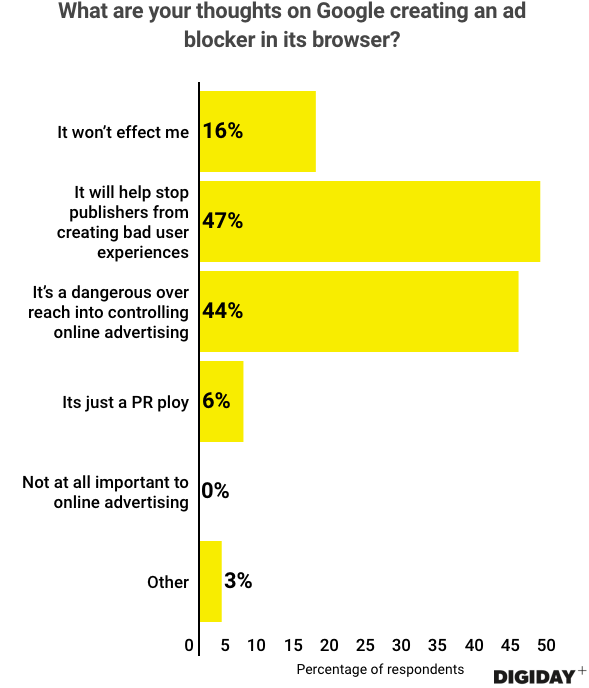