At the Digiday Publishing Summit Europe event last month in Monaco, we sat down with over 80 European publishing executives to learn how important expanding internationally is to their businesses. Check out our earlier research on media buyers’ fear of consulting firms here. Learn more about our upcoming events here.

Making money in media is no simple task. Simply amassing huge audiences isn’t enough to result in a profitable business. As publishers chase audiences and diversify their revenue streams, one strategy for publishers is to expand to new international markets. Forty-eight percent of the 84 European publisher executives Digiday surveyed said international expansion was at least a very important business strategy. 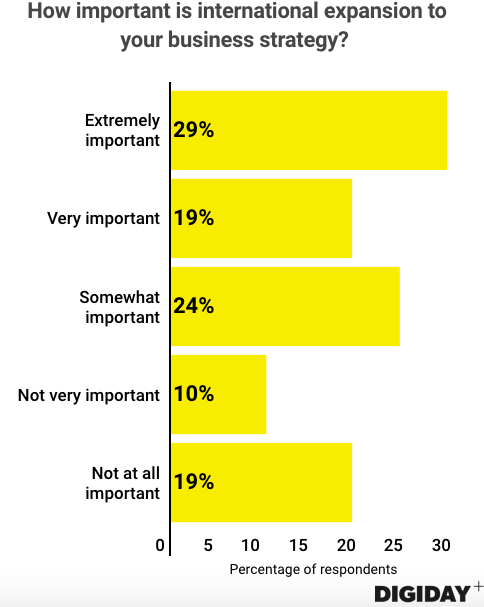 For Europe-based companies looking to expand across borders, language could prove to be a hurdle. Owned by German company Axel Springer, Business Insider has expanded to 16 international markets, but not without difficulty. Despite its strong international following, Business Insider struggles to translate articles for each market.

U.K.-based Copa90 will avoid that issue by launching in the U.S., which has a growing soccer fandom that appeals to the publisher. French art-focused publisher Fubiz also expanded to the U.S. and London because its videos are produced in English, limiting the audience it could build in France.

Other companies are restricting their international expansion to Europe — at least for now. Axel Springer-owned mobile news app Upday opened six regional offices to enter 16 European markets. Upday has an exclusive partnership with Samsung that prevents it from appearing on iOS devices, making it difficult to expand beyond Europe, which favors Android devices. Apple, whose devices run iOS, recently grew its share of the smartphone market in the U.S. to 56 percent.

Not all European publishers are expanding. Some, like The Guardian, are downsizing to cut costs.

Post-Facebook news feed change, publishers will have to find new ways to build audiences that make international expansion a viable business option. Given the fears that the looming General Data Protection Regulation will reduce digital advertising revenues for publishers, expanding internationally, while challenging, could become a bigger priority for more publishers.