Why Matches Fashion is investing more in shoppable video 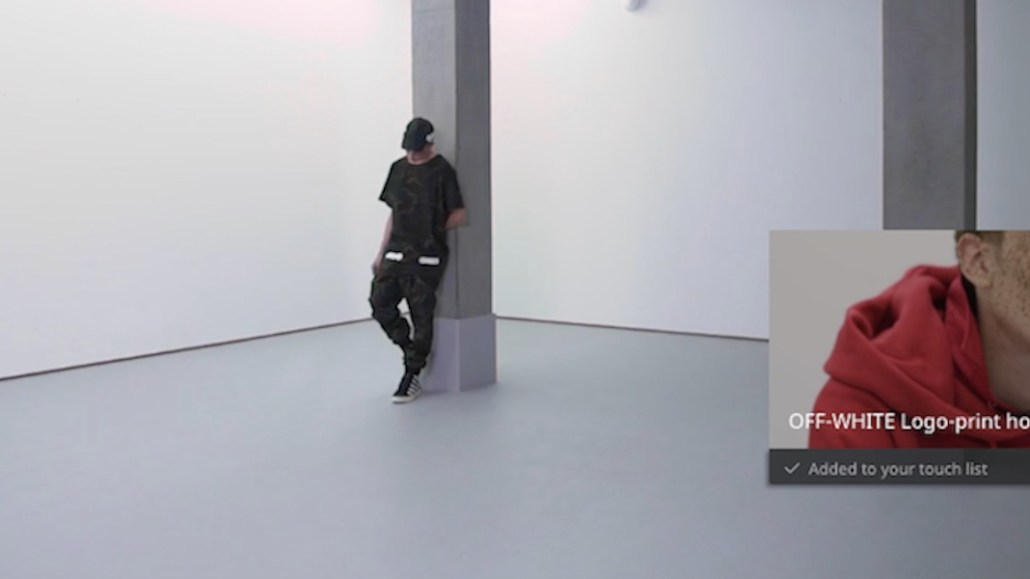 This year, Matches expanded its video team from one employee to six to support a marketing agenda that aims to produce about one video per week. The strategy: Anchor video content around the retailer’s exclusive capsule collections and designer-driven trunk shows, which are important sources of revenue and drive 30 percent of the company’s total sales. To make sure the company is seeing actual return from the time and money spent on its video output, each one is shoppable.

The retailer has been working with shoppable video platform Cinematique for the past three years to create shoppable videos that typically revolve around the announcements of new collection drops, like a barely-minute-long spot that showed Virgil Abloh, the designer of the brand Off-White, styling a model in the newest collection he had designed exclusively for the site. The videos, which live on Matches Fashion’s online content blog, as well as Facebook, are product-heavy, with most featuring around 70 items in the course of their two- to three-minute runtimes.

As the videos play, viewers are prompted to click the screen wherever they see an item they want to shop. When they do, a box with an item image and description appears in the lower left corner to signal that it’s being saved for the viewer, before disappearing after a few seconds. When it’s over, all the saved products are listed with more detail, like price, and paired with a buy-now button. That button sends the customer to the product page on the Matches site.

For luxury fashion brands, video strategies typically center around involved productions that cost a ton but see little pay off, since such “fashion films” are not easy to link to ROI. The shoppable video, which has existed in some form for years, was seen as a clunky product push that deteriorates the quality of the video itself. To solve for that, Cinematique’s chief strategy officer Kyle Heller said that it worked directly with Matches Fashion to figure out a way to make shoppable video that still felt like a luxury product.

“We learn a lot from clients, and Matches has done about 120 videos with us, so seeing what moves the needle for them is important,” said Heller. He said that when it launched its first video player, it used hot spots and tags to indicate “touchable” moments, where products could be saved to shop later.

“We realized, in conjunction with Matches, that it’s against human nature to lay things over the video, because it’s distracting,” said Heller. “So we let the video be the star, and the interactive moments come later.”

So, while the video’s playing, users can touch anywhere. The cart will alert them if they successfully added something. According to Cinematique, this had led to customers watching a video more than once to make sure they didn’t miss anything. The Off-White video posted by Matches had an average view time of four minutes, despite being just over one-minute long.

Beyond tying video content directly to purchases, Matches Fashion is working with Cinematique to get more insight on its collections and product launches through the video platform. Cinematique CEO Paul Dawalibi said that every viewer’s action is tracked, and the company feeds that information back to the brands. That insight helps Matches shape its video strategy, as it’s learning what kind of product categories perform best in a video setting, as well as learn more about the product performances.

“We have a deep set of data that shows brands what people are touching, what’s converting and what’s not,” said Dawalibi. “We’ve had situations where a client wants to make something not touchable in the video, and we can report back that 20,000 people touched on this, there’s clear interest in this. That’s data we can give that no one else.”