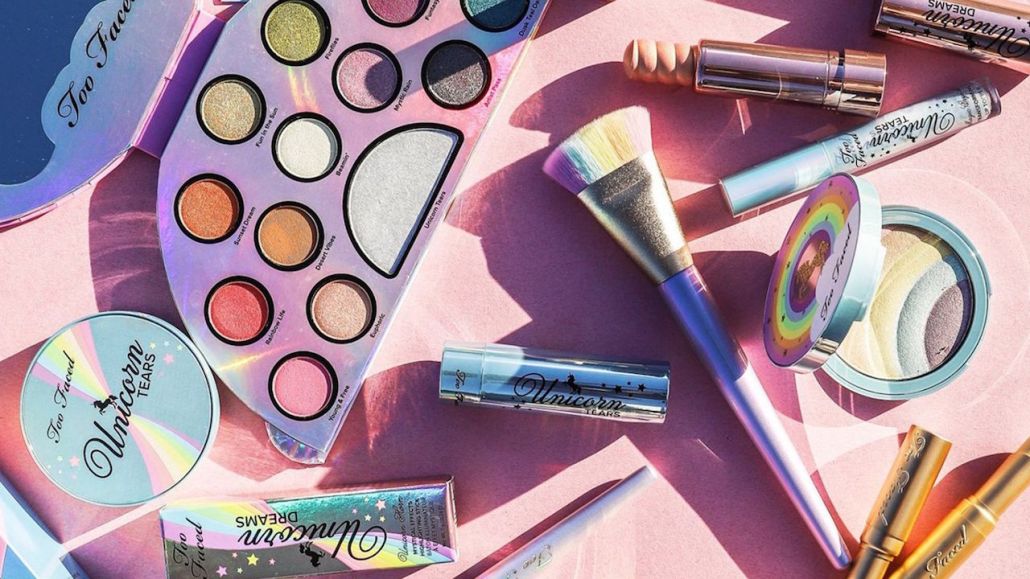 Too Faced is proving  you don’t have to be a socially native beauty brand like Glossier or ColourPop to dominate the online conversation. The cosmetics brand, which was founded in 1998 and is known for its Better Than Sex Mascara, is currently on track to be one of the leading brands on social media for 2018.

From the start of the year until February 23, it’s grown its Instagram audience by 4.5 percent, resulting in over 10.2 million followers, according to a new analysis from ShareIQ, an earned media performance platform. That’s far ahead of more traditional competitors like Maybelline and L’Oréal, which have 6.4 million and 4.6 million followers on the platform, respectively.

Too Faced has seen significant gains in engagement — considered by many to be a more important metric of brand loyalty — on Instagram, too.

During the same period, it got 15 times the engagement of Estée Lauder and four times that of Revlon, both headliners in the category in ShareIQ’s last analysis, in October. A separate analysis from the visual intelligence platform Dash Hudson found similarly positive results: Too Faced’s average weekly engagement ratio is 0.8 percent, compared to its competitors’ average of 0.51 percent. That’s resulted in over 17.1 million likes on the platform so far this year and more comments than most of its peers.

Clearly, the brand — which was acquired by The Estée Lauder Companies in 2016 — is doing something right.

Partnering with like brands and influencers
Too Faced is capitalizing on outside influence as much as possible.

Its exclusive partnerships with Sephora — in which certain products like its White Peach Eye Shadow Palette are available only at Sephora or on toofaced.com — have paid off significantly, said Jonathan Gardner, ShareIQ’s director of marketing. In fact, they’ve resulted in some of the brand’s highest-performing visual content.

The two images below, for example — both of which tag Sephora (which has nearly 14 million Instagram followers) — garnered more than 600,000 likes. The second one, which went one step further with the #SephoraLovesTooFaced hashtag, drove significant new traffic to the Too Faced account, according to Gardner.

Naturally, the brand works with plenty of online influencers, too, ranging from Instagram model Alissa Ashley (676,000 followers) to the beauty vlogger Rose Siard (357,000 followers). Almost every other post on its Instagram feed features either a photo of an influencer or a tag. Some influencers, like Ashley, are clearly paid, considering the #ad inclusion on their Too Faced-related posts, while others are likely the result of a robust gifting program, said Helene Heath, a senior editor at Dash Hudson.

“Fostering strong relationships with powerful beauty influencers has proven to be a winning strategy time and again in the industry,” she said. “With a visually focused niche like makeup, it’s one of most effective ways to guarantee growth.”

Indeed, the bulk of its content — a combination of selfies, video tutorials and product shots — is user-generated, with only the occasional brand-lensed product shot sprinkled throughout.

The brand certainly has a lot to choose from: Overall, there are an average of 20,269 pieces of this type of content created by its fans each week, according to Dash Hudson. That’s more than double the weekly average of traditional competitor L’Oréal (10,781) and social media phenom Lime Crime (4,429).

According to Thomas Drew, a social media strategist at the creative agency BlkBox, it’s also important to note the diversity reflected in Too Faced’s reposted content.

“Multiple races and ethnicities are highlighted on the page to show its product flexibility, which only positively contributes to their brand sentiment and creates a more welcoming environment for engagement on their posts,” he said.

“Brands that cross-post content get higher engagement overall and drive their audiences to engage with all of their individual accounts,” said Gardner. “It also drives a significantly higher earned media value for each piece of content.”

An image of Too Faced’s Festival Collection that was first posted to Facebook, for example, received 20,000 reactions on the platform. When the brand reposted it to Instagram, it then garnered more than 260,000 engagements (the sum of comments and likes). Similarly, this image of its cheekily-named Glow Job Glitter Mask was first posted to Instagram, where it got 243,000 engagements, and then on Facebook, where it got 6,800 more.

“Brands that drive higher value think of visual content as not just a single post that has a short life of 72 hours or so on Instagram,” said Gardner. “They look at the entire lifecycle [available for] content.”

And it’s not just imagery the brand is sharing — Too Faced’s savvy use of hashtags is smartly deployed across Facebook and Twitter, as well.

For its branded holiday promotion on February 10 — dubbed “International Better Than Sex Day,” as an ode to the company’s beloved Better Than Sex Mascara — Too Faced used the #betterthansex hashtag across Instagram, Facebook and Twitter to promote various giveaways. The hashtag, which was already in use before the launch, now has roughly 100,000 posts on Instagram alone.

Too Faced is following a similar template to celebrate the recent launch of its festival-themed makeup collection. The #tflifesafestival hashtag is being used on all relevant content cross-channel, encouraging users to spread the conversation from platform to platform.

“The brand focuses on a single theme and pushes it hard across all channels, driving consumers to seek out the campaign on every social network they use,” said Gardner.