Why beauty brands keep investing in chatbots, despite growing pains 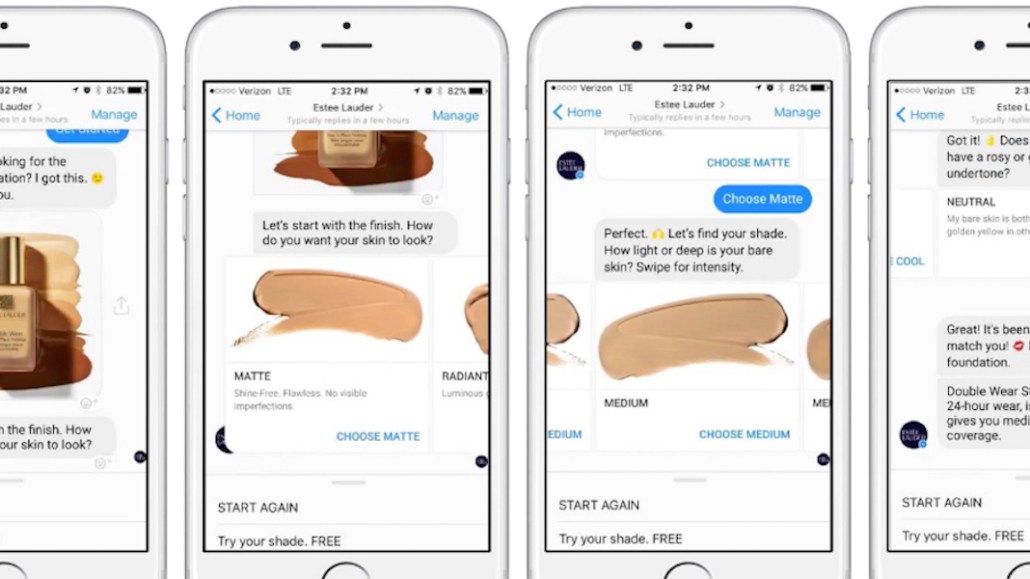 Although the fashion industry has struggled with its chatbot strategy, beauty brands are placing more confidence in the technology. Brands including Sephora, Estée Lauder and L’Oréal have all rolled out chatbots in the last year, with more planning to launch in the coming months, including Coty and at least four undisclosed brands partnering with AR platform ModiFace.

Beauty’s edge in the space can be attributed largely to its reliance on AR technology, thanks to its virtual try-on capabilities that have helped solve for the industry’s oft-cited “try-before-you-buy” conundrum with e-commerce. Now, beauty brands are incorporating the technology into their bots for the same effect.

“Intuitively it makes sense that you’d have better use-cases with beauty brands using chatbots,” said Christian Brucculeri, the CEO of Snaps, a chatbot startup that has worked with companies including L’Oréal and Sephora. “Fashion is much more of a social experience, whereas beauty is more personal, and messaging succeeds with personalization.”

Divya Gupta, the executive director of Estée Lauder’s digital technology team, said the company has seen both conversions and website traffic driven by the five bots it has introduced in the last year, though she declined to share specifics. The use-cases across its bots include the Foundation Finder (available in two versions for the U.S. and U.K.), which helps customers identify the best foundation shade from Lauder’s namesake brand; The Regimen Finder, for La Mer, which utilizes a Q&A to develop personalized skin-care regimens for shoppers; and a U.K.-only app for Smashbox that provides tips and inspiration.

“Chatbots are allowing consumers to reach our brands 24/7 on platforms they’re already on, like Facebook Messenger,” she said.

Though the technology was initially used to field more mundane customer service questions, like how to find a store or return a faulty product, it’s now become a savvier virtual store associate for many brands, often tying in augmented reality to offer personalized product recommendations and beauty tips, as well as try-ons.

Sephora’s Virtual Artist and Estée Lauder’s Lip Artist (it’s fifth and final bot, for now) allow customers to try on a wide range of makeup shades by uploading a photo of themselves into messenger. They can either select a shade themselves or use the app’s skin-matching technology to get a recommendation for their skin tone. Afterward, they can click out to each brand’s respective website to shop the product and download the image to post on social.

Other bots — including Sephora’s Reservation Assistant and Smashbox’s bot in the U.K. — help facilitate appointment bookings at local stores.

Not every category in the industry has adopted the technology as readily as cosmetics. Tackling hair care remains a challenge, as hair strands are known to be harder to track with augmented reality than facial features.

There have been attempts in the space: Professional hair color company Madison Reed has a bot called Madi that offers hair dye suggestions based off of images uploaded by the user. Flawless by Gabrielle Union, a hair-care line that sells exclusively at Ulta, launched a Hair Profiler bot in September that is only text-based, offering hair damage and maintenance tips based on a series of questions, such as “Do you ever use heat on your hair?” and “Is it chemically treated?”

According to Mahi de Silva, the CEO of the chatbot platform Botworx.ai, which developed the bot with Flawless, the lack of a visual component hasn’t been a problem. The brand reported a 400 percent increase in product engagement from users who engaged with the bot, with 50 percent of them sharing their experience and prompting others to try it on social media. But actual conversions are likely much lower. Only 21 percent of users clicked through to the Flawless website to consider a purchase, said Kylie Garcia, Flawless’s digital media manager.

Indeed, many in the industry believe that those visual components are key to a chatbot’s success.

“The ability to send a photo or video to try on, say, a lipstick significantly adds to the engagement,” said Parham Aarabi, the founder and CEO of ModiFace, which has worked with Estée Lauder on its chatbots. His team is focused most on perfecting the AR integration of these chatbots. “The less someone has to type, the better the experience,” he said.

As technology in the chatbot space advances, beauty brands will still have to find the proper home for them, as discovering the bots in the first place can also prove tricky.

While companies like Flawless and Sephora promote their chatbots across their social media channels and with targeted ads, “there’s still a relatively small percentage of users looking to discover chatbots” via Messenger itself, where most are hosted, said Brucculeri. Facebook’s new web plug-in for Messenger, which allows for chatbot conversations to take place on brands’ e-commerce sites, is slated to help solve for that by building more awareness.

Victoria Buchanan, a fashion and beauty researcher at The Future Laboratory, thinks connecting with other platforms like this will be vital going forward: “For chatbots to improve and remain relevant in the consumer conversation, they can’t be a stand-alone medium.”