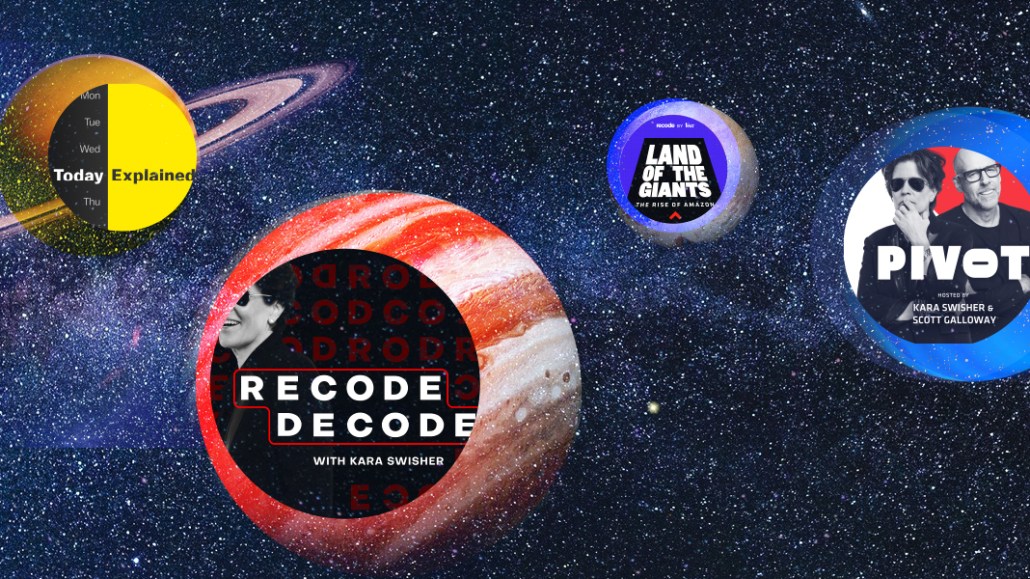 Forget about the pivot to video, Vox Media has pivoted to podcasts (and some video).

Vox Media Podcast Network now generates over $10 million a year in revenue from a roster of more than 200 shows across Vox’s 14 brands, including those produced with partners like Stitcher. While president of Vox Media Studios Marty Moe wouldn’t disclose revenue figures, he said the goal is to double the eight-figure revenue business. This would mean a minimum of $20 million in 2020. In all, Vox Media worked with over 100 different podcast advertisers last year and he said he expects this number to grow this year, although the focus is on expanding hit podcasts.

“Our show count is not going to grow at the same rate as it did over the past 18 months,” said Moe. “We can take bigger swings that are less financially risky because we can achieve a bigger audience” by growing existing podcast franchises like Pivot with Kara Swisher and Scott Galloway and The Ezra Klein Show.

(Moe would not disclose the number of times Vox Media podcasts have been downloaded.)

The perks of having this many shows, Moe said, is that network already has an ingrained audience exposed to its programming, which enables the division to not only drive those listeners to new shows, but allows Vox Media to sell advertising on the shows faster and more easily than it could previously. While each show is priced individually, the shows are also categorized by topic and can be sold in groups.

Following its acquisitions of New York Media and Epic magazine, Moe said his team will be relaunching some of the old New York brand podcasts in the first half of the year, including Good One by Vulture and a new lifestyle podcast by The Cut. He said that the network will also be producing new shows that aren’t connected to any Vox brands, and has been sourcing this content from third-party creators and pitches that come in every day.

Moe said the centralized podcast network has also made dozens of hires in the past year, but in order to accommodate the various types of advertising that are now available for podcasting (branded podcasts, host-read ads and some programmatic) the network focused on specific hiring in those areas, including creating an audio-specific team within the company’s branded content studio, Vox Creative.

Host read ads are the most premium offerings that Moe said the team offers, followed by editorially produced reads. However, over the past two years, branded audio segments have increased in popularity among its advertisers and he said he expects this year to be the first in which the brand studio produces the majority of its served ads.

Jeff Ulster, chief content and technology officer of the Podcast Exchange, said that because there are more than 800,000 podcasts available, discoverability for new podcasts is very challenging, with word of mouth, social media and websites being some of the existing marketing tactics for new shows. However, currently the top way to drive the audience to a new show is by plugging the program on another podcast, he said.

“It’s more difficult to convert one platform to another,” so Ulster said that Vox Media using its 200-plus shows to promote new programming on its network puts its new shows at an advantage for pulling in new listeners. Moe said some of the ways that Vox Media plugs its new shows and new seasons of its existing programming is through internal promotional ads across its shows, mini episode drops within existing shows and live podcast recordings.

The biggest advantage to having invested into growing the network and number of shows, Moe said, is “being able to go to an advertiser and say, ‘If you sponsor this launch, we’re going to be able to give you an audience that you can count on,’” he said. “Monetization is improved right out of the gate.”

This story has been updated to include that Vox Media didn’t disclose hard revenue figures for the business.