The Programmatic problem: What’s an audience without a show? 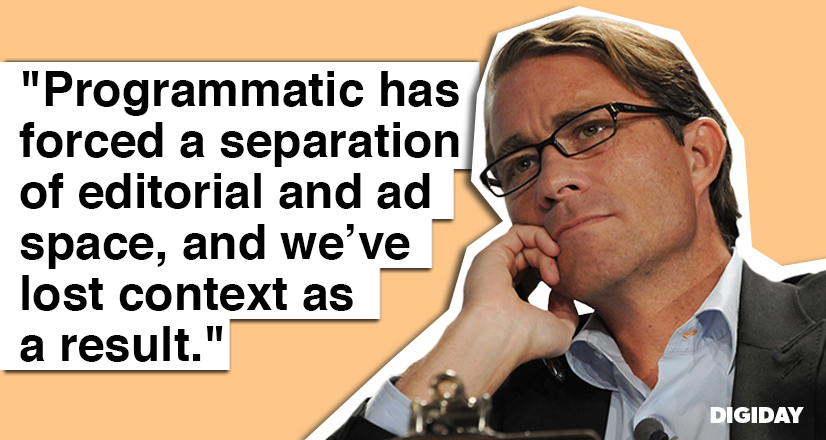 John Battelle is executive chairman of sovrn Holdings, a programmatic advertising and publishing platform. He’s the founder of Federated Media.

Before the rise of programmatic buying and “audience retargeting,” most quality brand media was purchased based on a very particular contextual signal –- even if the market didn’t really call it that. Back then, “context” was code for a publication or television program’s brand, and for the audience that brand attracted. If you wanted to reach moms at home, for example, you’d buy Ladies Home Journal or the soap operas. If you wanted business executives, you’d put Fortune or Forbes on your plan, maybe with a dose of golf or baseball broadcasts.

Fast-forward to today, and programmatic has torn audience away from its contextual roots. Using programmatic tools, a media buyer can identify almost any audience segment they want with pinpoint precision – down to the exact cookie or data segment that matches a customer target. And for various reasons, including price, those audience members are targeted mainly on who they are, independently of what they are doing. Put another way, we buy audiences, but we aren’t buying the show they’re watching – we’re ignoring where that impression is served.

After 20 years of chasing click through rates as a core metric for branded display advertising, we’re finally realizing that CTR is a race to the bottom. The ecosystem optimizes for clicks, and we lose the value of branding in the process.  We’re making a similar mistake with audience buying. Exercised without context as a key signal, it’s a bad habit, one we need to change if we’re going to build brands using programmatic media.

Here’s why. When readers or viewers come to a site or app, they come for the experience – what I call “the show.” That show provides context to the reader – if they’re on a business site, they are there in the context of being a businessperson. If they are watching a home improvement video, they’re in the context of being a homeowner. They don’t know, and they don’t care, that they may also be carrying a cookie that identifies them as a “business executive” or a “stay at home mom.” Our current adtech ecosystem is stripped of most editorial context and driven by retargeting which focuses (for the most part) only on the cookie. So that person watching a video about business may get an ad for diapers if she’s visited a parenting site previously. And that woman watching the home improvement video? If she’s been segmented as an auto intender, she may get an ad from Ford.

This seems upside down.

Wouldn’t it be better if the ads matched the content? Or, at the very least, if the ads about diapers or cars understood the environment in which the ad was being shown, and adapted their creative accordingly (“Ford Trucks: Built for Home Improvement,” or some such).

That’s how it used to be, back when ads were bought and sold in a bespoke fashion by publishers’ ad sales forces competing on the quality of their content and the audience it attracted. And it’s how it could be again, given the wealth of contextual information available to marketers today. It’s not an either/or choice: It should be both. It’s well within the programmatic ecosystem’s reach to surface contextual information. Innovation is happening in the market with terabytes of data that allow readers from a situational as well as categorical basis. Soon we’ll be able to match the creative content with the context of the article –- think about the Ford example above where the ad could be served to the reader who was interested in home improvement — but we aren’t there yet.

Programmatic has forced a separation of editorial and ad space, and we’ve lost context as a result. It’s time to get it back – it’ll be good for quality publishers, good for brand marketers, and great for our industry.