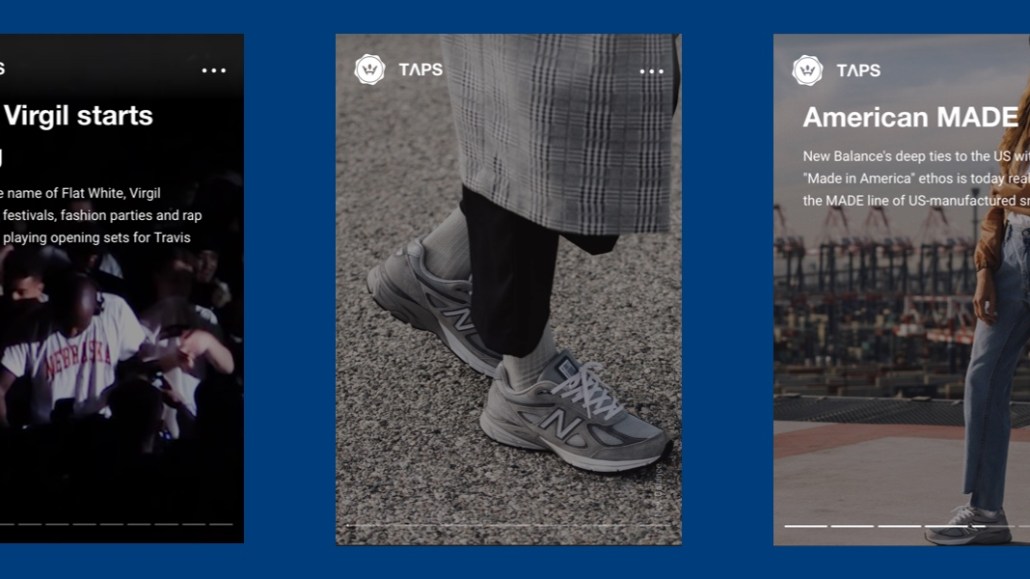 Highsnobiety has rolled out a tiled vertical video feature that looks and works like the stories format popularized by Snapchat and Instagram. Highsnobiety’s mobile site currently features vertical stories about the British music collective House of Pharaohs, the limited-edition New Balance 990 sneaker and a look at a new creative campaign from the hatmaker New Era. The stories combine photos, text and video.

Over the past few weeks, the 10-15 people that work on the vertical multimedia stories regularly have been producing one story per week. (Those people also have other responsibilities.) But as the operation ramps up, the output will increase to once daily, according to Highsnobiety’s managing director, Jeff Carvalho.

The launch of the vertical story format comes as the number of publishers creating branded content in this format continues to ramp up, and as both brands and publishers get increasingly comfortable buying vertical video advertising.

“This is similar to what we do on [Instagram Stories],” Carvalho said. “But I think we take it a step further.”

The House of Pharaohs story is sponsored by Nike; New Era sponsored the video about its campaign; the New Balance story concludes with a link to buy the shoes.

The only video that isn’t sponsored, a kind of primer on Louis Vuitton creative director Virgil Abloh, directs people to subscribe to Highsnobiety Style, a vertical-specific Instagram account that has nearly 228,000 followers.

That early success stems in part from advertiser familiarity with the stories format. Highsnobiety, which earns most of its revenue from branded content, has already found success in turning its Instagram Stories into a canvas for branded content. It publishes a fresh story every day on its main account, which has 2.1 million followers.

That audience size is not too far behind the monthly unique audience; it drew 3.2 million uniques in March, according to comScore.

Highsnobiety is part of a growing list of publishers trying to create a stories-style format on their owned and operated properties. Mashable rolled out a Stories-style format, Mashable Reels, at its 2017 NewFront presentation and was selling sponsored versions of the format just weeks later; Forbes tested a cards-focused product on a Progressive Web App version of its mobile site late last year, before abandoning the effort shortly after Lewis D’Vorkin left Forbes to work on the Los Angeles Times.

Over that same period, the number of publishers offering vertical video advertising has grown substantially.

But Carvalho said he sees little reason to offer that to advertisers. “Opening this up to programmatic advertising feels like something we wouldn’t do,” he said. “We’re an ultrapremium offering. We’re at a size and scale that allows us not to worry about that stuff.”