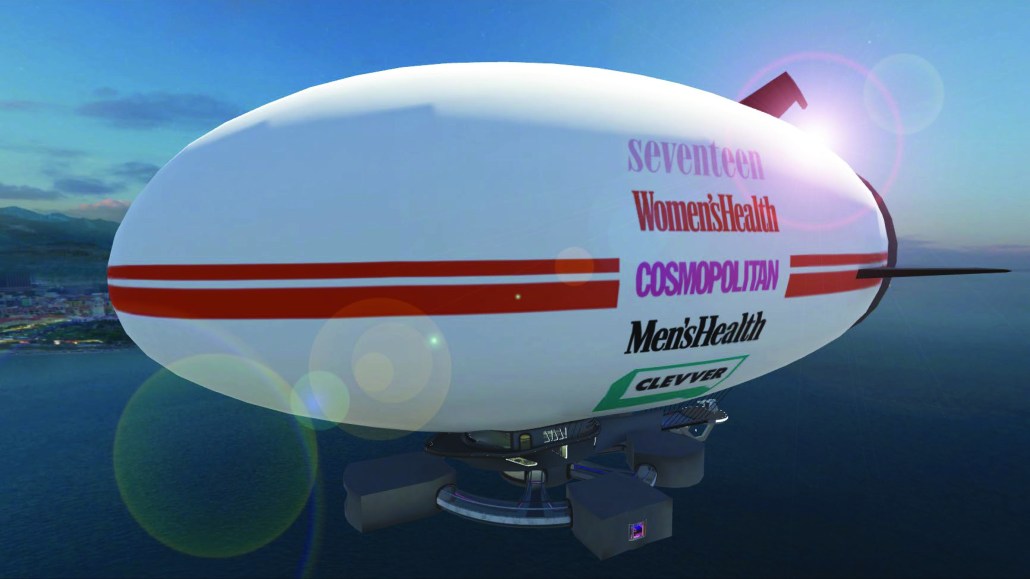 Hearst wants to bring advertisers onto an airship it created in the virtual world of the metaverse.

The idea behind the Hearst Youth + Wellness Group Airship, which will open to new and existing clients starting this fall, is to show the potential in co-branded VR experiences to reach Hearst’s audience of young female gamers. Hearst says its Youth & Wellness Group — which includes Cosmopolitan, Women’s Health, Men’s Health, Seventeen and Clevver — reaches 1 in 3 women who play video games, citing 2020 Comscore data.

This isn’t Hearst’s first foray into the gaming and virtual space. Cosmo partnered on a mobile game in June with Covet Fashion, with monthly fashion challenges on different seasonal trends. Users could buy the designer products featured.

The scope of the Airship initiative is much larger. Hearst plans to use its branded, custom-built metaversal blimp as a virtual meeting hub and event space. So far, only the Youth & Wellness Group’s sales team of 45 people and some editorial teams have met on the Airship.

“We are seeing many more brands in the luxury and fashion space that have started to test out gaming,” said Nancy Berger, svp, publishing director and CRO of the Hearst Youth & Wellness Group. “Advertisers want to conquer new spaces,” she said.

The virtual blimp as a “marketing tool”

While there may be opportunities down the line to invite an audience or influencers onto the Airship, the goal for now is to get clients aboard and show how they can build immersive, custom co-branded experiences in the metaverse. Berger wants clients to play in and explore the space — which features rooms branded with each of the publishing titles in Hearst’s Youth & Wellness Group — and “talk to them about other opportunities that they can build out in other gaming platforms,” Berger said. “The Airship isn’t necessarily an opportunity to engage from a consumer standpoint,” she said. It’s more of a “marketing tool.”

The Airship is also not “necessarily going to be about revenue generation,” Berger said. Hearst would not say how much it cost to develop the Airship. “We believe this space is worth investing in and that there is a real opportunity to further our leadership position in delivering innovative, first-to-market solutions for our advertisers,” Berger said. Hearst will not charge clients to board the Airship and will begin inviting and hosting them on the Airship this fall.

Brands are showing interest in elements of the metaverse, said Dan Holland, svp, product solutions and Dentsu gaming, Americas lead. He called gaming an “excellent test bed” for what he believes is the future of the Internet. This is “especially true” among luxury brands, who can use gaming to reach current and future luxury shoppers with digital products, Holland said. Hearst’s move into the virtual world allows them to engage and reach their audiences with “more immersive experiences,” he said.

Once you don your VR headset and create an avatar (Berger’s has blue hair and eyes), you can teleport onto the Airship. It takes you to a lounge, where you can meet editors from each publication in Hearst’s Youth & Wellness Group. It’s “a place where we could have clients come and meet with our staff,” Berger said. Then you can move around and travel through each magazine’s branded room with distinct custom experiences.

The Women’s Health room, for example, has a hot tub, meditation studio and a virtual hike, where you can interact with other denizens of AltspaceVR, the social virtual reality platform in which the Airship is located. The Cosmopolitan room has a selfie wall, a beauty area, bar games and a cocktail bar where you can (virtually) drink Cosmo-branded wine. Berger said this can show clients the opportunities for product placement in gaming and VR.

The Hearst Youth + Wellness Group Airship is located in Microsoft’s AltspaceVR platform. It was built by Origami Air, a virtual reality production company founded in 2020 with the goal of “homestead[ing] a virtual future.” Hearst’s virtual blimp is the latest to join a fleet of branded airships designed by Origami, which has also built Airships for brands such as Coca-Cola and Nestlé Purina. Users in the Airship can visit these other branded blimps (with permission), in addition to other virtual spaces in AltspaceVR.

VR headsets are not necessary to access the Airship; it’s possible to enter the virtual space through a traditional web browser, according to Origami Air founder and product director Trisha Williams, though “the in-VR headset experience is the best.” Users in full VR are better equipped to experience the elements of AltspaceVR that most closely recreate real-life socialization, including spatial audio and avatars’ realistic gestures.

Still, the most metaversal aspect of the space is readily apparent to users both in-browser and in VR mode: it is “100% persistent,” according to Williams, meaning all changes are visible to all users in real-time. This element is key in making the Hearst Youth + Wellness Group Airship a bona fide virtual space rather than a gussied-up video game level.

“We collaborated with Hearst Magazines to create a welcoming experience for VR users and curious minds who want to dip their toes into the metaverse and see the potential,” Williams said.

Hearst’s use of its Airship for business-to-business purposes signals the company’s understanding of the potential for virtual spaces to be more than games or even immersive brand activations. By treating its Airship as a digital boardroom, Hearst has joined the growing list of companies that are entering the metaverse to spark coworking and collaboration — not as a mere novelty or marketing expense.