5 brands becoming news publishers in their own right 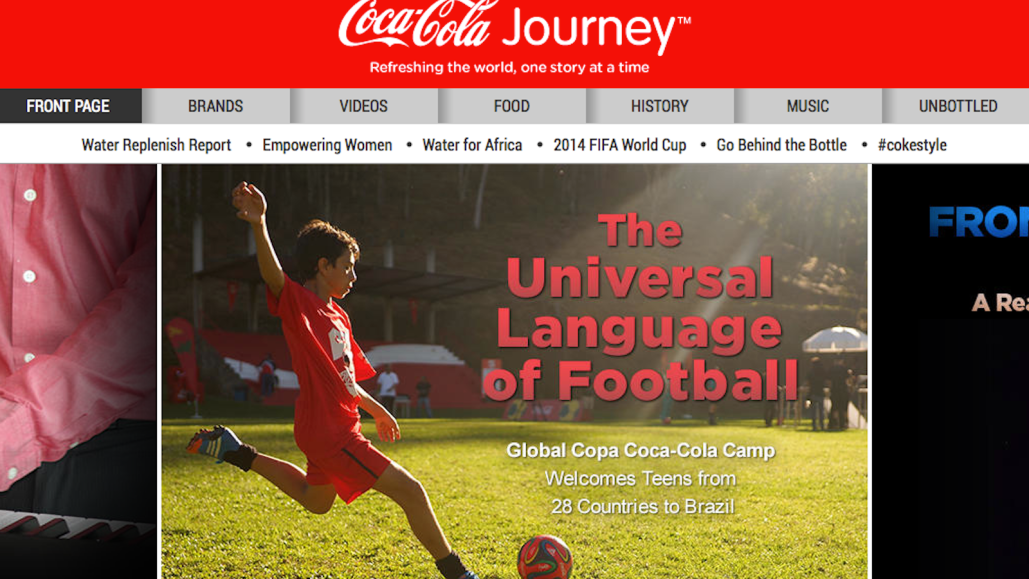 As brands move away from traditional advertising, some are increasingly encroaching on established publishers’ turf by starting their own content sites, complete with editorial staffs and originally produced content. GE is getting into the act with Pressing, which draws from publishers like Vox, CNN and Fox News. Here are five others whose content might surprise you.

Content: A year and a half ago, Coca-Cola turned its homepage into an online magazine called Coca-Cola Journey. The result is still very much a corporate site, but is colorful and photo-driven. The editorial is an upbeat mix of culture and lifestyle content, covering topics ranging from Coke’s do-good projects around the world and the fun times Coke employees have at work. About half the content is unbranded, like this article on tiny houses.
Staff: The site lists 12 staffers who are overseen by managing editor Ashley Callahan, a former TV journalist.
Branding: There’s no subtlety here. The Coke brand is present throughout, from the red graphical cues to sections like “What’s bubbling” to articles on Coca-Cola’s many corporate initiatives.
Impact: The company said it attracts an average of 1.2 million visitors a month to the site and has a (relatively low) bounce rate of 20 to 24 percent. It’s introduced seven other versions of the site for other countries, including Russia, Germany and Japan. 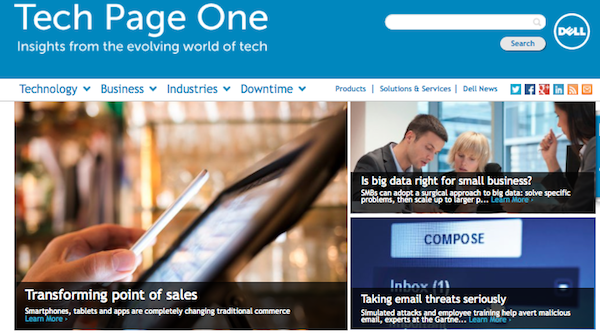 Content: Dell was an early adopter of branded content with its own content channel, Tech Page One. The site carries a mix of original and outside articles from sources like Reuters, Forbes and ReadWrite that are about the intersection of life and tech. Recent original pieces included What online quizzes tell us about consumers and 3-D printing: The future of casts?
Staff: The site is managed by Nicole Smith, whose journalism credits include the L.A. Times, Newsday and Gannett.
Branding: The site carries Dell branding and there’s a tab for Dell corporate news, but most of the site’s content is not connected to Dell.
Impact: The site got a big validation this past February, when it was ratified as a news site by Google News. Tech Page One has 1,300 Twitter followers and 385 members on LinkedIn.

Content: CMO publishes a mix of original editorial content and content from other sources, like The Wall Street Journal, the Boston Globe and Business Insider, geared towards marketing pros.
Sample article: The site reads fairly dry, but even CMO has its version of clickbait, with articles like 15 Mind-Blowing Stats About Modern Marketing.
Staff: Overseeing the content is editor in chief Tim Moran, a former editor-in-chief of EETimes.com.
Branding: The prominent logo on the site makes it clear CMO is an Adobe site, but the goal here is to stay away from product and company stories, Adobe included. Instead, the focus is on associating Adobe with quality thought leadership and insights pieces.
Impact: The site is getting about 100,000 uniques and 200,000 page views per month. About 20,000 subscribe to its newsletter and 35,600 follow CMO_com on Twitter. CMO also gets exposure by providing content to the WSJ’s CMO Today page, which Adobe sponsors; and Fox Business News. The site also gets a boost as the home of Adobe Digital Index, which is often quoted by the business press. 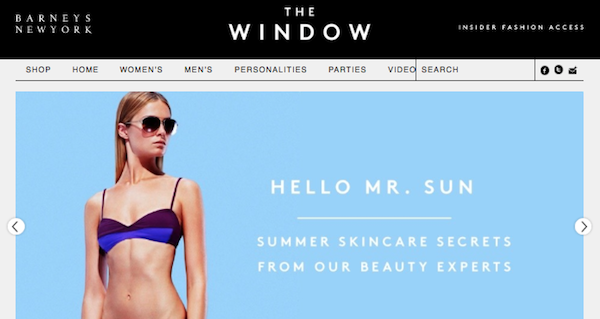 Content: The idea is to combine luxury fashion and technology by pushing new designers and stories while giving people a personalized experience. You can book a shopping appointment, for example. Recent content has included interviews with Rose Byrne and Elisabeth Moss.
Staff: Marissa Rosenblum, formerly of Refinery29, oversees Barneys’ editorial site as its first editorial director.
Branding: Barneys is front and center on the homepage and woven throughout the content.
Impact: Barneys has close to 1 million Facebook followers and 336,000 Twitter followers.

Content: Xerox launched the content site in November as part of a larger effort to get people to think about the company as more than just printers and copiers by publishing content about its other lines of business, like public transportation and health care.
Staff: Ken Ericson, director of global social marketing at Xerox and a former AP journalist, leads an internal staff and freelancers, aided by Group SJR. The site puts out one original story a day as well as third-party content via NewsCred from publishers like Forbes or Business 2 Community.
Branding: About 40 percent of the stories mention Xerox or talk about topics related to Xerox’s business lines.
Impact: @realbusiness has 1,200 followers on Twitter. Content is also amplified on Business Insider. Real Business suffers from an over-reliance on stock photo art, but it’s had some recent popular stories, including ones on the future of toll booths and the future of tech.