At the Digiday Programmatic Media Summit in November, we sat down with 78 industry leaders from across the country and discussed hot topics in the industry. Check out our earlier research on the state of the agency world here. You can also learn more about our upcoming events here.

Publishers want to ditch vendors
Publishers are beholden to vendors they struggle to work with. The Washington Post’s Jarrod Dicker was blunt in his assessment of publishers’ use of vendors during a Digiday Slack town hall in May. “While it’s necessary to leverage outside tech, it’s actually insane how much dependence publishers had on third-party ad tech to drive their revenue. They forfeit too much control.”

Frustrated with the publishing limitations imposed by its previous tech vendors, the Post developed Arc, a content management system for publishers. Arc has become so successful that it’s being used as a white-label solution for major publishers, including Tronc’s Los Angeles Times. 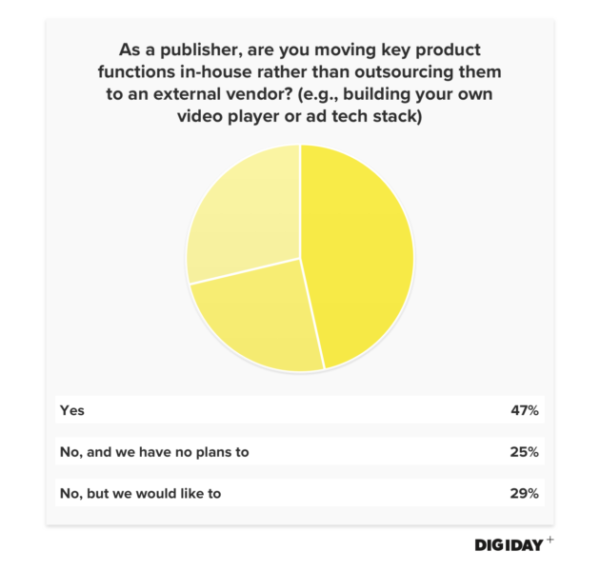 Other publishers are also investing in internal tech. Forty-seven percent of publisher respondents said they were building internal solutions rather than relying on outside vendors.

Beyond the Post, BuzzFeed developed Swarm, a native ad format that lets advertisers place ads across all of BuzzFeed’s social channels. Vice quintupled its engineering team, giving it the bandwidth to develop its own CMS and video players as well as reduce page-load times.

Development costs tie publishers to vendors
Building internal tech is costly both in terms of dollars and development hours. As the industry consolidates and publishers continue to shed staff, only established legacy publishers or media companies with strong financial backing will be able to afford to bring products in-house. Purch, BuzzFeed and Vice received combined funding exceeding $2 billion, according to Crunchbase. When building internal technology, the only thing more prohibitive for publishers than funding is their ability to hire and retain people capable of developing it. Regardless of industry, human-capital constraints are the greatest challenge businesses face, according to CEOs surveyed by The Conference Board. 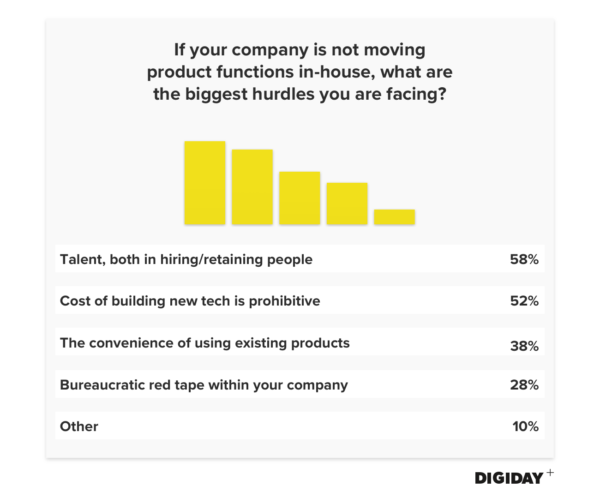 While cost and talent were tangible challenges to bringing product functions in-house, convenience of existing platforms was also a major factor for some. Publishers could develop their own tech, but say it’s sometimes beneficial to have someone to pass the blame to when problems arise. As one anonymous publisher head of product put it: “Sometimes I need a neck to throttle when something breaks.”

Tech requires a significant amount of time, money and energy to develop. Often, non-media companies that are willing to dedicate more of their resources to developing products can produce more sophisticated ones at a quicker pace than publishers. Even if a publisher brings product functions in-house, the rate of change within the digital media landscape means that projects could become obsolete before their completion.

PMPs near total adoption by digital publishers
Fear of missing out is alive and well in the digital media industry. Everyone in the industry wants to be a part of PMPs, with 97 percent of executives polled saying their company plans to increase sales via PMPs in the coming year. 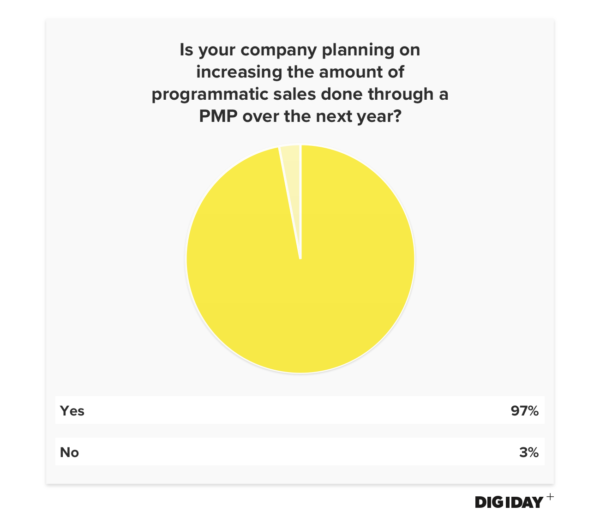 Programmatic spending is growing at an incredible clip, accounting for $32.6 billion in U.S. digital ad spend for 2017, according to recent eMarketer projections. Despite the growth, programmatic is fraught with inefficiencies, lack of transparency, dubious ad quality and fraud. These issues have major repercussions. Publishers reported wasting up to 20 percent of their programmatic video impressions on uncompleted transactions alone.

Publishers are hopeful that PMPs can address these concerns. By setting up a PMP for a preapproved list of buyers, publishers protect themselves and their users from poor-quality intrusive ads from unsavory brands. Furthermore, publishers gain deeper bid-level transparency through PMPs that’s otherwise lost in black-box exchanges. “We encourage PMPs and programmatic guarantees because of domain spoofing and fraudulent impressions,” one publisher said.

At the Digiday Programmatic Marketing Summit in the summer and the Programmatic Media Summit in November, we asked publishers how much of their programmatic revenue came from PMPs. A similar percentage of publishers at both events reported that PMPs were responsible for less than half of their inventory. However, publishers that used PMPs for more than 75 percent of their revenue spiked by at least 250 percent. 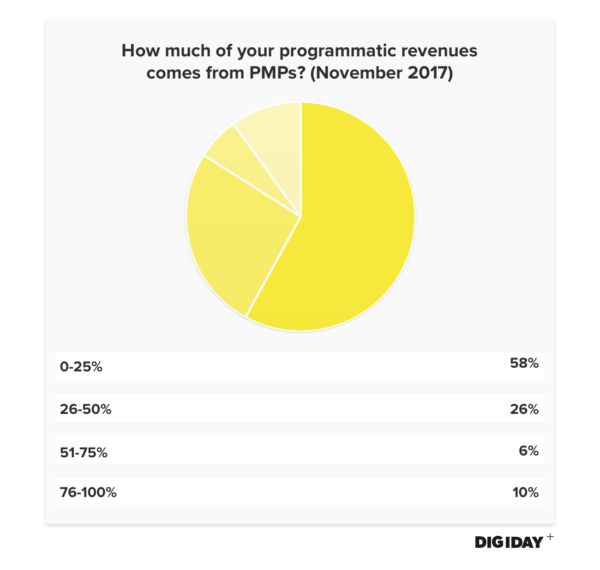 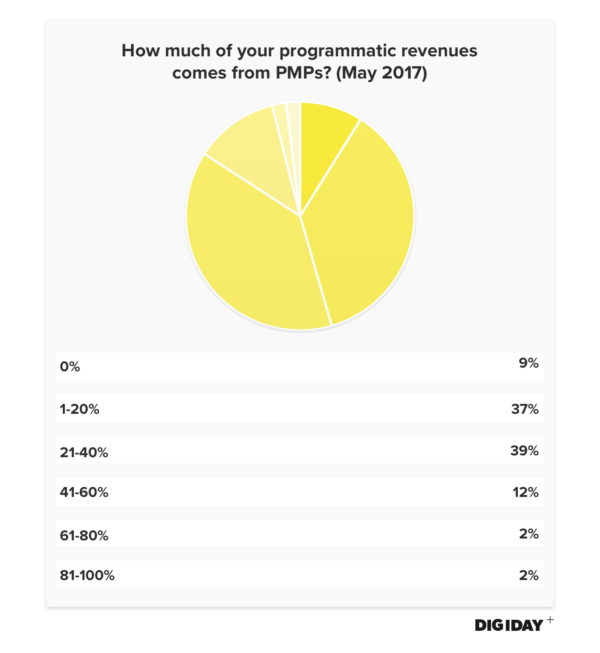 Programmatic private marketplace deals are not without their issues, though. Lack of biddable inventory remains a constant irritant for buyers. Buyers that overlay specific audience-targeting data struggle to find reachable consumers as well. “PMPs don’t scale because clients are very focused on audience targeting and specific [geographies],” said one anonymous exec. “We try to be transparent with buyers and tell them that they need to be more flexible with their targeting.” Another publisher agreed: “Scalability is the biggest challenge. We set up deals but never transact.” To address that, major publishers are pooling their premium inventory. Condé Nast, Vox Media and NBCUniversal created a PMP together that lets buyers access their combined 200 million viewers.

Server-to-server connections are all about speed 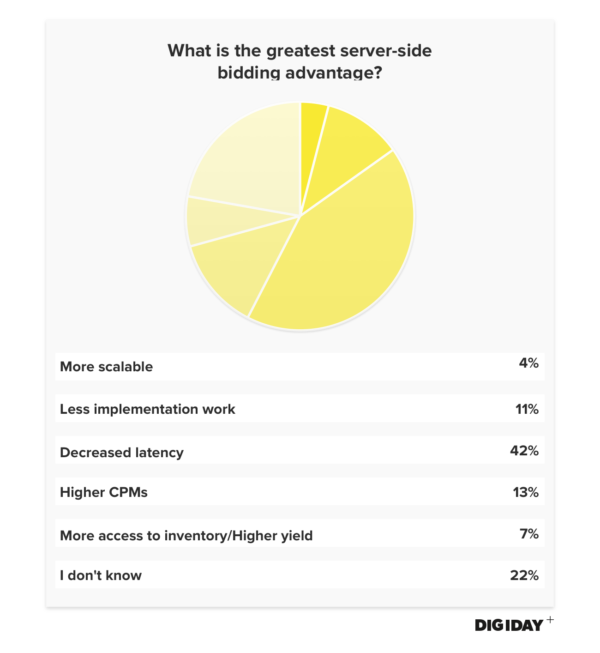 Website visitors have notoriously short attention spans. Research from analytics firm Kissmetrics found that 47 percent of online users expect a page to load in under two seconds and will leave a website if it takes longer than three seconds to load. Publishers are thus incentivized to make sure their website loads quickly — for the sake of user experience, and more importantly, for ads to load. Enter server-to-server bidding with its speed.

In traditional header bidding, the exchange occurs within a publisher’s website as the page loads. Although a publisher with more supply-side platforms may bring in higher revenues, its pages will load slower than those of publishers with less SSPs. Each SSP conducts hundreds, if not thousands, of bid calls per impression that challenge a publisher’s server capacity.

Server-to-server bidding negates the latency issue because the bidding process is moved off the publisher’s site to a vendor. Instead of multiple ad calls transferring through a publisher’s page, only one call is made to the server side. Drew Bradstock, the svp of product for Index Exchange, claims that server-side bidding will enable publishers to “get down to sub-200-millisecond timeouts.”

About three-quarters of publishers use server-side connections 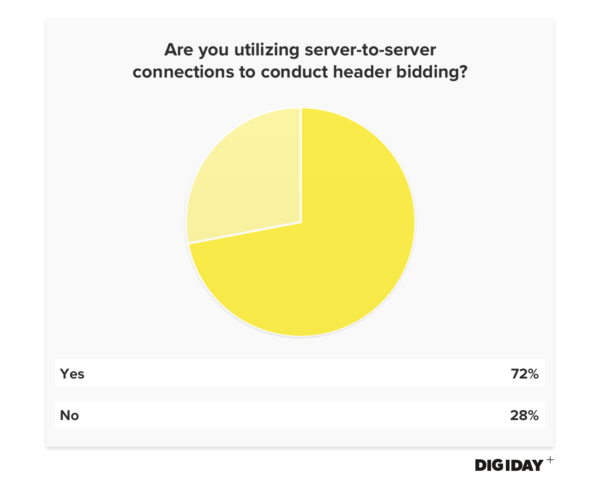 Media.net won the business of The Atlantic and Forbes to run their server-side bidding. Elsewhere, Amazon, Google, Rubicon Project, OpenX and AppNexus and Index Exchange have built their own server-side bidding products. Amazon counts Bauer Xcel Media and Meredith as clients of its server-to-server solution, which resulted in 20 percent revenue increases for both publishers. Internationally, Prisa shifted to a server-to-server strategy across nine countries by utilizing Switch Concepts’ technology. Other major publishers such as the Financial Times and the BBC are header-bidding holdouts.

Publishers refrain from using server-to-server bidding for varied reasons
The reasons for why publishers shy away from server-to-server connections vary, but issues concerning audience matching and additional platform integrations were most common among respondents. 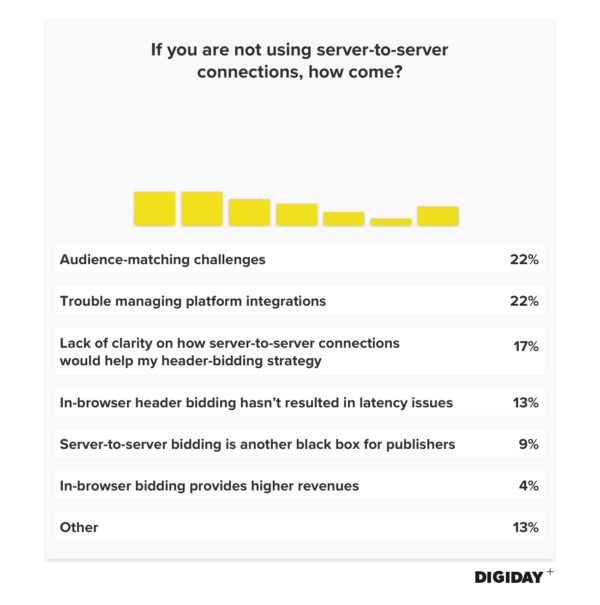 When header bidding is transferred off of a publisher’s browser, the SSP loses the ability to keep the cookies synced to the user, often leading to poor cookie match rates between the SSP and publisher. This challenges DSPs and advertisers trying to determine the identity and value of the end user. As Ben Kneen, director of monetization at AppNexus, wrote on his site Ad Ops Insider: “An unsynced [user] is the same as a cookie-less user, and often worthless to an exchange. There’s no data attached to the user, so bidders can’t value it at much more than a blind prospect, which isn’t worth much. Unsynced users are likely to get extremely low bids or no bid at all, so the impact is significant.”

Although publishers might not have to worry as much about latency issues after moving to server-to-server connections, the shift doesn’t alleviate all technical problems for publishers. The obvious is the cookie drop-off between the publishers and the SSP. Additionally, SSPs aren’t always thrilled about taking on the task of hosting header-bidding auctions. Beyond the added infrastructure cost of managing increased demand sources, SSPs are forced to integrate with one another via wrappers. As Nat Poulter, then the head of programmatic at MailOnline, said: “There is very little collaboration or cooperation in ad tech right now, and as such, everything is grinding to a halt.” Publishers trying to ensure that enough SSPs are plugged in will invariably be left reaching for painkillers.

George Levin, CEO of Getintent, noted that publishers risk losing transparency of the bidding process in server-to-server bidding. That’s failed to deter publishers accustomed to having no idea what’s happening with their impressions. Only 9 percent said moving to a black-box scenario was holding them back from switching to server-to-server bidding. 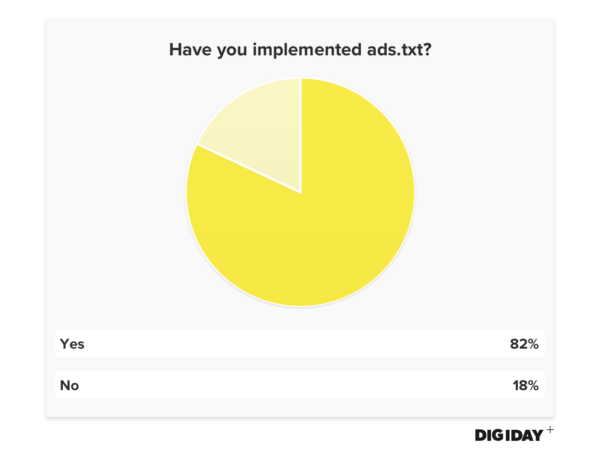 Publishers, both in the U.S. and abroad, were originally slow to adopt ads.txt. Tech teams facing an overburdened workload lacked the bandwidth to implement ads.txt files. Now, thanks to Google and other major DSPs filtering inventory using ads.txt, the initiative has taken off. Over 80 percent of respondents said their companies have implemented ads.txt.