Digiday Research: The state of the agency world

At the Digiday Agency Summit in October, we sat down with hundreds of industry leaders from across the country and drilled down into the hot topics in the industry. We asked their feedback on key issues such as transparency, Amazon, consulting firms and more. Check out our earlier research on the pivot to video here. You can also learn more about our upcoming events here.

Fears about hiring and retaining talent stand out
Agencies today face no shortage of problems. With clients, new technologies and competitors, among many other issues, agencies find themselves besieged on all sides. That said, they won’t be thrilled to hear that their greatest challenge comes from within.

When asked about the greatest challenge agencies face, 23 percent of people identified hiring and retaining top talent. Agencies have long been known as a revolving door for employees, with average annual turnover thought to be 30 percent. This isn’t new, though. Digiday and many others have previously reported on this.

With consulting firms making inroads to the agency world, talent wars are heating up. PwC’s agency business had 14,000 employees as of March, while IBM’s Interactive Experience counts 3,900 employees. If anything, talent concerns will likely worsen before they improve.

Executives are leaving the agency world, with some refusing opportunities to return. For those interested in escaping the breakneck pace of New York City or Los Angeles, smaller cities such as Wilmington, Delaware, and Rochester, New York, are alternatives and offer advantages in work-life balance.

One way agencies are starting to fill the talent gap and improve gender diversity is by hiring mothers returning to the workforce. Ultimately, these “returnships” represent a minute gain in filling agencies’ hiring needs, but they indicate how those needs are slowly challenging well-entrenched norms.

Second to talent was brands moving marketing in-house, which 18 percent of respondents indicated as agencies’ greatest concern. Fifty percent of brands now conduct more than 60 percent of their marketing efforts in-house, according to Digiday’s earlier research from the Digiday Brand Summit in April. 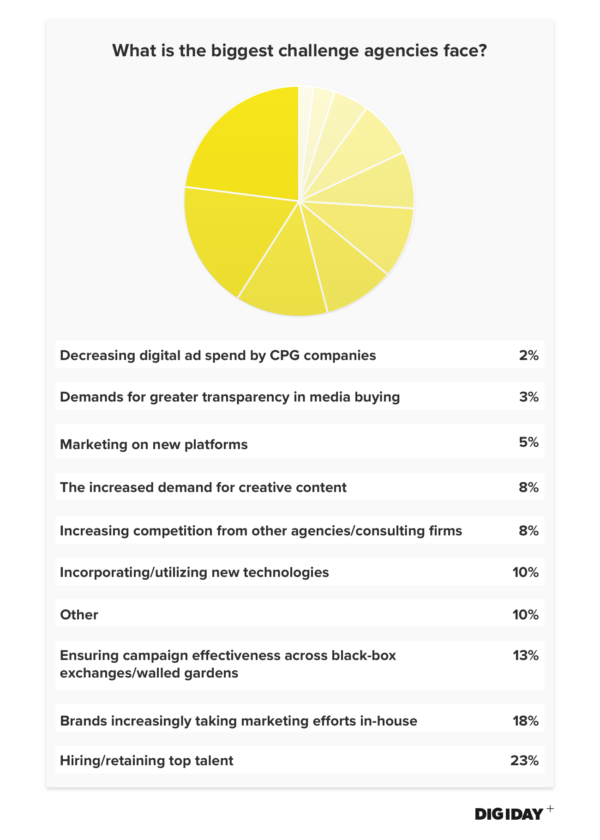 It’s not difficult to find stories of brands tossing agencies aside. Although this has been a trend for years, the recent departures of leading agency marketers for brands could have stoked these fears. In fact, 40 percent of senior-level marketers now come from agencies, according to research from Grace Blue, up from 25 percent a few years ago. The influx of talent from notable agencies exacerbates concerns about brands’ abilities to bring marketing in-house.

Fears about consultants are overhyped
The ventures of consultants into the advertising world have dominated news conversations, with Deloitte, Accenture, PwC and IBM just a few of the top firms snapping up agencies. Each of those four firms already have billion-dollar agency businesses.

If you only read news headlines, you might believe consulting firms have already ushered in an agency apocalypse. One attendee at the Digiday Agency Summit lamented, “We don’t even go head-to-head with consultancies in pitches. They just add in the agency services for free.” Another anonymous executive added to the concern, saying, “The issue is that consultancies can layer everything on each other. They say, ‘We’ll activate media for free.’ And my red flag goes up. We’ve been more than commoditized.”

Comments like these surely win headlines, but our research shows they are in the minority. Only 4 percent of agency executives described themselves as “extremely concerned” about increased competition from consultancies. Instead, agencies seem relatively indifferent about the changing competitive landscape. Forty-five percent said they were “neutral” on the issue. As one respondent put it: “We’re dealing with agency personnel who’ve gone over there. If, over time, if clients realize that consultancies and agencies are the same because they’re staffed by the same people with similar ideas, we’ll be OK.” 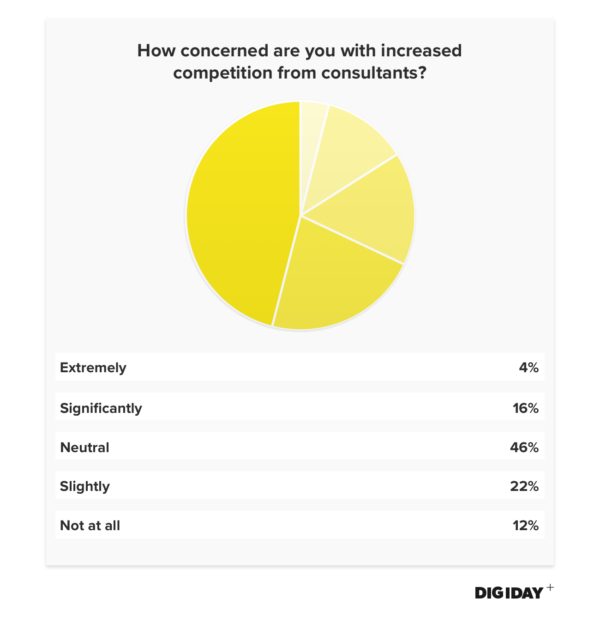 Agencies aren’t worried about Amazon or disappearing digital budgets
WPP CEO Martin Sorrell referred to Amazon as advertising’s “elephant in the room.” Many expect Amazon, which now has a $1 billion ad business, to eventually rival the Facebook-Google duopoly.

Agency leaders appear to be split on Amazon, with 38 percent having slight or no concern about it and 35 percent being significantly or extremely worried about it. Only one respondent identified Amazon as the marketing platform they were most concerned about. Rather than being viewed as a universal threat, Amazon is likely perceived as another major channel agencies have to account for in media strategies. 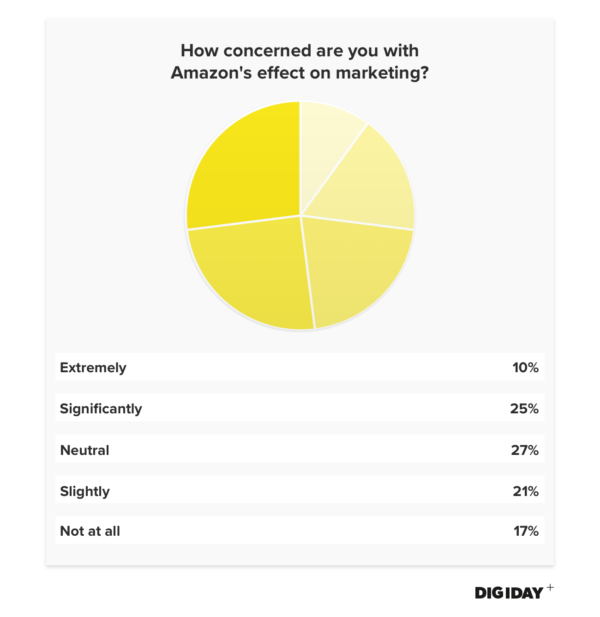 Losing major accounts obviously has devastating affects on agencies. Agencies cautiously watched as ad tech company Audience Science collapsed and laid off all 200 of its employees following the loss of its P&G account. This instantly sparked fears that other brands would follow P&G’s lead. WPP also pinned the blame for its slowed growth on consumer goods companies cutting back their digital marketing spend. 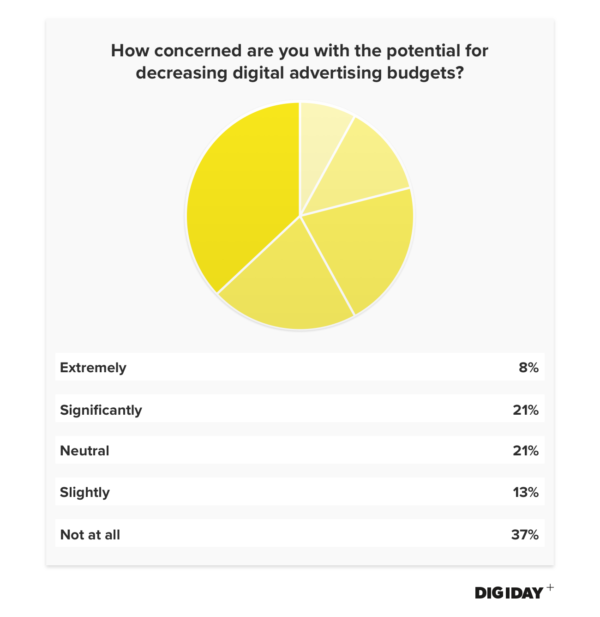 Worries remain about transparency and campaign performance
With ad revenue wasted on fraudulent traffic set to increase to $16 billion in 2017, according to a study commissioned by WPP, many agencies have woken up to brands’ calls for increased transparency in media buying. The complicated flow of ad dollars to publishers coupled with recent increases in programmatic video ad fraud have heightened concerns about transparency. Meanwhile, backlash from consumers over ad placements has forced many brands, including JPMorgan Chase, to take matters into their own hands and reduce the number of approved sites they advertise on.

Over 40 percent of people said they were significantly worried about transparency in media buying, while a further 13 percent said they were extremely concerned. One person singled out Facebook for having “no transparency.” Echoing P&G’s CMO Marc Pritchard’s calls for increased measurement standards, another respondent asked of Facebook and Google, “Can we finally get some third-party attribution monitoring ’round here?”

Improving media transparency will be an arduous issue for agencies to undertake. As one agency executive put it: “We can all be as transparent as you need to be, but it adds hours. I can spend all day in DoubleVerify. But it’s probably not where some of our time is best spent. There are trade-offs that come from process transparency.” We expect the rate of concern about transparency in media buying at agencies to rise as education among brands improves.

Reliably ensuring campaign performance was another enormous worry among agencies. Facebook was consistently cited as the platform executives were most concerned about. Furthermore, Facebook’s inconsistent measurement has done little to alleviate issues. One respondent bemoaned “trying to track and give credit in a walled garden.” Agencies live and die on the promises of campaign performance, so expect more unified industry pressure for independent verification of walled-garden platforms. 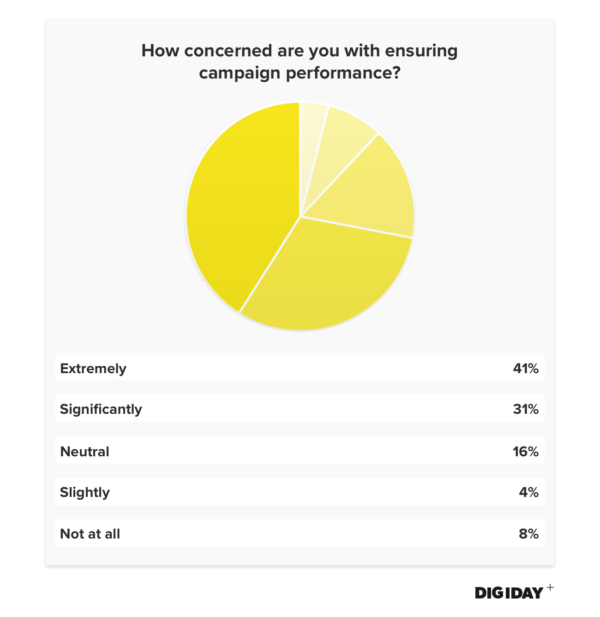 While digital ad budgets may not be going anywhere yet, concerns about campaign performance could plausibly force that first domino to fall. With marketers unable to guarantee performance, brands may feel obligated to spend digital ad spend through other channels such as OTT networks or experiential marketing. 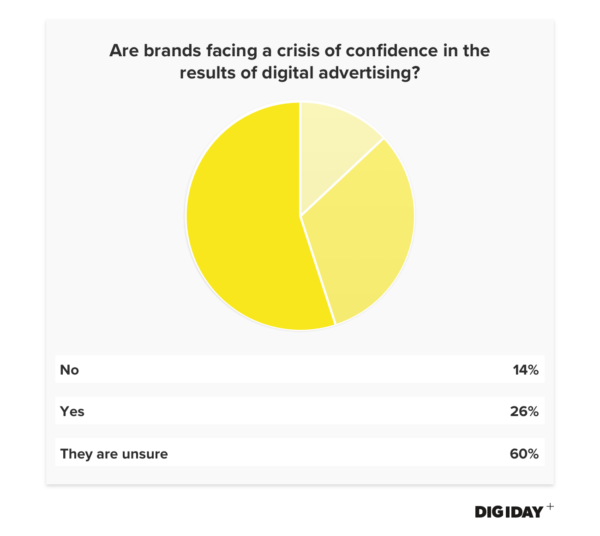 One agency highlighted agencies’ prevailing fear of brands’ lack of confidence in digital marketing, asking, “Are we just one multimillion-dollar fraud story in the headlines away from our clients running to the hills?” One respondent said that while her brands were unsure about digital marketing, she was confident in it. She then raised the issue of “digital’s increased ‘importance’ but lack of actual impact” in marketing campaigns. If this lack of confidence worsens, then agencies — especially digital ones — could suffer.

On the issue of campaign performance, slow improvement in viewability rates have hindered marketers’ ability to provide clients tangible results to validate ad spend. Separate reports by comScore and Admetrics put U.S. desktop display viewability in the third quarter of 2017 under 58 percent, with programmatic video particularly struggling. Video advertising, which has grown sharply with the proliferation of mobile video, is particularly susceptible to ad fraud. Brands seeing viewability rates’ tepid improvement and growing ad fraud will only further question the futility of digital advertising.

Brand-safety concerns are felt but haven’t yet reached critical mass
Most notable from was our survey was how quickly clients’ fears about brand safety translated into action. Although most of the resulting changes haven’t significantly affected media strategies, 89 percent of agencies admitted that they’ve altered a media plan in response to brand-safety concerns.

Google was publicly thrashed earlier this year over ad placements across YouTube videos. Brands like Warby Parker and Allstate were called out when readers found ads for them on Breitbart. In response, brands and agencies were quick to deploy blacklists to guarantee their ads only appeared on approved sites. Unfortunately, the lists are often ineffective due to a host of reasons. 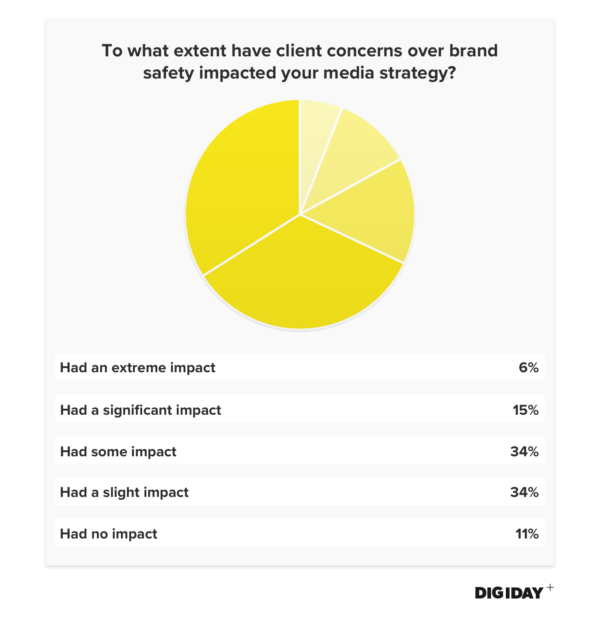 Since the initial flood of brands pulling ads from Google and YouTube, many advertisers have returned to YouTube. YouTube released automated tools to help flag inappropriate content. These solutions are a far cry from perfect fixes. Brands and agencies might have to accept that guaranteeing 100 percent brand safety isn’t feasible. Whether this becomes a permanent issue for agencies or something media planners learn to account for has yet to be seen.

Agencies are divided on who is responsible for ensuring brand safety
Digiday’s research found agency leaders are essentially split into two even camps over ownership of brand safety. Seventy-eight percent of brand marketers thought having advertisements placed next to inappropriate or extremist content will damage their brand reputation, according to a Marketing Week report. The report also found that 67 percent of brand marketers think agencies are responsible for ensuring brand safety. 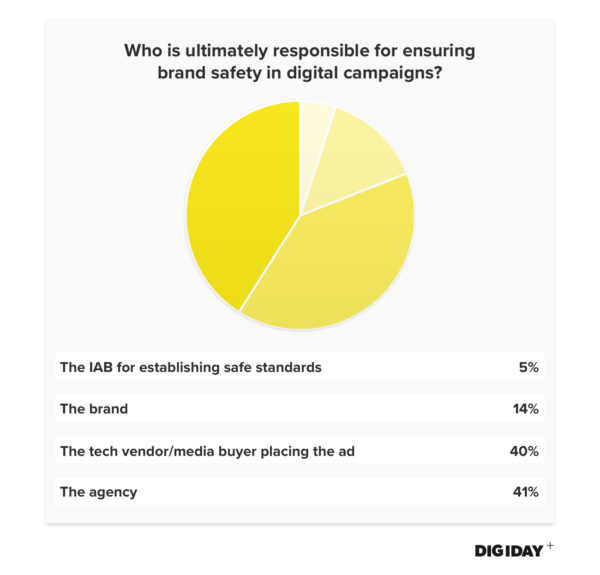 Despite a large portion of agency executives accepting responsibility for their clients’ brand safety, few agencies have offered unique solutions outside of partnering with existing ad verification companies.

One potential course of action for agencies is to allocate media spend exclusively through private marketplaces. PMPs would be able to improve transparency between inventory buyers and sellers because all partners are listed. Despite PMPs’ growth, they are still labor-intensive to set up and the high cost of CPMs in PMPs may not be attractive to agencies or their brands.

If agencies fail to take action, publishers and other vendors might tackle the issue of brand safety first. Grapeshot, a contextual marketing platform, worked with Vice to use keywords to create content categories that advertisers might want to avoid. 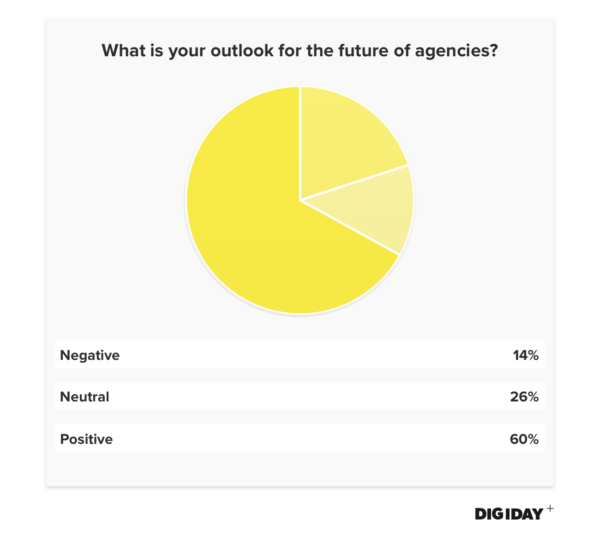 Depending on the agency you work for, that future might not look so rosy. In August, Sorrell cast a shadow on the industry when he announced WPP’s meager growth rates, noting that the company wasn’t projected to see any improvement in 2018. Following his announcement, WPP’s stock sank 12 points, dragging many holding companies down with it.

WPP’s struggles prompted questions about what type of agency will succeed in the future. Digiday asked if the agency-of-record model would be the most dominant model going forward or if brands would instead look to specialized shops to fill their marketing needs. Sixty percent of respondents believe that brands would prefer specialty agencies to the AOR model.

Brands’ preference for speciality shops is already influencing the agency world. The AOR model might not be in the grave yet, but it’s forcing agencies to adjust. Disruption in the agency world looks more likely to come from brands’ needs than from consultants. 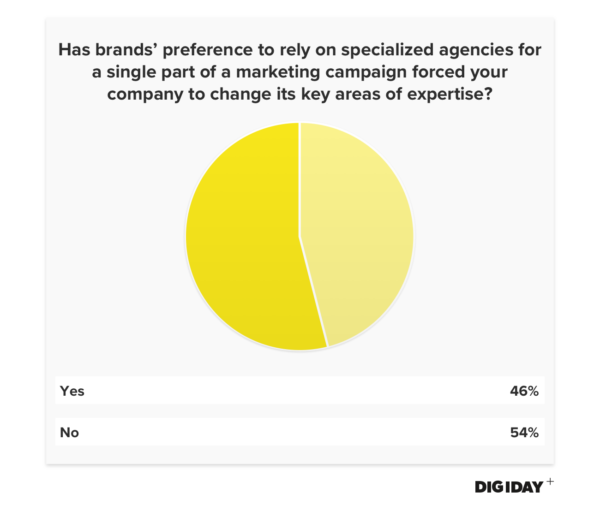