Audi wants to turn its AR app into a personal showroom 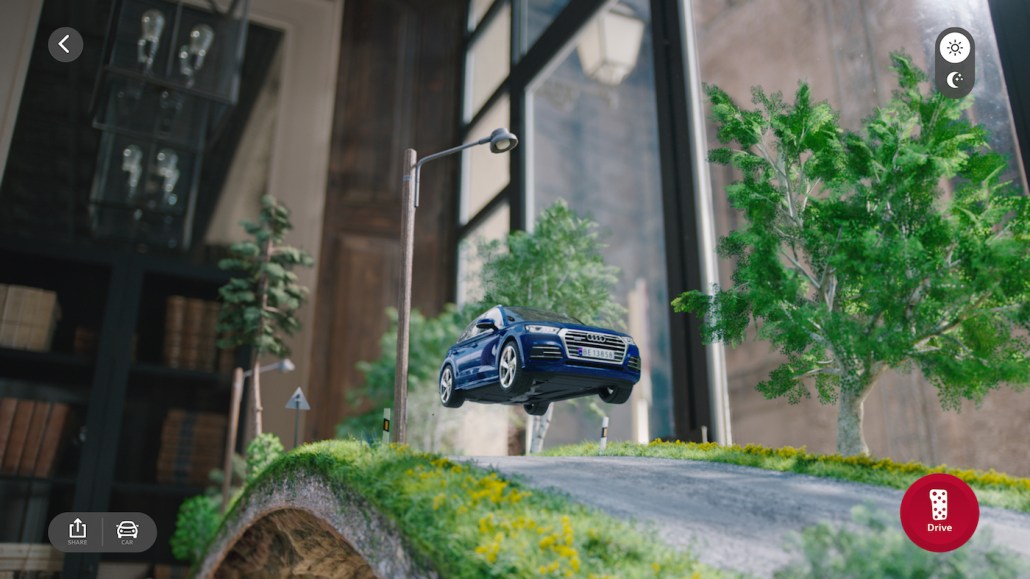 With its new augmented reality app, Audi wants to bring the car showroom to people’s phones.

The app, which was introduced in key markets excluding the U.S. at the start of February, lets users view one of four Audi Quattro models on their device, in miniature form or actual size, making the cars appear in their own living room or anywhere else. The same AR feature lets people create a personalized test track so they can test drive the Quattro cars from the app.

For now, the app is more about driving awareness than providing a service, so it won’t be measured by how many downloads it gets, said Øyvind Rognlien Skovli, communications director at Audi Norway. A TV campaign in Norway that’s tied to the app is designed to look like the car is bursting out of the TV and onto the person’s device. Plans are underway to take the TV ad to other markets.

Eventually, Audi wants people to use the app to view and test-drive other models besides the Quattro, such as prototypes. It also sees giving people the ability to design and book test-drives through the app. Audi also imagines the app changing how Audi sells cars in the future, said Skovli, who believes AR on its owned platform will play second fiddle to whatever it decides to do on Facebook’s and Snapchat’s platforms.

Audi’s decision to build its own AR platform points to the question many marketers are asking themselves, said Adrian Leu, CEO of technology agency Inition. Building and maintaining an app is a massive undertaking in an immature market like AR where development costs are high, but gives the developer more control.

“If you want to build an AR project that provides a service and leaves you in control of not only the experience but the customer data, then it makes more sense to develop your own,” Leu said. “Neither Facebook nor Snapchat give advertisers that flexibility within their closed ecosystems.”

Not every carmaker believes an app is the right route to AR. BMW recently ran augmented reality ads on Snapchat as part of a push to recruit younger fans. At the time, Jörg Poggenpohl, BMW’s head of digital marketing, told Digiday that platforms like Snapchat and Apple’s ARKit were key to making AR mainstream on mobile devices.

Audi has been playing around with AR since 2013, when it launched its first AR-enabled ads with Blippar, though, and believes the cost of the new app will be justified if it can actually mimic the showroom experience.

“We’re looking at this app as if it could be the start of the customer journey in many respects,” Skovli said. “What comes next is hard to say, but it’s easy to see how we could use the app to launch new models and keep people updated on what’s coming to the market.”