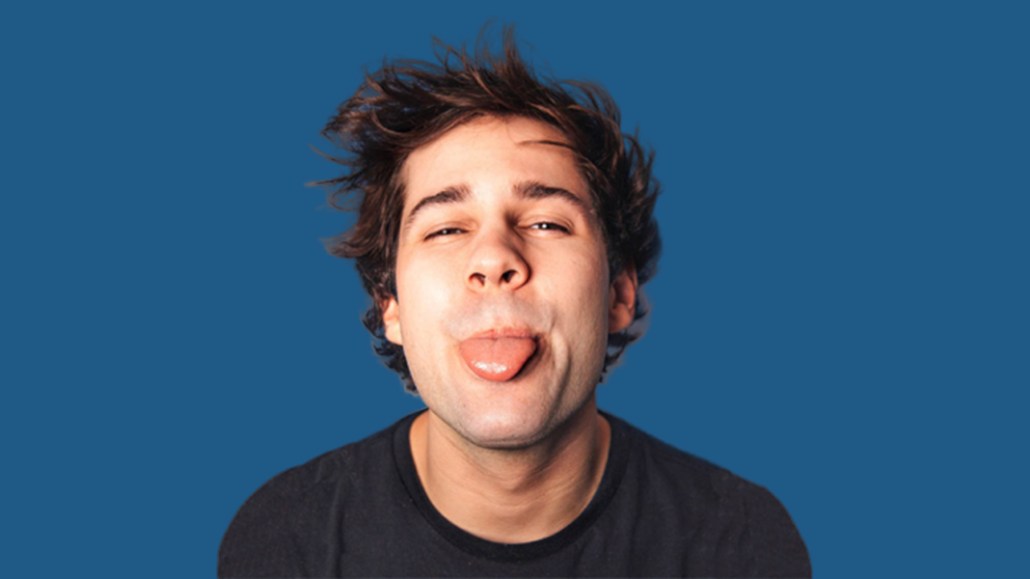 David Dobrik, a 23-year-old YouTuber with 15.9 million subscribers, changed the way SeatGeek works with influencers by convincing the company to be a character in his videos. Since then, Dobrik has been able to use that content to get other brands, like EA Games, to do the same thing. Dobrik explains how he’s branching out from YouTube and if he’d get married again for a prank.

This interview has been edited and condensed for clarity.

You have a unique set up with brands, particularly SeatGeek. How’d you convince them to let you do what you want instead of doing what they want?
I explained that the way to do it would be to have it where every time I did something with [SeatGeek] the end of the promo would be where someone gets something or receives something. Something happens where the viewer associates the brand deal with something positive rather than it being a waste of time. Now, when people see a SeatGeek promo, they’re like, “Oh, something cool is coming” rather than, “Ugh, another ad that will waste my time.” All it took was trying one video.

Is that what you use in your pitch to other advertisers?
100%. Every time I do anything with brands I always use SeatGeek as my example. On my main channel I’ll never do an ad unless it pertains to the video.

How does being a character in your videos help a brand?
People aren’t necessarily like, “I love SeatGeek for the tickets” but they love SeatGeek because they’re supporting creators. If they’re getting behind their favorite creator, then they’re going to want to support them too.

You’ve given away a lot of cars in your videos.
Every time I give away a car I’m like, “This is my last car. I don’t want to be known as this car guy.” At the same time, something new always comes up where someone needs a car or could use one. We’ve been doing a lot of other things lately. I’ve been really into the idea of giving people money for [college] tuition. I posted a video where we gave $25,000 to a DACA [or Deferred Action for Childhood Arrivals] recipient. That was really cool. It’s close to a cause of mine. I’m always so on the fence about getting into politics but I felt like that was the safest and most effective way to talk about DACA where it’s still entertaining and it wasn’t forcing an idea down people’s throats.

Do you think your approach works, if it does, because younger audiences don’t want to watch the typical “sponsored by” content?
Yeah. You really tune out for the 30 seconds an ad is on. You hear what the ad is about and who cares about the other bullshit messaging.

That’s the worst about advertisers, when they don’t understand [how to work with us.] You’re giving it to a YouTuber because YouTubers are personalities and they know their channels best. Don’t give them a script. Give them a couple of things they should hit but really let them make it their own because [if you give them a script] it’s not going to ever be as good as that person making it their own.

A few years ago, YouTube changed its algorithm to be more brand safe and that decreased what you were making on the platform. Do you think about changing your content to make more money on YouTube?
No! Never! That’s not even me being like, “This is my content, I’d never change for corporations.” That’s not even me being lame and talking like some dumb artistic idiot. The reason people watch my videos is because they’re exactly what I make them. If I’m going to take out certain things to match an agenda or match a rubric of things, they won’t be my videos and in the end that’s going to hurt me a lot more than it’s going to help me.

Do you think about what you’re going to do if YouTube isn’t working for you anymore?
I don’t really know if the future is being on NBC or YouTube or being on Netflix. I think it’s all so up in the air. I am trying to branch out and do new things and create stuff that will live on platforms other than YouTube. But who knows where the main audience will be in even a year. TikTok came out of nowhere and in six months became the biggest thing kids watch. It is the brand new Nickelodeon. The kids that are on it are straight up Nickelodeon stars and you can’t argue about it. That’s where all the eyes are. It’d be crazy for me to be like, “I’m gonna get a show on TBS and screw my YouTube channel.”

You’re now a judge for a reality competition show, “America’s Most Musical Family.” Is that part of your plan to branch out?
One of the reasons I did that was that I want to get to a place where I can have mainstream celebrities on my channel. It’s difficult for people to trust YouTubers without them having a bit of a traditional background.

You married your friend Jason Nash’s 75-year-old mom, Lorraine. Do you think you’ll get married again for a prank?
My next one has to be legit. I’m looking. If you have anybody, please let me know. I’m on the market now. I’m fully divorced. Whoever’s nice enough to me, that’s all it takes.