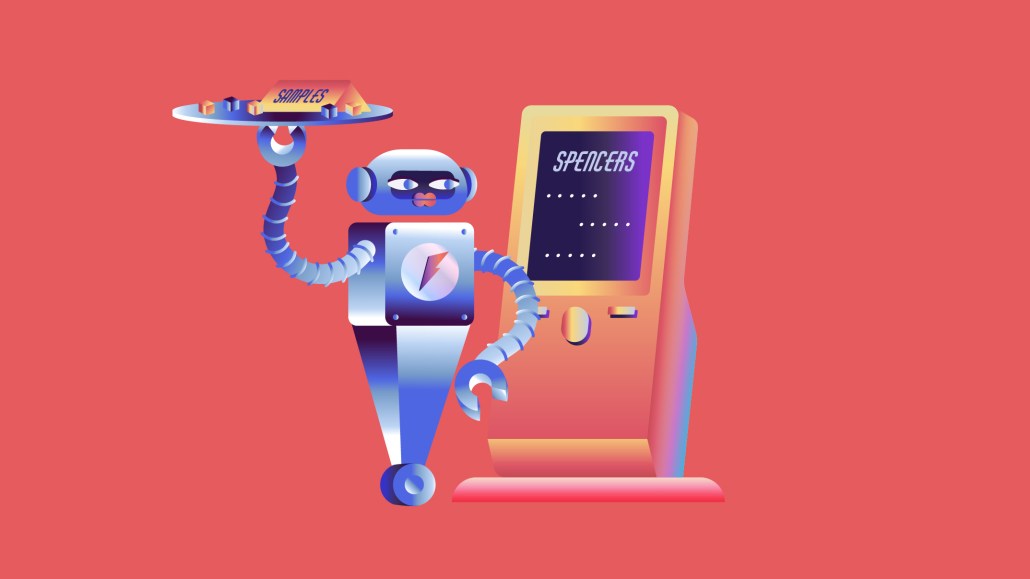 So much for taking inspiration from amusement park-like international malls. In the pandemic world, malls are taking cues from Americans’ newly realized comforts of home.

“We’ve all learned how to merge work and life in a way that we hadn’t before,” said Amy Nelson, president of SaksWorks, Hudson Bay Company’s new co-workspace company. “Now, we pop out of our office and go down to the garage for a run on the treadmill. And we no longer go to 15 different places to get things done. We want that for the next phase.” SaksWorks will launch in five locations, including NYC’s Brookfield Place shopping center, in September.

To seamlessly fit into consumers’ new, ultra-convenient lifestyles — where everything is a few clicks or a short walk away — malls’ transformation into one-and-done destinations is being revisioned and accelerated. In addition to the gyms and array of restaurants they started to welcome pre-2020, they’re increasingly offering workplaces and even residences. At the same time, they’re expanding their retail offerings to include grocery and drugstores. In short, they’re taking the suburban shopping center and making it immersive. Providing efficiency is the point, but — an added perk — they’re also simplifying the new shopping process. One stop means less door touching, sanitizing and fussing with a mask.

“We’re definitely entertaining more co-working spaces at our properties,” said Carina Donoso, senior director of retail experience and incubation at WS Development, owner of shopping centers including Boston Seaport and Tampa’s Hyde Park Village. “We’re also making sure that our food and beverage businesses have ample seating, because people who are working from home may want to relocate for an afternoon to a cafe.”

Industrious, an 8-year-old company offering 100-plus co-working spaces around the U.S., kicked off 2021 with a “work from mall” focus, said co-founder and CEO Jamie Hodari. It began testing the concept of inserting its locations in malls in 2018, and has since opened 200,000-square-feet of office space in shopping centers across the country. Its latest is in the One Colorado Shopping District in Pasadena, opened in July. According to Hodari, the hybrid work model of people WFH part-time amplified demand for a workplace that’s “integrated into a broader set of amenities and experiences, rather than high up in a tower.”

Currently, Industrious’ Scottsdale Fashion Square location is nearly at capacity. Plus, its Walnut Creek occupancy has more than doubled since the first quarter, and its Short Hills Mall location in New Jersey is among its most-in-demand locations for part-time members, Hodari said. “We were a little skittish, not knowing whether a Fortune 500 company would feel comfortable holding meetings in a mall,” he said. “But our [mall locations] have exceeded our expectations in every area, including customer satisfaction and retention.”

Ethan Chernofsky, vp of marketing at foot traffic analytics firm Placer.ai, said the current Holy Grail mall setup is a 360-degree workplace environment, with fitness centers that local workers and residents can use any time of day, and restaurants, so they can take advantage of their lunch hour. “For regional malls, a workplace element and a big residential component in the immediate vicinity are key,” he said.

A decade in decline
Over the last decade, malls’ reputation has been crumbling, fueled by the instability of their key components: Popular department store anchors have closed their doors, and traditional “malls stores” have been in and out of bankruptcy. More than 60 major retailers filed for bankruptcy in 2020. What’s more, e-commerce has been on the rise, especially in the last 18 months. Shopping centers and retailers that began using vacant stores as fulfillment centers only exacerbated the problem, reducing potential draws to the mall.

The widespread narrative leading up to the pandemic was that grand, unique experiences would be needed to keep malls thriving. In the 10 months leading up to March 2020, NYC’s $25 billion Hudson Yards property debuted with the Vessel, a 150-foot interactive art installation perfectly suited to selfies. The attraction closed in January after multiple suicides. And New Jersey’s American Dream mall rolled out a record-sized waterpark, a 16-story ski slope and an NHL-regulation ice rink, among other attractions.

Both Hudson Yards and American Dream were big bets that had a fair share of issues pre-pandemic. Those included years-long opening delays — 16, to be exact, for the $5 billion American Dream. When Hudson Yards opened, 15% of its stores were still vacant, and tenants were anxiously awaiting promised tourist traffic. After announcing eight months before that its retailers would open in March 2020, it revealed it would instead open stores in stages through September 2020.

Though a challenge to pull off, there’s still a place for “regional retail and entertainment hubs, where people will spend 6-8 hours of a day,” said Chernofsky. But on the other extreme, successful malls are more often championing “a work-play-live environment that has it all.” It’s the malls that have remained heavily reliant on retail that are becoming irrelevant — and shuttering.

A new type of strategic planning
“The notion that the mall as an institution is struggling is largely based on an unfair [grouping] of top-tier malls, and even a tier or two below, with these regional supermalls,” Chernofsky said. Known as Class A malls, top centers bring in more than $500 in annual sales per square foot. They were thriving pre-pandemic, though still at the mercy of mall headwinds. Recently, Class C malls — defined as those making less than $300 per square foot — determined to turn things around have also begun implementing new office and residential spaces.

“A large percentage of [malls] aren’t serving the same purpose that they were created to serve, but they’re [hosting] exciting things that debunk all the negativity around them,” Chernofsky added.

Case in point: Some of SaksWorks’ locations will be in spaces once occupied by Lord & Taylor department stores. HBC sold Lord & Taylor in late-2019, and it’s now online-only.

A big difference-maker is whether a mall is being run by strategic planners or just a landlord. According to Chernofsky, vacancies at malls are not necessarily a sign that a mall is in trouble. Many times, they’re a “self-inflicted” scenario by a choosy developer. “It’s hard to fill a space because they know exactly what they want in it,” he said. “They have a plan and a vision, and it’s catered to the audience they want to serve.”

For example, they may be gunning for a co-working space that will clinch steady foot traffic in off-peak retail hours of Tuesday through Thursday from 4 a.m. to 4 p.m. Industrious hosts people from 60-65 companies at each of its locations. “Those people are hosting meetings, and they have people coming into the mall for all sorts of reasons,” said Hodari. “Then they grab lunch, they shop.” The foot traffic at Fashion Square “nearly doubled” in the year after Industrious opened there, he said.

Increasingly, such decisions are being informed by data on what locals want. For mall properties, “a chief insights officer is going to be the [key] role of the future,” Chernofsky said.

For its part, WS Development is setting its sights on more health- and wellness-focused tenants and is dedicating spaces to short-term pop-ups. Its Boston Seaport has The Current, made up of nine 180- to 380-square-foot rotating shops. At the same time, it’s educating those tenants on keeping regular shoppers engaged — even when they return to their screens. “We tell them, ‘The consumer journey starts here,’” said Donoso. “Their social media, their website and their physical store design have to be fabulous. Today, they’re all part of the same ecosystem.”

In general, malls have already nearly nearly bounced back to pre-pandemic levels. Placer.ai data, based on insights from 100 American malls, shows that July 2021 visits were down just 0.2% compared to the same timeframe in 2019.

And many retailers that have been mall mainstays still see much value in being there. “For some of our customers, the mall is still very critical to their afternoons; it’s where they hang out, and we want to support their habits and lifestyle,” said Alfred Chang, co-CEO of Pacsun. Likewise, Footlocker CMO Jed Berger said, “In certain areas, the mall traffic is phenomenal. And we want to be there to celebrate sneaker culture with our communities.”

In addition, retailers that have never considered a mall location are newly going there, with many seeking an alternative to high customer acquisition costs online.

“‘Do we want to be in a mall?’ is a debate we’ve been having internally,” said Jeff Lotman, owner of L.A.-based Fred Segal. “At the end of the day, there are a lot of people there. Our customers go there. And why do bank robbers rob banks? Because that’s where the money is.”