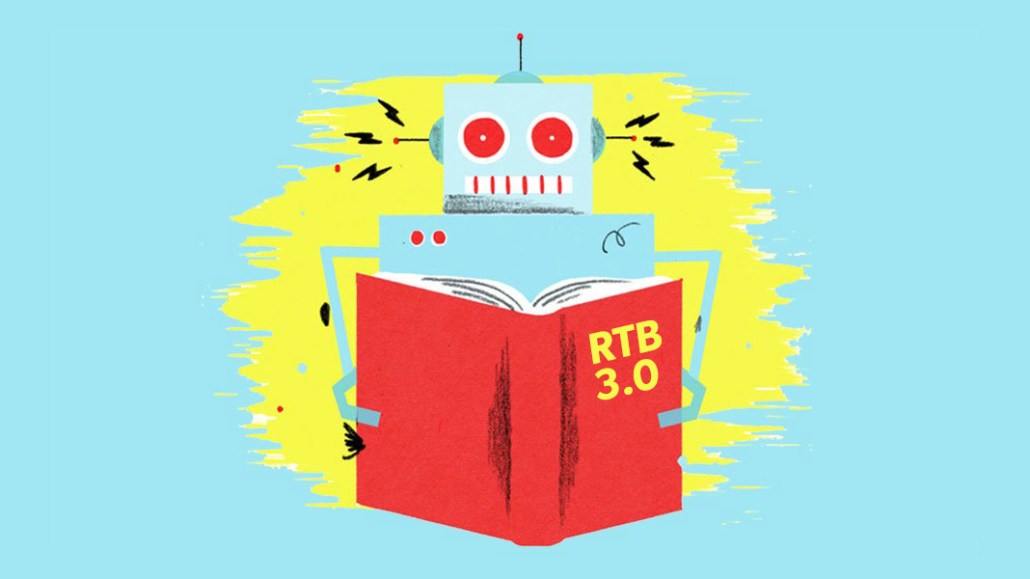 Ad tech is constantly moving to the next new and shiny thing. And with that, we bring you real-time bidding 3.0.

Since programmatic buying has gotten more complex and remains ever murky, an Interactive Advertising Bureau Tech Lab working group is designing new procedures to bring more clarity to the byzantine digital ad-supply chain. Digiday spoke to three members of this working group, who broke down how it works.

WTF is RTB 3.0?
It is a new protocol that could change the automated buying and selling of ads — if exchanges adopt it. The structure of RTB 3.0 cuts down duplicative code, which will drive faster bidding. It also requires everyone in the supply chain to provide an authenticated signature to the impressions they touch, which will give ad buyers more visibility into where the inventory they’re buying originated from.

What is the difference between this and other RTB guidelines?
RTB 2.0, which came out in 2012, set guidelines around mobile programmatic buying. But it did not forecast the rise of header bidding — which lets publishers simultaneously offer inventory to multiple exchanges before making calls to their ad servers — or the complexity of today’s supply chain, said Ian Trider, director of RTB platform operations at DSP provider Centro. RTB 3.0 attempts to address the problems that these trends created.

How does it do that?
Header bidding led to an explosion in bid requests, which strains programmatic platforms since they have to process these requests. With current RTB protocol, there are different specs for the open exchange, over-the-top video and programmatic guaranteed inventory. So if a publisher was pushing open-market and programmatic-guaranteed deals through the same exchange, the exchange would have to run multiple specs for that publisher.

But many of the variables in these specs, like the publisher’s ID and the category of their content, overlap. With RTB 3.0, the specs will be restructured so these variables aren’t repeated in the exchange’s code.

“This reduces the compute load to process traffic, which should make bids run faster and require fewer servers to process them,” said Bill Simmons, CTO at DSP provider DataXu.

OK, but how does RTB 3.0 address the complex supply chain?
It will demand that each link in the supply chain signs off on every ad impression they touch. The technical details are still being worked out, but the idea is that publishers and vendors will stamp their encrypted IDs onto impressions so that buyers can ensure the true source of the supply, said Curt Larson, vp of product at native ad firm Sharethrough. The hope is that this will cut down on shady practices like domain spoofing.

Isn’t that what ads.txt does?
Sort of. Ads.txt is a lot simpler implementation since it only requires companies to upload and update text files. RTB 3.0 is more of an overhaul since it requires exchanges to restructure their underlying code to provide encrypted signatures. Ideally, the two will work in tandem to provide more clarity around the opaque supply chain.

What does RTB 3.0’s timeline look like?
Nothing formal has been announced because the technical details are still being debated among the IAB Tech Lab working group. Larson suspects the protocol will be opened to public comment in the next month or two and a beta version of it to debut around January.

This sounds great. Are there any drawbacks?
Any company wanting to implement the protocol will have to devote engineers and developers to restructuring their platforms. And like ads.txt, success of RTB 3.0 also depends on network effects.

“It can have amazing benefits,” Larson said. “But it is a change that people would have to adopt, and there is a lot of momentum in this industry.”