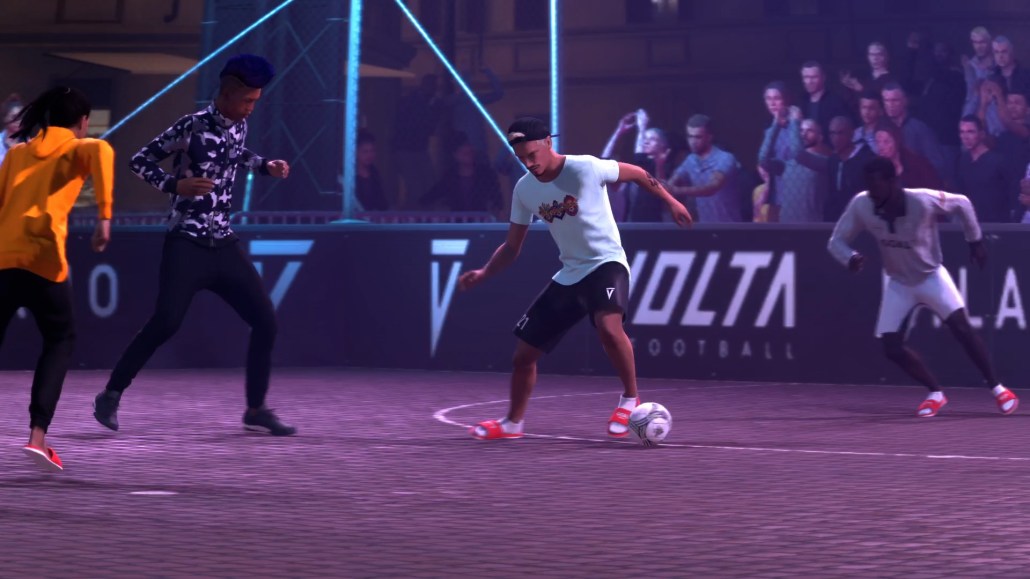 Over the last month, players of the game have been able to deck their in-game avatar out in kit from the football-inspired lifestyle brand from Goal — Goal Studios. The collection includes T-shirts, hoodies and flip-flops from popular collections from the range as well as an exclusive digital outfit that’s only available in the game — specifically the Fifa Volta street football mode. Clothing can be unlocked after players complete various in-game challenges or use Volta currency to purchase them.

While fans aren’t able to buy the virtual threads with their own physical cash, there might come a time when they do. The way those behind the deal see it video games are emerging as a mainstream channel for online branding, and even sales. Whether it’s in Fifa or elsewhere, virtual goods could become a revenue stream for the business as it searches for new ways to make money outside of advertising.

“Our core business is still content commercialization so we have to be making moves like this,” said Stefano D’Anna, president at Goal’s owner FootballCo. “It’s really important for the long-term preservation of the business to break out of the standard way of getting media deals from agencies and our work with developers like Electronic Arts.”

In fact, the deal has opened up new commercial opportunities with Electronic Arts, added D’Anna. He declined to say exactly what those opportunities are but added they would be discussed for next year’s iterations of the Fifa game. “We’re not going to these types of deals if we’re just a publishing brand thinking about media dollars.”

Commerce ambitions aside, the partnership is a marketing ploy for the clothing range, which has proved popular in Korea. So much so that Goal Studio became the kit supplier of K-League side Daegu FC earlier this year.

“For the first time in Goal’s history, there’s a pure focus on audience development,” said D’Anna. “This means exploring particular pockets of communities within the football world. We’ll look to try and satisfy all fan’s needs within football across various touchpoints using content as the transactional currency.”

Like many media businesses, Goal is trying to figure out how to manage its IP in a way that’s fluid. Doing so makes it easier to nurture community because every time it extends that IP into new areas it’s a chance to take the brand into new fandoms. And if this happens it creates a springboard into even more fandoms and subsequently more chances to make money. Understandably, in-game purchases are high on this list.

“In-app purchases are a $100 billion market, so they are definitely mainstream with publishers and are widely adopted by players,” said Samuel Huber, CEO of gaming ad tech vendor Admix. “Activations we have seen so far are all one-offs. “Even serving simple banners in-game in a scalable way is relatively new! Let alone commercial activation that is not a standard format. So the least standard format takes the longest to adopt.”

But gaming is on the crest of a hype wave and advertisers are starting to test its potential as a place for their ads. Tools are now being developed by companies like Admix to make in-game activations as easy as buying banner ads on the web. The likes of Goal are trying to use their ties to developers like Electronic Arts to steal a march on their rivals.