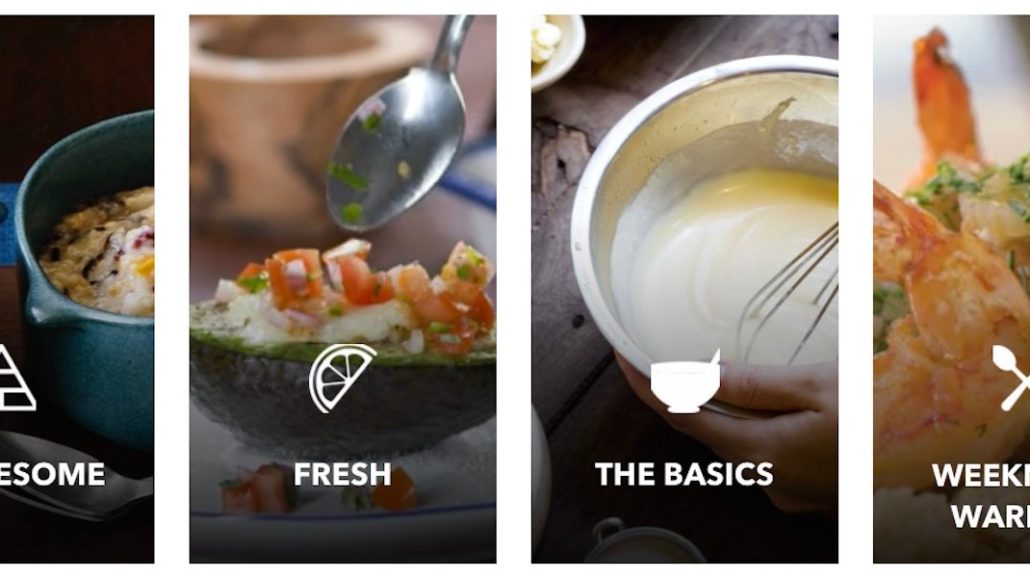 When Snapchat rolled out Stories in 2014, it didn’t take long for Instagram and Facebook to copy the feature. Now publishers and brands are updating their own apps and mobile sites with similar features to drive engagement.

Brands like Virgin and publishers like Food Network, Entertainment Weekly and People are adding sections to their apps called Stories. These Stories aren’t designed for people to share but rather for brands and publishers to share their own content, mostly vertical video, made popular by Snapchat’s Discover section.

Scripps-owned Food Network added a Stories feature to its Food Network In the Kitchen iOS app on Feb. 7. The idea is to get young people to interact with snippets of content, according to Vikki Neil, gm of Scripps Lifestyle Studios, which created the Story feature in-house.

As with Snapchat and Instagram, each Story in Food Network’s app shows a video or photo and sometimes the option to scroll up to see more content, such as a full recipe or instructional video. But unlike Snapchat, Food Network’s Stories appear directly on its app’s homepage in a series of panels categorized by trending topics such as “wholesome” or “fresh.”

Neil said Food Network saw how its Snapchat audience and Instagram followers were interacting with Stories on those platforms and wanted to bring the same feature to its app. With more than 70,000 recipes in the app, Neil said Stories can help users discover ones they might not see otherwise.

Other publishers like People and brands like Virgin are working with New York-based startup Apester to develop their own Stories. Apester Stories, which resemble Snapchat Stories, can be embedded into a brand’s or publisher’s CMS and from there be added to apps, mobile websites and articles online. The format can be used to share GIFs and quizzes as well as photos and videos and ads can appear on top of Stories.

For instance, People on Feb. 7 added an Apester Story to an article online and on its mobile site about Marvel’s new “Black Panther” movie. The Story asks questions like, “What are Black Panther’s superpowers?” In October, Virgin added a Story to its website that features Virgin Group founder Richard Branson, among other entrepreneurs, giving advice on starting a business.

Moti Cohen, CEO and co-founder of Apester, said its Story product lets publishers and brands create visual stories and embed them anywhere, extending their social strategy across the web. Apester is also taking advantage of the reaction to Facebook’s news-feed changes to promote the product to agencies, saying that Stories can generate more engagement for brands and publishers beyond social media.

It’s not surprising that publishers and brands want to incorporate Stories into their own apps and mobile sites. The Stories format has proven popular on Instagram, Snapchat and even Facebook to a certain extent. Instagram Stories are used by more then 250 million people a day, the platform announced in June.

If anything, publishers and brands can expect that Stories will be shared more widely. At the end of January, Snapchat announced it would let users share their Stories across any social platform. In its quarterly earnings, the platform also said it would bring Stories to big screens at the Rose Bowl and Sugar Bowl.