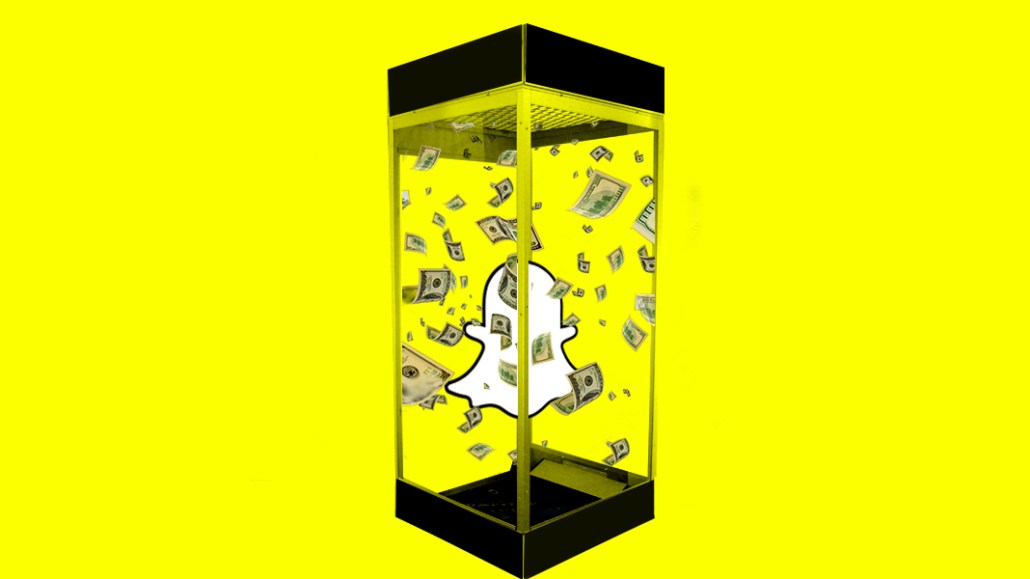 Snapchat appears to be winning over several early adopters of its new dynamic ads product.

The continuously updating ads directly link to product catalogs and are automatically targeted to Snapchat users based on their past behavior. Snapchat officially launched this ad product just before the 2019 holiday season after a year of beta testing.

Some ad buyers who used dynamic advertising to promote their clients’ products over the 2019 holiday period reported a few hiccups to Digiday but nonetheless a lower cost-per-thousand impressions (CPM) rate — and a higher or at least similar return on their spending than they have found on other social media platforms, including Facebook and Instagram.

“We’ve been pleasantly surprised by how Snapchat has evolved in the last few months,” said Katya Constantine, CEO of Digishop Girl Media. Previously, she has said her clients, which include companies like Noom and Away, had not found high-enough click-through rates on Snapchat, as compared with Facebook and Instagram, to convince them to spend more on Snapchat.

But during the 2019 holiday season, some of Constantine’s clients gave Snapchat’s dynamic ads a try and were pleased with the results, especially with the boosts in brand awareness. Although Constantine said they found lower conversion rates on Snapchat than what they found on other platforms, she added, “it’s OK; you’re making up for it because your traffic is so much cheaper, your cost per acquisition is still netting out.” For example, she found it cost 50 cents for a click-through on Snapchat versus $2 on Facebook.

Tyler Kasupski, Buckland Co’s director of digital advertising, said one of his clients, the women’s apparel brand Ivory Ella, experienced similar results. Because it costs significantly less to serve impressions on Snapchat, Kasupski said, his agency can drive the same amount of traffic as he would deliver by using Facebook or Instagram — but for a lower expenditure. He allowed that the level of engagement on Facebook or Instagram might be higher, though. Ivory Ella’s dynamic ads posted during the 2019 holiday season delivered a return of 1.5 times the ad spend when placed at the upper funnel of the advertising process (for brand awareness) but even as high as 6 times at the lower funnel (where sales occur).

A Swarovski marketing executive said during the holiday period the CPM for its Snapchat dynamic ads was 39% lower than that of its other ads on Snapchat. While she didn’t have final conversion numbers to share, she said the company saw “tremendous click-through rates and purchases.”  Compared with what Swarovski has found for its ads on other social media platforms like Facebook or Instagram, its Snapchat dynamic ads delivered twice as high a return on its investment.

Agency Within’s director of performance marketing, Asher Chester, reported healthy conversion rates for the dynamic Snapchat ads that his agency ran during the 2019 holiday season for its apparel and footwear clients but cited some “trade-offs.” While the conversion rates for Snapchat’s dynamic ads were two to three times higher than for Snapchat’s standard retargeting ads, the costs per click (or swipe) were 75% to 80% higher, he said. Yet as a whole, the costs balanced out, said Chester, whose agency’s clients include Purple, Greats and Spanx.

Chester, like Kasupski, also detected lower engagement rates on Snapchat as compared with what he found on channels like Facebook and Instagram. “The engagement rate as a whole wasn’t as high, below half of a percent, but those who did engage with the ads had really high intent and conversions were at 10%,” he said.

In other words, for some advertisers, Snapchat proved to be a more cost-effective channel for advertising than Facebook or Instagram, but they aren’t anticipating that this will necessarily remain the case for long.

Havas Media vp Tessa Kavanaugh said her clients found the CPMs for Snapchat’s dynamic ads were almost five times lower than what they have found on Facebook, but she added, “It’s not an apples to apples comparison” because of the difference in scale. “I expect more brands to jump on board, and it’s great for brands to take advantage of this now.” Her agency handles advertising for household brands around the world.

The ad buyers and company marketers that Digiday spoke to, however, said they’ll continue to buy advertising on Snapchat, thanks to tools like dynamic ads — and because Snapchat is beginning to reach an older demographic group of users.

“There’s always been this conception that Snapchat skews very young, for the 16- to 21-year-old audience, and there is a large audience there,” said Yianni Kotsalidis, a senior manager at digital marketing agency Tinuiti. “But the loyal fanbase that was ages 16 to 21 and is now older is still relatively loyal, and they’re in their purchasing years now.”

While most of the ad buyers that Digiday spoke with also said they had experienced few challenges in using dynamic ads, Chester reported some difficulty in making sure the product names showed up in a more aesthetically pleasing way and he had to resort to manually manipulating the feed.

With its dynamic ads, Snapchat is showing that it can do more for advertisers and brands than just build awareness, Kavanaugh said. “Give it a try because you won’t know unless you give it a try.”

Editor’s Note: Ivory Ella’s dynamic ads posted during the 2019 holiday season delivered a return of 1.5 times the ad spend when placed at the upper funnel of the advertising process (for brand awareness) but even as high as 6 times at the lower funnel (where sales occur), not 1.5% or 6% as previously stated.