Future of TV Briefing: In 2021, TV, streaming and video productions returned to business as usual and became unusually busy 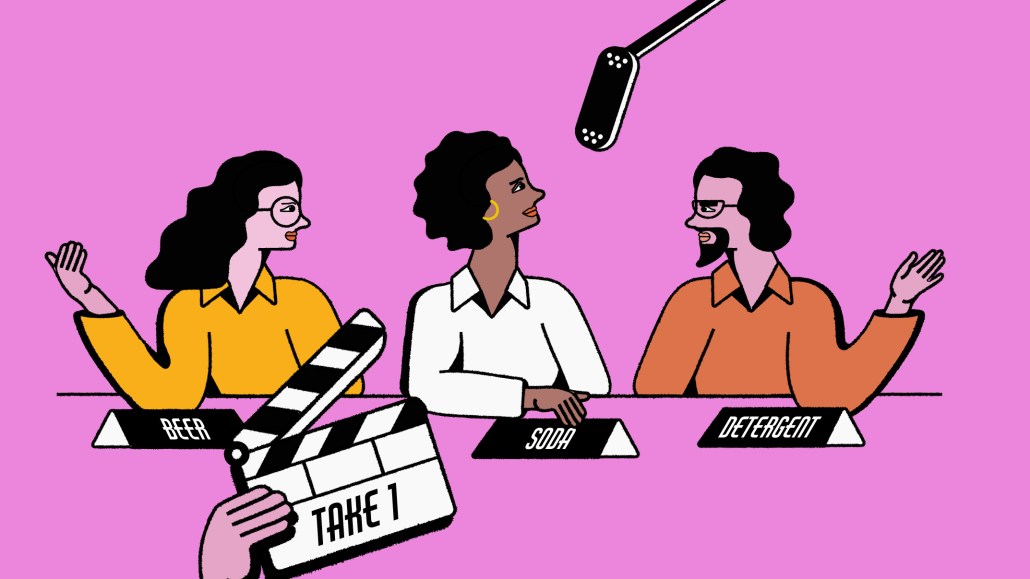 The Future of TV Briefing this week looks at how TV and digital video producers have settled into a new normal in 2021.

The show goes on

As 2021 comes to a close, the productions of TV and streaming shows, digital videos and commercials are bearing a close resemblance to their pre-pandemic incarnations. OK, not too close. There remain mask mandates and testing requirements in place. But while productions have not completely returned to normal, they have settled into a new normal, according to producers.

“It’s definitely a new normal. I wouldn’t say it’s normal,” said Mike Larocca, co-founder and vice chairman of AGBO, which has produced movies and TV shows for Apple, Amazon and Netflix. “I think people have adjusted to [the production-related changes necessitated by the pandemic] and gotten used to it, and the practices have gotten pretty advanced and pretty resourceful, and we’ve managed to absorb any issues pretty effectively.”

“It feels totally normal now. There is no show that has been pushed or held because of an inability to be made during COVID. We’ve figured out a way to do pretty much anything that we would do [under normal conditions],” said Chad Mumm, svp and head of entertainment for Vox Media’s Vox Media Studios, which has produced shows for HBO Max, Hulu and Netflix.

“As things stand now at the end of 2021, ‘business as usual’ is not the exact right phrase, but having adapted to the new normal, it does feel like business as usual,” said Aaron Saidman, president of Industrial Media and president and co-founder of Industrial Media-owned production studio The Intellectual Property Corporation, which has produced shows for HBO Max, Hulu and Netflix.

“Business as usual” doesn’t capture the entire situation, though. Production businesses are unusually busy — even compared to their pre-pandemic project loads.

Producers are unusually busy because of a mix of reasons: the streaming wars are intensifying, video viewership is surging and companies have ironed out how to deal with the complications of producing during a pandemic. From TV and streaming shows to digital video and commercial shoots, projects began returning to in-person productions in the summer of 2020, taking health and safety measures like requiring people to get tested before showing up for a shoot and to wear masks and maintain physical distance on set.

“Now [following those protocols] is basically instantaneous. We all know what the testing policy is and what the [personal protective equipment] policy is. Food is packaged individually. All those things have become totally automatic,” said a production executive who works on digital video and commercial projects.

Even the COVID-related costs added to production budgets have become considered conventional, according to the executives interviewed for this article. “It doesn’t feel like a financial burden to us. It’s an industry standard now,” Mumm said.

Of course, the pandemic can still impact productions beyond requiring them to maintain the aforementioned health and safety protocols. AGBO, for example, has had situations where people working on projects have tested positive for COVID, but the company has been able to adapt by pausing only parts of production or temporarily shutting down a given department without putting an entire project on a hiatus. “We’re good at being able to not shut down a production but keeping the effects to specific cohorts so we don’t lose the production,” Larocca said.

The ability for productions to not only protect their casts and crews against the coronavirus but also to adjust when people tested positive meant that the delta variant’s rise this past summer did not derail the return to production. “It certainly didn’t slow us down,” Saidman said.

In fact, companies have picked up the pace of production during the pandemic, thanks to newfound efficiencies like remote production capabilities and in response to the surge in demand for programming.

“We’ve doubled the number of projects in production from this time last year. It’s unquestionably the busiest we’ve ever been, so we’ve had to staff up to meet that demand,” said Mumm. He added, “some of our creative execs went from overseeing two shows to overseeing six, and that’s a lot.”

Among the most recent signs of how productions have arrived at a state of relative normalcy is the expansion of shooting locations. For the first two seasons of “Selena + Chef,” which IPC produced for HBO Max during the pandemic, the production was largely remote — with professional chefs effectively teaching star Selena Gomez to cook via video calls — and even then limited to featuring chefs who lived within some proximity to Gomez’s home in Los Angeles.

But for the third season, which premiered in October, IPC was able to set up shoots internationally. “For example, there’s an episode with Jamie Oliver where he’s in the U.K. That was owed in part to being able to figure technically how to be farther away and still have a really sound connection between the chef and Selena in real time and having a very well-thought-out system for how the remote production team sets up and films that chef wherever he or she may be located,” Saidman said.

Similarly, Food52 hosted its first international shoot since the pandemic’s onset in September. The publisher sent a two-person crew to France for a video about cookware maker Poterie Renault as part of its “Maker” series. “As a result of being able to work with talent in so many locations with a self-shot style there is an expectation from other teams now that we can figure out a way to work with talent in a number of locations,” Mangino said.

For as stable as the production business seems to be after the ups and downs of the early pandemic, the pandemic continues to be a reality that producers must acknowledge and expect to be working under for the foreseeable future, even after the general population has discarded their masks. “The reality is we’ll be in this new normal for at least several years, but hopefully will not take a step backward from this,” said the digital video and commercial production executive.

The omicron variant would seem to pose a threat to the status of production. However, so did the delta variant, and as mentioned above, the health and safety protocols put in place enable productions to withstand that wave. At this point, the production industry has proven its resilience through what has been (hopefully) the worst of the pandemic and is willing to continue to do so.

“We’re aware the pandemic hasn’t gone away,” said Saidman. “Safety and responsibility is our first priority on any set, on any production. So you know going in what the reality is. You go in with a set of safety protocols you’re confident in because you’ve had time to work with them and refine them and adapt them — and the rest of it is that old saying, ‘The show must go on.’”

“I feel like [repurposing user-generated videos on TikTok] is a cheat code, but the algorithm rewards that shit. I’m trying to get us to rally and commit to original content only on TikTok. We’re not there yet, but we’re moving in that direction.”

As much as ad-supported streaming services don’t want to overwhelm audiences with ads, they are also wary of limiting their ad revenue opportunities. To split the difference, some are carving up their existing ad loads to create new pockets of inventory.

In October, Discovery’s Discovery+ began running ads that appear when people pause a show, which is an ad format that Hulu introduced in January 2019. Meanwhile, others like Rakuten’s Viki are looking to shorter-length ads that can multiply the number of ads that can be inserted into an ad break without extending the break’s duration.

“What we’re seeing and are actually starting to play around with is, if it is a 6-second [spot] — it’s a weird time globally, I want to say it’s like 12 seconds, which is not as common in the U.S. — we can get higher price points and the consumer reacts the same way to that spot because it’s the same timeframe [for the overall ad break],” said Amber Lockwood, vp of media sales for North America at Rakuten Advertising.

One TV network executive said they are considering specifically adding 6-second ads to their company’s streaming ad portfolio as a way to attract the digital-native advertisers that are likely to be running these spots on YouTube. This executive said they are also looking into add-ons to standard ads, like ways for people to click on an ad to send a link for the advertiser’s site to their phone or computer, as a way to increase the prices of those ads and raise revenue without expanding the overall ad load.

“We’re forcibly constraining the ad experience to make for a better user experience. But we also have a business to run,” said the TV network executive.

$3.5 billion: How much money advertisers spent on Hulu, Paramount+, Peacock and Tubi from October 2020 through September 2021.

>$250 million: How much money Snap paid to creators in 2021 through its Snapchat Spotlight program.

4: Number of acquired shows that accounted for at least 1.5% of U.S. watch time in the third quarter of 2021. None of Netflix’s original shows reached that threshold.

1.98 million: Average number of viewers who tuned into college football games on Disney’s TV networks, including ESPN, this season, a 2% increase compared to the 2019 mark.

How Duolingo is using its ‘unhinged content’ with Duo the Owl to make people laugh on TikTok:

How Vivid Seats is using video to diversify its media mix:

Paramount+ goes live:
ViacomCBS is adding 18 linear channels to its Paramount+ streaming service. The addition of TV-style always-on channels to the streamer is not necessarily surprising, considering the company owns one of the preeminent linear streaming services Pluto TV. What is surprising — in addition to the channels being ad-free for now — is that these are not Pluto TV channels being ported to Paramount+, presaging a roll-up of the services — though that door remains open. In an interview with Vulture, ViacomCBS CEO of streaming Tom Ryan said there are no plans to combine Paramount+ and Pluto TV “to announce at this time.”

David Zaslav’s streaming wars strategy for Warner Bros. Discovery:
Poised to take the reins of the merging Discovery-WarnerMedia next year and ascend into the highest ranks of media moguldom, Discovery CEO David Zaslav is becoming the subject of myriad profiles. In the latest by Variety, he talked about how an initial focal point will be deciding how Warner Bros. Discovery doles out its content dollars, though he’ll also be needing to decide where to put that content, including whether to combine Discovery+ and HBO Max. Initially, the company will be adopting the bundle approach that has been helping Disney attract and retain streaming subscribers.

Publishers aim for Oscars:
The New York Times and The New Yorker are in contention to receive Academy Award nominations for short-form documentaries they have produced, according to The Hollywood Reporter. While publishers’ pivots to video are often associated with attempts to attract ad dollars, the potential accolades indicate that some publishers are succeeding in becoming part of the entertainment firmament and that success seems to be tied up in the barrier to entry being lowered by the availability of cheaper production and postproduction tools. It also seems aided by publishers being in a position to secure brand sponsors for short documentaries, which are notorious for facing financial challenges.