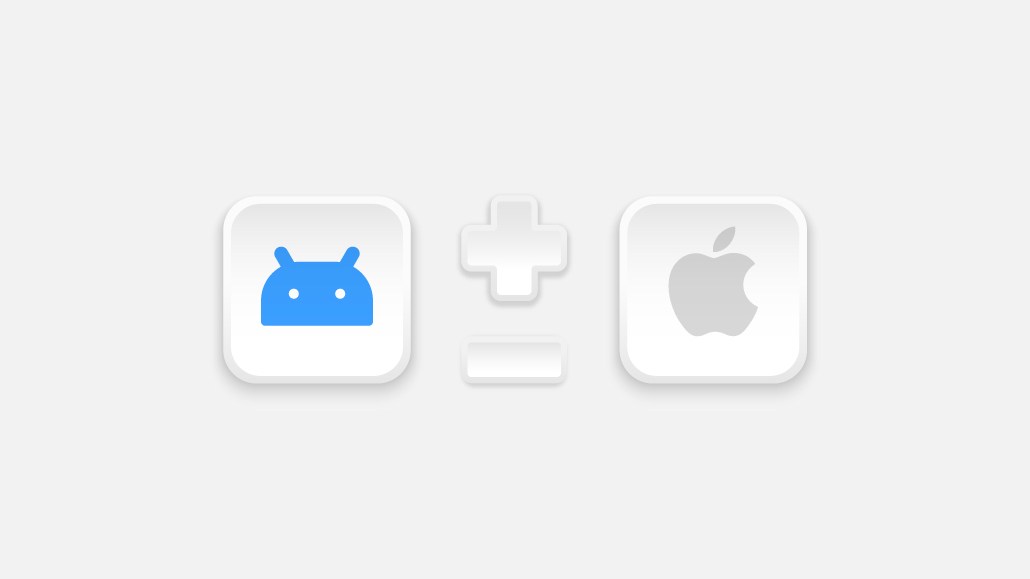 Brand advertisers are increasingly adopting a new imperative — they’re identifying the different ways they can approach Android and iOS apps when planning their advertising campaigns.

While there are some common apps that appear across both types of devices, there are many that are distinct to one or the other, in terms of both offerings and what the operating systems allow marketers to do with them.

If advertisers fail to take this into consideration, the results are missed impressions and customers never reached. However, for those working to game the nuances between Android and iOS offerings, the chance to unlock new marketing opportunities is expanding with a focus on targeting, app usage and partnerships to help bring campaigns across both systems together.

The differences in apps between Android and iOS are at least twofold. While there are iOS-exclusive apps to which Android users do not have access, there are, overall, many more apps available on Android than iOS.

How are advertisers deciding which apps on which system they should address in their campaigns? To start, experts advise, focus on the outcomes and not the operating systems’ offerings.

“It depends on what and who you are trying to target and what your budget is,” said Ben Abt, senior vice president, group media director at MediaHub Global. “I would recommend working across both iOS and Android and not letting the difference in the number of available apps be a limitation in any way at the beginning.”

Building on that initial tip, targeting one specific app is not recommended.

“If you’re using SDK-based ad networks for app installs, for example, they generally have an agreement with the vendors that you can’t target an individual app,” said Abt. “And doing so unnecessarily limits the number of impressions possible. Target a group of apps instead.”

And so, targeting groups of apps is the way to go, such as financial apps, which would include those related to cryptocurrencies.

And when doing so, certain groups contain different apps between Android and iOS. One example is the mobile gaming group, in which 62% of Android users are playing mobile games exclusive to that OS, while 66% of iOS users do the same. There are differences between audiences in those two exclusive groupings, and advertisers can craft campaigns to incorporate those differences in their messaging.

One major difference between iOS and Android lies in the ways privacy tools and regulations are implemented.

In particular, Apple’s iOS 14 and iOS 15 updates have allowed users to be more in control of what information is being tracked in a specific way — it starts with a no-tracking default, and then the user has to opt-in via prompt to allow individual apps to gather data. Meanwhile, Android device IDs are still turned on by default, like iOS was pre-14.5, making device-level targeting and attribution much more transparent for advertisers.

“Google is taking an opt-out approach, while Apple is taking an opt-in approach,” said Abt. “With the Android opt-out approach, people may not be willing to go the extra mile it takes to find the way to opt out of something, so I think that will have less of an impact overall, whereas opt-in is frightening for advertisers because people can simply do nothing and they’re gone.”

To help mitigate that effect on iOS, brands and advertisers are turning to contextual targeting. However, the same targeting approach will also pay dividends on Android users who have opted out, as well as preparing marketers for any future changes.

Global marketers must also keep in mind that outside of the U.S., most mobile phone users are Android users. As of June 2021, approximately 73% of customers worldwide used Android, while about 26% used iOS.

“It depends on your KPIs,” he added as a caveat. “We still have some people opting-in that we’re allowed to target on iOS, but it has swayed significantly toward Android. If you have a more performance-driven client, they’re leaning more toward Android. However, if the account is more awareness-based, it’s more agnostic because they aren’t looking for that granular targeting. You’ll see more spending on iOS, in this case, as advertisers are seeing what happens.”

And for those companies looking to create truly global mobile app campaigns, there are several things to keep in mind. For example it’s critical to adjust for differences in behaviors around frequency of use by app based on the operating system and the location. In Europe, for instance, 69% of Instagram users who use the app at least weekly are on Android devices — a significant difference from the same statistic in the U.S. (43% for Android).

That’s driving a mindset shift around campaigns and regionality.

“We can’t do a one-size-fits-all campaign in mobile when it comes to tracking and data usage,” said Abt at MediaHub Global. “We run regionally instead, so that we can account for GDPR in EMEA, for example.”

How to choose the right partner for cross-operating-system strategies

With so many nuances in the cross-operating-system approach, it’s common for advertisers to need additional resources. Not every marketing team is equipped with everything required to parse targeting, privacy and usage in so many different ways.

“Number one is scale, number two is a clean supply chain — meaning no arbitrage traffic and working directly with the SDK to get as close to the supply as possible to pay as little ‘ad tax’ as possible,” he continued. “And then it’s making sure the partner has an understanding of the audience.”

All in all, marketers must be more nuanced in their approach to mobile app targeting, rather than simply iOS versus Android. Even though iOS currently has more targeting restrictions, there are still effective ways to reach this audience. It comes down to goals and KPIs — and shifting strategies to stay ahead of future changes to targeting and all the tools and regulations that go with it.