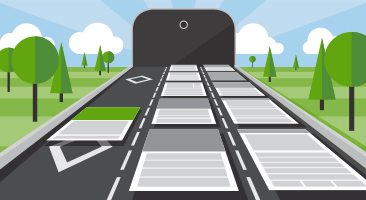 This article was written by Marc Theermann, EVP Strategy

Today’s “always on, always connected” internet-based world generates a lot of data. According to IBM, we create 2.5 billion gigabytes of data every day. If one gigabyte represents one mile, we create enough data to circle the globe more than 100,000 times every day.

With the continued rise in mobile adoption, social media and user-generated content, this number will only grow. We are creating data at an unprecedented rate.

Programmatic (or automated) buying and selling of ad space not only generates, but relies on data to help marketers get the most out of their ad dollars by increasing the efficiency and effectiveness of their buys. It’s how that data is analyzed, segmented and put to use that brings benefit to advertisers.

If you’re unfamiliar with how programmatic buying works, its benefits and how to maximize its use, allow me to use a metaphor that everyone can understand: the morning commute.

Get where you’re going, when you need to be there

When you’re commuting, you have to get to the right place at the right time. All three elements (the person, the time, the place) are crucial. You can’t just pull off the road and head into whatever office is closest when it’s 9 a.m. (Today at that time, for example, I was stuck in traffic near a hospital; no one wants me in an operating room.)

Similarly, it’s unhelpful to your clients and colleagues if you show up to your workplace at midnight on a weekend.

Finally, you matter. Your particular skill set is crucial to getting your job done. If a surgeon showed up promptly at your office at 9 a.m. for the meeting on ad buys, the good doctor wouldn’t know what to do.

Envision your ad’s journey to your ideal customer as a commute to work: You want the right ad to reach the right person at the right time.

When city planners design new roads, they look at commuter behavior and traffic patterns. Which routes are most common? What time of day, and days of the week, see the heaviest volume? Where are the bottlenecks?

This data is analyzed to determine the right numbers of roads with the right number of lanes. They’re then built in the right locations to help people reach their destinations most efficiently. Express lanes, toll roads or HOV lanes are sometimes created — ideally, based on what the data shows.

Extending our metaphor, programmatic buying analyzes data to determine traffic flow. Your ad needs to reach to a particular workplace (the right user) at a particular time (when that user is ready for its message).

In just fractions of a second, real-time individual impression data is analyzed to optimize creative, audience and campaign performance based on “traffic patterns.” These metrics include views, clicks and conversions based on day, time, mobile app or website, location, audience, device and a host of other variables.

Pay for the HOV lane

Think of Private Marketplaces (PMPs) as a high-speed toll road for ads. They’re gaining popularity in the mobile programmatic space.

Like premium toll roads, there’s less traffic (ie, competition for impressions) in a PMP. Buyers are therefore likely to win more impressions and get greater predictability on ad spend due to a more controlled environment. Often, publisher inventory is super-premium and may not be available elsewhere.

As a result, these ads can roar down the PMP highway for a nominal cost. For more marketers, that’s a bargain well worth making.

Don’t get stuck in the slow lane

As any commuter knows, you should optimize your daily route. The same goes for buying impressions on PMPs. Programmatic makes use of data in real-time to provide the most efficient, effective path for your ad. Through ongoing, data-based iterations, your ad can avoid bottlenecks and detours.

Connecting the right message to the right person at the right time is an intricate process. The effective use of data, along with choosing the right tools (and highways) can ensure your ad is delivered efficiently to its destination.