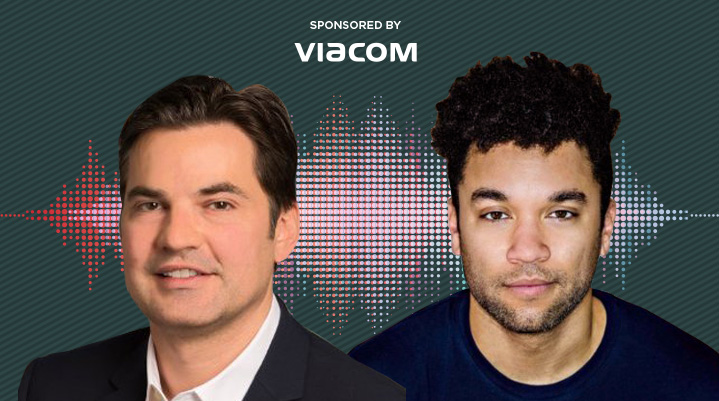 The way TV spots are bought and sold hasn’t changed much since the Mad Men days. Age and gender demographics matched, as accurately as possible, to day parts. Same old, same old. Viacom and its advanced platform, Viacom Vantage, have been working to change that. Using a team of data scientists Viacom is digging into the audiences for some of its flagship properties like MTV, VH1, Comedy Central, and BET to create new segments, pinpoint avid fans, and combine the best of digital targeting with the premium context of television.

We sat down in the studio with Gabe Bevilacqua, senior vp of product management at Viacom Vantage and Kodi Foster, senior vp of data strategy, to learn more about how Viacom is moving beyond the traditional demos that have dominated linear strategy and planning for decades to drill into audiences in a way that sometimes challenges their client’s basic assumptions.

Some highlights from our conversation below:

For Gabe Bevilacqua there’s a misconception that advanced TV is only bringing the sort of segment-focused targeting that’s commonplace in digital to television.

“When we think of an audience segment we have to think more than, ‘Okay, let’s do it like digital.’”

According to Bevilacqua, digital targeting in television might have more to do with making a reach play, managing frequency, or executing a more efficient buy. In the past linear advertisers had to rely on look-alike modeling and big demographic segments targeted by day parts. The digital transformation of television means it’s now possible to reach thinner slices but with the scale of television.

Prepare to have your RFP shredded

The Viacom team isn’t in the business of dancing to their advertisers’ tune right out of the gate. According to Kodi Foster, some of the most satisfying projects the team has undertaken have involved totally unraveling the underlying assumptions of a potential client’s RFP. When the data points in a more advantageous direction, the team doesn’t hesitate to follow it, even if it doesn’t confirm their clients’ initial assumptions.

“They’re saying, ‘this is not my customer.’ My customer is X, Y, and Z.” said Kodi Foster. “ And then we’re like, “But what are you talking about?” Here’s a video of this person saying, “I love your products and this is the only thing I buy.”

By questioning basic assumptions and letting data take the lead, the Viacom team has found some unexpected solutions to client problems and allowed them to deliver on goals rather than assumptions.

A fan is as a fan does

“Ultimately, I think the behaviors [we look for] are just being wholeheartedly passionate about something, whether it’s a person or a thing if you have that you’re a fan,” said Foster, of unpacking the fan experience.

The Viacom team dug into the numbers and interactions on all of its social platforms and owned properties to start associating specific behaviors with fans. Rather than identify fans merely by the things they said they liked, Foster and his team looked at the way individuals behaved in relation to the properties they were passionate about.  If it acts like a fan, and it talks like a fan, then it’s a fan.

Everyone is a fan

There’s an underlying assumption among many marketers the fans are a niche, a small enthusiast audience the doesn’t represent the larger population and which may not be worth marketing to. Bevilacqua calls this a mistake.

“You can look at fan cultures as being very far away from you,” he said. “Like ComicCon, you’re in costume, you’re dressed up. You can look at that and be like, “Hey that’s not me, who are these people.” According to Bevilacqua, from a behavioral standpoint there’s very little difference between a cosplaying ComicCon attendee and a dedicated football fan wearing his team’s jersey to the game.

Fans aren’t extremist enthusiasts, they’re consumers that are defined by a specific set of behaviors. Tapping out those behaviors is what powers Viacom Vantage and it’s data focused insights team.

Click here to read more about the future of media, marketing, and entertainment.