The state of news subscriptions in 5 charts

As publishers grow frustrated with their digital advertising prospects, many of them will look to grow reader revenue next year.

But just as massive scale defines the market for digital advertising, the market for paid digital content in the United States has long seemed a lot smaller, with entrenched problems like low conversion rates and an abundance of free content to compete against.

These five charts paint a picture of a small market that appears to be growing in the U.S.

A small percentage of overall U.S. population paid for digital news last year
A Reuters Institute study discovered that just 16 percent of the U.S. population paid for digital news in the past year, about half of which paid for a recurring subscription. While that percentage positions the U.S. near the top of a list of developed digital markets, it only amounts to about 52 million Americans in total, based on the U.S. Census Bureau’s 2016 estimate that the country’s population was 326 million.

A large percentage of digital-only subscribers are new
The Reuters figures omit one big storyline in digital publishing: the Trump bump. A big chunk of U.S. digital news subscribers have only had their subscriptions for a few months, according to research conducted by the Media Insight Project, a joint venture between the American Press Institute and the AP-NORC Center for Public Affairs. This growth is a sign that publishers’ recent emphasis on paid products is resonating with at least some of their readers.

While Donald Trump’s election fueled a huge spike in digital subscriptions at the beginning of the year, its effects are wearing off. 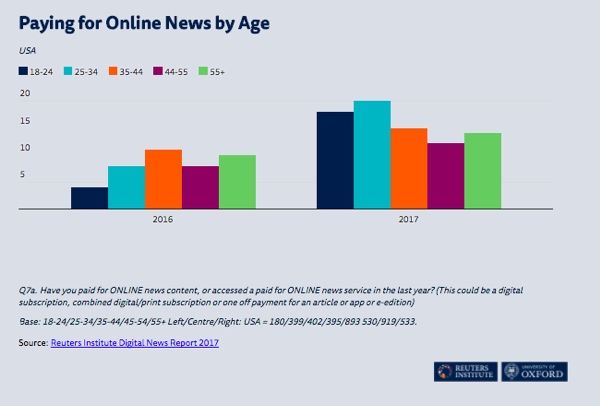 Many pay for coverage of an important topic
Instead, the shift in the previous chart could be taken to mean that people will pay for news, provided they feel the information provided is important and useful to them.

The Media Insights Project found that good coverage of a relevant topic was the top motivating factor for over 40 percent of paying American news consumers, topping factors including hitting a paywall and friends and family subscribing.

A majority feel the price is right
Though some publishers feel they have work to do to figure out the pricing and packaging of their paid offerings, it appears not everybody will have to consider dropping the price. The Media Insights Project found that nearly half of digital news subscribers believe the cost of their subscriptions is “very good value.” In fact, a higher proportion of digital subscribers feel that way than print subscribers do.