Publisher attitudes toward platforms, in 4 charts

The tussle between publishers and platforms shows little sign of abating. Publishers want the reach that platforms afford and a fair reward for filling them with content. On top of this, publishers increasingly want the platforms to take more responsibility for their role in hosting inappropriate content.

Here are four charts on the state of publisher attitudes toward platforms.

Google leads while Facebook falters
Forty-four percent of publishers are more worried about the growth and power of platforms now compared to last year, while just 7 percent are less worried, according to Reuters Institute’s latest Digital News Project report.

The report found that out of all platforms, publishers are the most positive about their relationship with Google, as the below chart illustrates. (A score of three or above indicates a positive view.)

The not-so-surprising finding from the report is that sentiment about Facebook has worsened. The platform has faced struggles that have affected its relationship with publishers, such as its role in spreading fake news, lack of monetization opportunities and changes to referral traffic. Google, meanwhile, has proven itself to be more of a friend to publishers, partly because of Google’s and Facebook’s divergent business models: Publishers’ interests are more in line with Google’s interest in sharing information than with Facebook, a closed social network that earns revenue through advertising. Facebook’s Journalism Project is trying to address publisher’s needs, but with mixed results.

Publishers have griped about the lack of responsiveness from platforms, transparency in audience data and upcoming projects, overall business alignment and, most important, monetization opportunities.

“The underlying discontent is platforms have too much power, and publishers don’t get the fair financial reward,” said Nic Newman, research associate at the Reuters Institute for the Study of Journalism.

Snapchat offers the lowest returns
Publishers struggle to keep up with platforms’ products, especially those that have yet to prove financially viable. Snapchat in particular has required a lot of legwork, with publishers staffing teams to meet content demands without much proven return on investment. 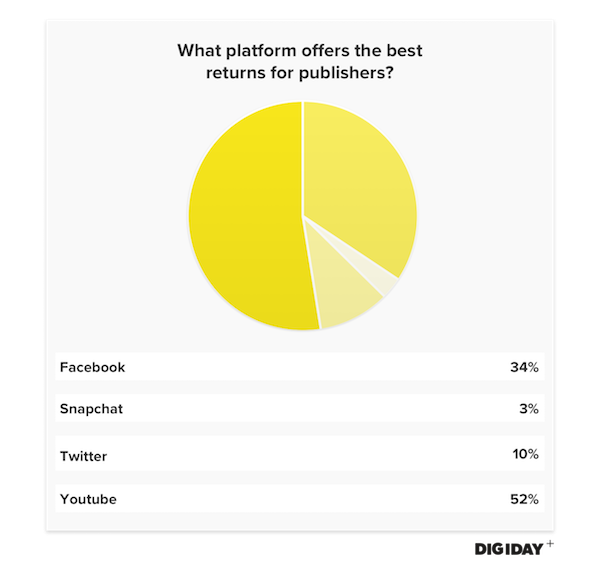 Publishers eye alternative revenue streams
With the concerns about platforms’ power, the need for publishers to diversify their revenue streams is more pronounced. Nearly half (44 percent) of respondents see subscriptions as a very important source of digital revenue in 2018, while both display advertising and branded content were viewed as important revenue sources by 40 percent, according to the same Reuters Institute report, (in the chart below, orange columns represent reader payment options).