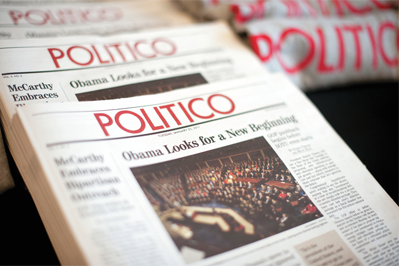 For a new media company, Politico is about to do something decidedly old school.

On Wednesday, the company announced it is putting out a magazine, simply titled “Politico Magazine.” The first issue goes out on November 15, though Politico is releasing the content online the day before.

“This is something we’ve had in the works for the last six months from an editorial perspective to add coverage to what we offer,” said Jim VandeHei, the company’s new CEO. “We do great stuff in the moment, of the day, but didn’t have a great apparatus for telling longer stories. The magazine goes deeper — it’s additive. ”

In a recent interview with Digiday, VandeHei downplayed the value of traffic. Starting a magazine devoted to long form content seems to underscore VandeHei’s belief that if the publication produces quality content, readership and advertising will naturally follow.

The magazine, unlike Politico’s breezy daily content, will be devoted to long form journalism, offering a more expansive and nuanced view of government and politics. It will be published in print every two months, but will post content the dedicated magazine site daily. Like its tabloid sibling, there’s a capped circulation of 40,000 and it will be free.

It’s being headed up by former Foreign Policy editor Susan Glasser, who joined Politico in June. Bank of America is the launch sponsor for print and has exclusivity on the website until the end of the year. Other advertisers in print include Chevron and Coca-Cola.

Politico will be selling advertising for the magazine both individually and as part of a larger package, according VandeHei.

“The magazine allows us, when dealing with larger advertisers, to show more creativity in what we offer,” VandeHei said Wednesday. “Advertisers want to be around certain types of content that people will spend time with. No one wants a standard banner ad. They want a package, something that allows the message to go through multiple avenues — events, stories, ads in morning news letters.”

As for the magazine’s site, VandeHei said that it will follow the less-is-more approach to design that other magazines have taken recently.

“This is the trend where media is heading,” VandeHei said. “Media overreacted for five or six years. In trying to see what works, they made a cluttered environment and devalued environment for the reader and advertiser. What we’re pushing toward is simplicity. The advertiser wants their message to be seen. The magazine in print and in digital gives you advantage around that.”