How the L.A. Times is redesigning for the mobile Web 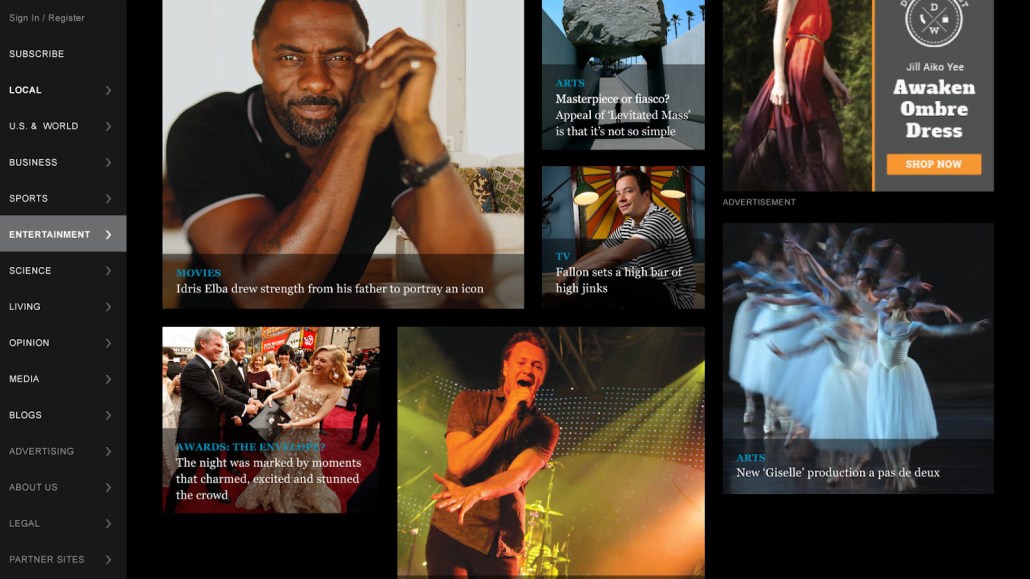 Newspapers lag far behind in the share of time spent on mobile devices. That’s a reality the Los Angeles Times is hoping to counter when it relaunches its site early Tuesday morning with mobile users top of mind.

“We know that there are readers who are coming to us increasingly on mobile,” said Emily Smith, svp of digital for the Times. “We’ve not yet reached the turning point where they are the majority, but that day will come soon. So we are absolutely getting ready for that moment. We knew that we had to rethink the experience on a mobile screen. We also knew we had to future-proof our platform, because we wanted to be available on all the new devices, regardless of what screen sites are coming out.”

The Times is part of Tribune Co., which is preparing to spin off its eight newspapers as an independent company under CEO Jack Griffin later this year. Newspapers face a challenging operating environment, so moves like the site relaunch are likely to be closely watched as a model for the company’s other dailies, including the Chicago Tribune and Baltimore Sun.

Latimes.com, which was designed with help from Code and Theory, will be fully responsive when it goes live after midnight on May 6 — making it the latest publisher in the industry to pay more than lip service to being “mobile first.”

With people increasingly coming straight to articles through social sharing, the Times realized it needed to make article pages the new home page. So at the end of articles, readers will be given recommendations for content elsewhere on the site. That’s pretty standard, but readers also can view that content by just continuing to scroll without going to a new page, doing away with endless clicking.

A key feature is the visual browse, which lets readers search content by displaying stories by section in an image-based way. The feature reflects the visual nature of the way people are consuming news and content on mobiles and tablets.

Finally, the Times is trying to make it easier for people to share stories. A third, notable feature is the Sharelines. They’re prewritten summaries of articles that lie below each article. So if a reader wants to share an article on Facebook or Twitter, the tweet is written for them. Not bad — readers can sound intelligent without even reading the article.