Programmatic buying has given advertisers a simple and cost-effective way to place online ads in front of millions of consumers, but it has come at a cost. Advertisers, once happy to purchase low-cost inventory, increasingly risk backlash from consumers if their ads appear alongside extremist content, fake news and politically risky sites.

Despite increased brand-safety concerns in both Europe and the U.S., publishers in Europe say safety concerns haven’t made it harder for them to monetize quality journalism, according to recent Digiday surveys. Digiday surveyed 133 publisher executives total at the Digiday Publishing Summit in Vail, Colorado, last month and the Digiday Publishing Summit Europe in Monaco in February. A key finding: Half of these publishers believe brand-safety concerns haven’t affected their ability to deliver ads against their content, while just 20 percent think these concerns have made it harder. 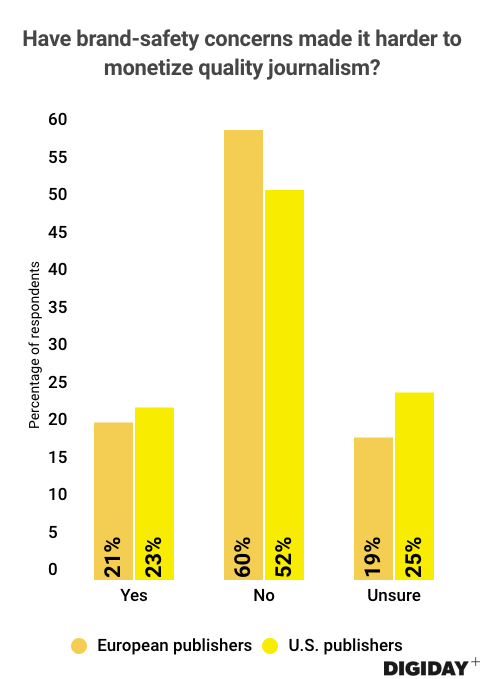 The publishers that think brand-safety concerns could harm their bottom lines are justified in their belief. Beyond pulling ads from sites like Breitbart, brands have gone so far as to refrain from advertising on mainstream publishers’ sites like Fox News.

For U.S. publishers, President Donald Trump — who is hard to avoid covering — poses a challenge. Although stories featuring Trump perform well in terms of pageviews, many advertisers shy away from Trump content. In fact, a prior Digiday study found that 76 percent of brand marketers attempt to avoid Trump entirely.

Brand-safety concerns have also affected European publishers. Most major U.K. newspapers had ads pulled from their sites after some brands found their ads running next to inappropriate videos on YouTube. While some advertisers just requested their ads not appear adjacent to stories referring to the scandal, this situation highlights the issues publishers may face.

Publishers have also made adjustments to try to mitigate advertisers’ brand-safety fears. U.K. publisher Ladbible, for example, started rating the maturity level of its content to help advertisers choose the content they want to advertise against. Vice, meanwhile, developed a tool in partnership with Grapeshot that lets brands avoid advertising next to certain words on Vice’s site.

European countries are working hard to stamp out fake news, which could help ease advertisers’ worries about allowing ads to appear next to politically charged content. Germany enacted laws that clamp down on companies that propagate fake news. European publishers, including the BBC, Bloomberg and Le Monde, also formed a coalition that attempts to debunk fake news.

Of course, ads aren’t the only way publishers can make money. Subscriptions are a steadily growing revenue stream for many publishers, including the Guardian, the Financial Times, The Spectator, and The New York Times.