“The minute that Facebook made this announcement [in January that it would deprioritize publishers’ organic content], our views split in half,” said Cyrus Ghahremani, head of live programming at Super Deluxe.

Despite that decline, Super Deluxe plans to do more with Facebook Live. By the end of 2018, it plans to produce one brand-sponsored live video every week, Ghahremani said. That’s because while Super Deluxe’s live viewership has fallen, its engagement rates have risen, and Facebook, along with brands, is prioritizing engagement.

“Generally speaking, engagements mean a lot more than views, especially with different standards of what counts as a view,” said Gabe Gordon, managing partner at Reach Agency. “Someone interacting or engaging with a piece of content is always going to mean more. If you’re driving people to purchase or click on something, any form of engagement is always going to be valued over reaching someone passively.”

Still, many publishers prize views and the ad revenue they can reap from those views. So it’s no surprise that some publishers have cooled on the format after Facebook stopped paying them subsidies for live video.

The share of top U.S. publishers using Facebook Live in a given month has waned since peaking in November 2016, though the majority of them still use the format, according to data from Socialbakers. The social marketing firm examined the 1,000 most-followed U.S. publisher accounts on Facebook and tracked how many had aired at least one live video on Facebook for each month from January 2016 through January 2018.

Based on that data, Facebook Live’s popularity among publishers has receded, but not to the point of a full-blown retreat. In January 2018, 52 percent of the examined U.S. publishers aired a Facebook Live broadcast, down from a high of 63 percent in November 2016. Similarly, the total number of monthly live videos these publishers posted is down from its peak of more than 21,000 in September 2017, but is still trending up. 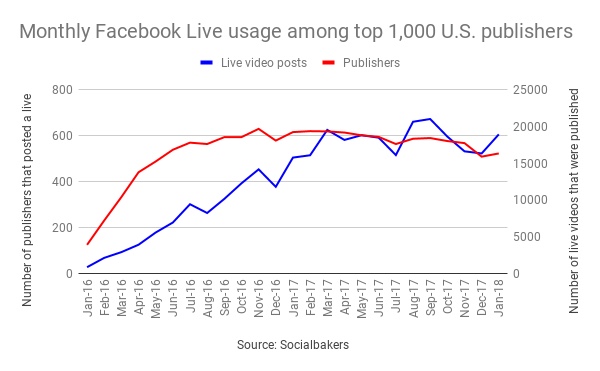 “When [the money from Facebook] got cut off and also when publishers realized they needed whole staffs to go live, I feel like they were like, ‘If we’re not good at this and it’s not really helping on the revenue side or scaling our audience that much, we don’t need to do it as much,’” said Shira Lazar, co-founder of digital video studio What’s Trending.

Like Super Deluxe, Lazar is sticking with Facebook Live. She hosts a daily show on Facebook called “Circa Pop Live” that her company produces and is backed by Sinclair Broadcast Group. The TV broadcaster’s backing has helped Lazar to navigate Facebook’s seemingly ever-shifting emphasis on live video. In addition to getting paid by Sinclair to produce the show and syndicate clips across the media company’s properties, she works with Sinclair to find brands to sponsor the show, which averages 50,000 viewers per airing.

Live video on Facebook could see a renaissance following the company’s recent news-feed algorithm change. At the same time as Facebook said it would de-emphasize publishers’ and brands’ organic posts in people’s feeds, it held out hope for companies producing live videos.

“Page posts that generate conversation between people will show higher in news feed. For example, live videos often lead to discussion among viewers on Facebook — in fact, live videos on average get six times as many interactions as regular videos,” wrote Adam Mosseri, Facebook’s head of news feed, in a company blog post.

Stats from Socialbakers appear to back that implication. Live videos reach twice as many people and receive 25 percent more engagements than native videos on Facebook, according to Moses Velasco, Socialbakers’ chief of strategy.

If Facebook’s algorithm does reward live videos that elicit comments, shares and likes, then Super Deluxe may stand to recoup the views it has lost. Not only that, but those views that remain views may be more valuable if they’re more engaging.

“The engagement rates and watch times were staying the same while the views dropped. And since then, those have been rising while the views stayed the same,” said Ghahremani. “So I think there is a shift happening where the quality of the views is getting better.”