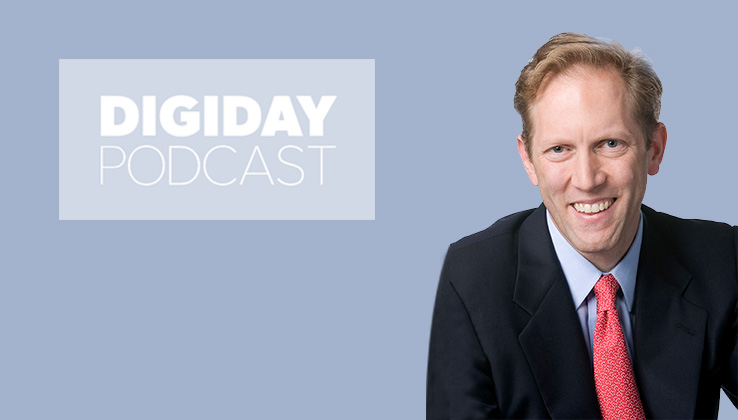 On this week’s Digiday Podcast, CEO and co-founder of Business Insider Henry Blodget said the publisher, which has over 10 million followers across social media platforms, is not trying to grow reach anymore.

“We have already this amazing audience of the next generation of executives. We don’t want to expand that into a mass consumer market people don’t care about,” said Blodget. “So Business Insider can now consider deepening its engagement within the reach.”

As the publisher’s focus shifts to deepened engagement and frequency, it faces questions: whether an ad-driven model is better than a subscription model, how to monetize social and web video and how to approach the ever-growing need for video on platforms.

Blodget answers these questions and more in the episode. Below are highlights from the conversation, edited for clarity.

Platforms will be the digital age’s cable services
“A lot of commentary with respect to the platforms is just completely head-in-the-sand wrong. What is evolving is very similar to cable networks and cable providers. You need both. In digital, you have these great platforms — Netflix, Facebook, YouTube. Now, they need great stories, information and content to go on top of that. Where the mistake is that companies think Facebook will pay them so much money that it will cover their costs of making television or printing a newspaper or magazine. That is never going to happen, and that is not Facebook’s responsibility.”

Video monetization is in the experimentation phase
“Digital video will evolve its own monetization unit or pattern the same way television and text online did. [Ads on TV] evolved to mini stories that just last 15-30 seconds. You can tell stories around your brand and product, but there are also units evolving. The one unit that has a lot of promise is the very short advertisement — 6-second pre-roll or mid-roll on Facebook. In digital, 15-30 seconds is an eternity. So you can do a huge amount in 6 seconds.”

Both the ad-driven and subscription model work
“You can do slightly different things with each, and our perspective is we want to have both. Business Insider grew to be a broad publication; we saw an opportunity to do in-depth reporting and analysis in particular industries where people would be happy to pay for it because it would help them do their jobs better. Advertising [business] will remain a big part of Business Insider.”

Platforms will evolve to become conscientious business giants
“They’re [Facebook and Google] going through what most hyper-successful companies go through at some point. It was Microsoft, early in the 1990s, [when] it was a little, inspiring startup. By the end of the 1990s, they’re this huge behemoth gorilla. What Microsoft did in that period was change from being this scrappy, no-holds-barred startup culture to saying, ‘Actually, we’re incumbent; we have to play fair. The rest of the world has to do well.’ That’s what you’re seeing with Google, Facebook and others. What happened in the election really stung them [Facebook]. They have put enormous resources into figuring out how can we be a great news, journalism and entertainment distributor for the future. They now have to persuade the government authority and others that they have everybody’s best interests at heart.”