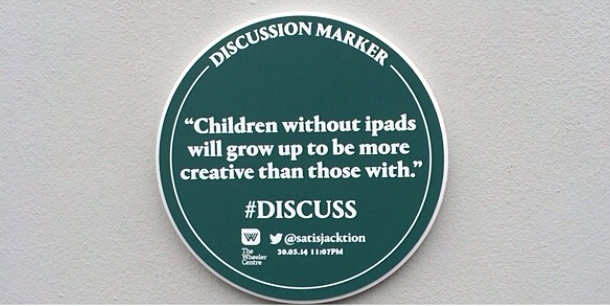 Let’s face it, for all of Twitter’s potential as the world’s real-time water cooler, much of what passes for conversation there is fairly shallow — and disappears as people move onto the next outrage or Internet injustice.

Australian arts organization The Wheeler Centre has undertaken a clever campaign to highlight the need for more in-depth conversation of important, and even not-so-important, topics. The group’s agency, Clemenger BBDO, will take 100 tweets, on topics ranging from child rearing (“Children without iPads will grow up more creative than those with.”) to fruit (“Pineapple. Neither pine nor apple.”) submitted on the Wheeler site with the #discuss hashtag. The tweets will then be posted on plaques throughout Melbourne as “discussion markers.” So far, the agency has put up 32 around the city.

The tweets are strategically placed. For instance, this was posted in front of a politician’s office. 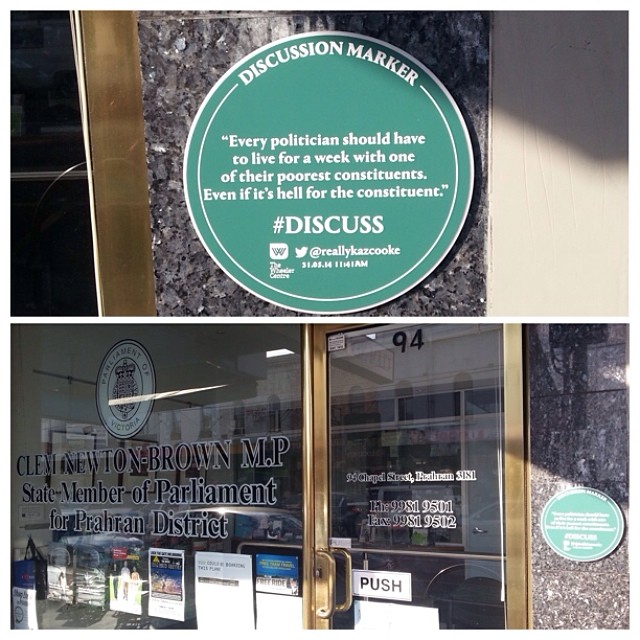 “We were conscious of the shallow, quippy nature of Twitter conversation,” said Berlin Abraham, senior account manager at Clemenger BBDO. “There’s no avoiding it. We wanted to give people a forum to see what they’d do with it. Post zingers to try for a laugh, or post genuine topics that they want to have a meaningful discussion about. We’re seeing a bit of both, and a heartening (and somewhat surprising) amount of the latter.”

The #Discuss effort will post 10-15 plaques a day, with the final expected to go up June 8. Clemenger BBDO is taking photos of the immortalized tweets and sending them back to the creators as photographs.

The campaign is something of an update of the well-received Nike Chalkbot, which took online messages supporting those fighting cancer and turned them into chalk-written messages on the streets of Tour de France stages. Authors of the messages would receive photos of their messages from the roads of France too.

#Discuss is an interesting reminder that what passes for discussion in the online world is often little more than a series of disjointed monologues and ad hominem attacks by those emboldened by the ease (and anonymity) of hitting the “tweet” button.

“It’s easier to track the online conversation but we’re hearing anecdotally that people are stopping and talking at the actual plaques,” Abraham said. “The most gratifying thing is when people are interacting with it in real life and bringing it back to the digital realm.”