Welcome to the ground floor: street-level offices for a post-pandemic world 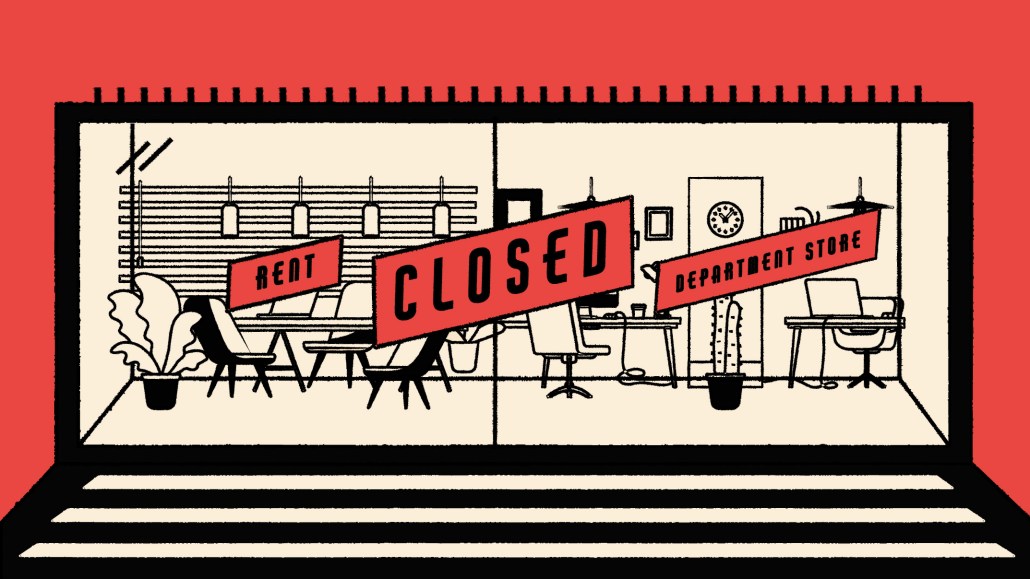 Having outgrown its old headquarters, Chicago ad agency SRW was over the moon about moving into its brand new space last March — having no idea the world was about to be turned upside down by the pandemic.

SRW co-founder Kate Weidner and her partners had looked at real estate across Chicago’s trendy Haymarket District. They wanted an office not only with the latest smart technology and room to grow but one with character, a space that would foster the kind of entrepreneurism and creativity the firm was founded on and that is instilled in so many of its clients’ brands. But in looking at potential offices, there was always some downside.

Then one day, her partner Charlie Stone happened across an abandoned street-level space — a former meatpacking plant — with a sign that read “For Rent” in the window. They’d found their new home.

As a former meat-packing facility, the space had the kind of eclectic features Weidner and her partners dreamt about. (The boardroom used to be a giant freezer, while the loading dock was reimagined as a bar.) But after Covid-19 struck, being on the ground floor took on a whole new significance. “We didn’t realize at the time how important it would become, but so many of our friends and colleagues in skyscrapers were not going into the office. We were lucky to have a space, once restrictions were eased, that we could go straight into, with our own entrance,” said Weidner, whose firm specializes in natural health and wellness brands with clients including Mondelez and Procter & Gamble.

The inherent safety of the space (plenty of room for distancing, no crowded elevators) made employees and visitors alike feel at ease — a tall order in these times.

Ground-floor offices could be springing up in cities everywhere as companies seek to become more accessible and social distancing-friendly. That so many street-level spaces were once home to large commercial tenants like department stores and packaging facilities, each with a cavernous square footage, only enhances their appeal. And with so many storefronts standing empty, especially in the wake of the pandemic, street-level offices could be a logical solution to the urban blight that comes with shuttered shops.

It’s a trend that’s definitely on the radar of Jonathan Wasserstrum, co-founder and CEO of SquareFoot, a New York-based commercial real estate company that has worked with companies like Instacart and Casper to find their spaces. Giving up that bird’s-eye perch of midtown Manhattan, or London’s financial district or the Sydney Harbour Bridge, may not be such a sacrifice when one considers the benefits. “You keep your home safe. Your office has shared rules and regulations. If a company can eliminate some of those x-factors — especially if people have vocalized them in their searches for new office space — it makes sense to try to meet those needs,” said Wasserstrum.

The pandemic has changed how we think of our workspaces, and with the coronavirus vaccines now rolling out and a return to normalcy on the horizon — albeit a battle-weary normalcy — companies have already fast-forwarded to envisioning the office of the future. Wasserstrum believes the difficult events of recent months will ultimately have a positive impact on workspaces, including those on the ground floor.

Flexibility is key, as he sees it — including flexibility by commercial landlords, who will be more willing to negotiate with tenants on terms like the cost and length of leases and the ways spaces are used. In recent years, building owners have offered such amenities as gyms and cafes to their tenants, he added, but those will likely be scaled back in favor of basics like cleanliness and smart technology. And the street level — home to so many massive, empty and flexible spaces — could become a coveted amenity all its own.

The rise in demand for flexible office space could also spell a future for repurposed storefronts. Even before Covid-19, flex space was projected to become 30% of all office real estate by 2030, even though it currently represents just 2% of all commercial offices, according to Jeremy Bernard, CEO North America of the workspace tech firm Essensys, which works with large commercial real estate companies like New York-based Tishman Speyer and Cushman & Wakefield, headquartered in Chicago.

Bernard believes the most profound change in the workspace over the past year has been the power shift from corporations dictating how office space is designed and managed to a model that recognizes that the individual needs of each worker must be at the center of the office experience. “It is imperative for our team to tackle the friction points that landlords face in delivering flexible workspace so that the employees can return to work with a sense of optimism, trust and confidence as the vaccines roll out,” he said.

SRW’s Weidner believes that flexibility is especially important in the world of advertising and branding.

“In a creative environment and one where relationships are everything, it’s going to be important for agencies to figure out how to maintain some kind of human connection while maintaining safety for everyone,” she said. “That means more ownership and more control of your space.”

It’s hard to replicate workplace culture virtually. Does that worry you?

The media industry is normally so social, especially for people entering their careers, and without that it’s hard. It’s the personal connection — making people feel connected to their companies, work and colleagues — and it’s harder to do when you don’t spend time together and remember you like each other. It’s also hard when the fun is sucked out of the world. At agencies, people have always had late hours, it’s always been a slog. But [before] there was that social and glamorous side, it was a work-hard play- hard mentality, whereas now it’s just work hard. So we’re very off balance and don’t have as many reliefs for the stresses of work. But culture isn’t purely social, it’s also behavioral: a level of standards and values for conduct and how the business should operate, manage and communicate. The social aspect is the part we are focusing on as we’re all missing the fun. But actually, there is still a ton of work we can do on the behavioral side even remotely. And mental health, diversity and inclusion can all be part of that.

Will the loss of much of what made workplace culture special at agencies affect talent recruitment and retention?

We’ll always have new talent coming in but I do think for that entry-level layer you need to create a strong connection much earlier than we thought to previously and that’s the challenge in the virtual joining of a company. A lot of early training is on-the-job training and shadowing, being shown how to set up and pull a campaign for example. Doing it over a screen share, or watching a video — which is what we have to do now — isn’t the same because so much of that learning and interaction and being able to ask questions happens in the moment when people are shadowing. The osmosis of being together in person is missing. It’s hard to pull that off in the same way virtually.

How have you addressed the increased need for mental health support?

We launched our Thrive Day last July, where everyone gets to clear their meetings and video conferences for the last Thursday of every month, which is difficult to do when you work in a client-service industry. We give people suggestions on training they can take and it’s up to their individual preferences what they choose to do but it’s a great day to clear your mind, think strategically about the big picture and enable people to feel more in control of their day, since our new normal is draining, and remote work can be intense. You’re in back-to-back calls and there is less time for strategic thinking and innovation. As an industry we need to do more to connect with employees on a non-business level, whether it is extending work culture or finding opportunities for people to have mentorship and sponsorship.

— A total 602 journalists have died globally from Covid-19 so far, either as a result of contracting the virus while on the job or in their communities. [Source: Press Emblem Campaign.] Mental health for many journalists covering the pandemic has also taken a huge knock.

— Employers are investing more in candidates that can display traits such as emotional intelligence, openness to change and collaborative skills to help build a stronger work culture. As such, 48% of 322 senior execs polled said critical thinking is the most sought-after soft skill, followed by complex problem solving at 33% and emotional intelligence at 29%. [Source: Aquent, recruitment firm for marketing and creative talent.]

— The switch to remote working over the last year has brought with it a wealth of challenges, once of which has been managing to stand out on video calls. For introverts, it’s even harder. We spoke to an occupational psychologist to find out why working in an entirely online environment has been harder for introverts, and what they can do to help them get noticed by their bosses and ensure they don’t miss out on being selected for exciting new projects.

— Last year also set a new precedent for negotiating business deals over Zoom. Some have argued that the new way of communicating has led to a decline in new clients. “… it’s hard to build chemistry with a potential client over Zoom and it can be awkward presenting a concept remotely but you can’t help wondering whether clients are using these reviews as opportunities to squeeze a better deal from their current agency,” a senior agency exec told us.

— 2020 is the year agency leadership got more personal, more compassionate, more human. With everyone’s lives turned upside-down, CEOs have had little choice but to shake up the work environment. “Empathy as a core requirement for leaders is here to stay and will be an essential ingredient to our societal and economic reemergence in 2021,” said Eric Moore, CEO of IPG shop Elephant.

This newsletter briefing is edited by Jessica Davies.