‘The schoolyard has been replaced by the office’: The bullying problem at agencies 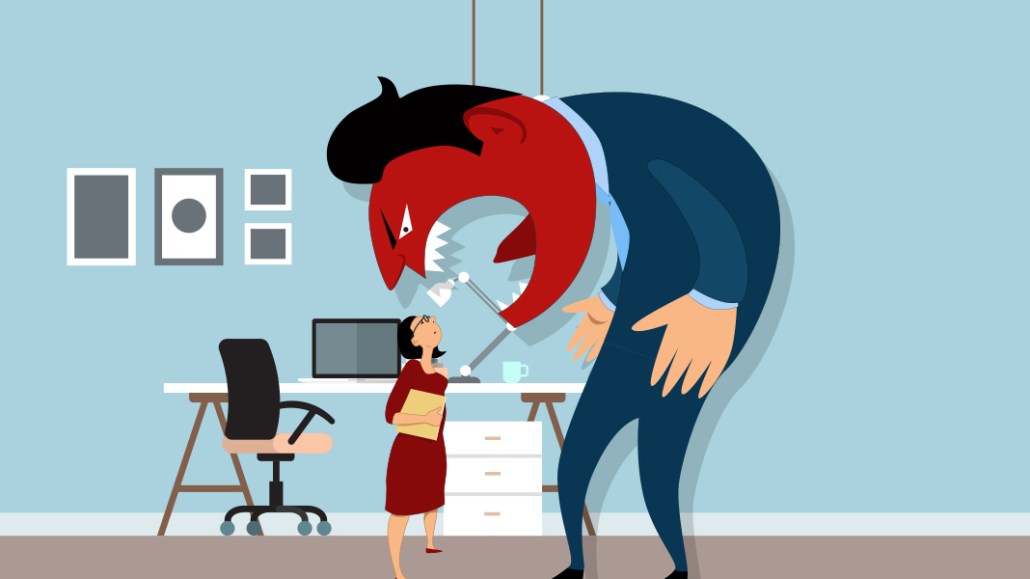 A year ago, a team of creatives came to a head of talent at a major agency saying that they felt like their boss, a creative, was creating a hostile work environment. Pressed for details, this group said that they felt there was “excessive” feedback that went beyond criticism, which they dubbed as “bullying.” The head of talent decided to make some adjustments and move the team to a different account.

A few months later, a handful of the same people came back, claiming similar issues with their new boss.

“I didn’t know what to do,” said this head of talent. “In a way, I felt like I was now unable to do my job. But I had to take it seriously. Because we have to take all of this very seriously now.”

As harassment takes center stage in the national conversation, there is another part of modern work that seems to be gaining more attention: workplace bullying.

Last week, the agency trade group 4A’s launched an “enlightened workplace” certification program. Driven mostly by the current conversation around sexual harassment, the program also aims to support agencies to eliminate, among other things, bullying and intimidation in the workplace. The program will provide self-evaluation tools and training for execs and HR leaders on covering difficult conversations and issues with power, status, gender and race relations.

Over in the U.K., NABS, an employee support organization for advertising and media has an “advice” line that, according to internal figures, has seen a 25 percent uptick in people calling about work bullying.

“I firmly believe there are two camps of creatives,” said the head of talent. “There are ones who love and appreciate feedback and there are others who can’t stand that anything they’re doing is being judged. In this case, I think it was mostly the latter. If someone is calling you an ‘idiot,’ of course it’s bullying. But otherwise, we are getting to the point where we’re just teaching people to be victims.”

It’s tough to make the distinction between bullying and harassment. For many, they’re part of the same bucket. But bullying can be tougher to identify, and also harder to solve for. Harassment is targeted, based on attributes like sexual orientation, gender or race. But bullying isn’t. Secondly, harassment is illegal, which means in many cases those being harassed have the option to go to an external agency — governmental, for example. Bullying is a little more of a gray area, and victims often find HR is the only place to turn. And there seem to be certain things unique and peculiar to agencies that make bullying more commonplace.

Bullying can include excessive name-calling, humiliation beyond feedback when it comes to giving critiques of work or even, in some cases, swearing or using foul language. It can also mean gossip, creating feelings of isolation by banding together against someone else, insults or arbitrary criticism. There are also non-verbal cues like the silent treatment. It can also include stealing credit or plagiarism, something that is common in creative industries, especially at agencies. Unlike in harassment cases, bullies don’t have to be in a position of power.

One agency employee who asked not to be named said that bullying in creatively driven industries often manifests itself through ego. Ego is a critical part of the industry. In an industry fueled by awards, those awards provide very important — and critical — validation that your work is good and is matters. For this employee, she’s often found that she’s talked over or not taken seriously, by both men and women. To her, that comes close to bullying, especially when it’s done simply to make the bully feel more important.

It’s hard to measure creativity, especially in advertising, so the number of awards you get is important. And usually, said this agency employee, those with the most awards tend to be the biggest bullies.

That means there is a lot of internal competition within agencies. “You’re trying to make sure your ideas win and that you’re attached to a winning piece of business,” she said. “So people can get aggressive, especially those at big agencies with those big personalities.”

“The approach we have taken is not a quick solve but one to address the underlying issues that enable these behaviors,” said Keesha Jean-Baptiste, 4A’s svp of talent engagement and inclusion, in a statement. (The 4A’s couldn’t make an executive available for comment on bullying specifically.) While the spotlight has been on sexual harassment, we know racism, ageism, ableism and homophobia are just as pervasive. We need work cultures where everyone is socially conscious, culturally competent and empathetic to one another’s experiences.”

Gerry Graf, chief creative officer and founder at Barton F. Graf, said that rejection is the most common thread in the industry — and especially among creatives. “Ninety percent of a creative’s life is rejection,” he said. Graf said that between having ideas killed by creative partners, creative directors, group creative directors and, eventually, clients, rejection is a common and necessary part of the business.

The issue is to identify bullying — one person’s bullying is often just another person’s candid feedback. “There are instances where someone might feel like their higher-ups don’t like their ideas or think they’re not good and feeling like they’re being bullied if their ideas are being killed,” said one agency employee, who said she often has people mimicking her accent.

Writing in Campaign, Quiet Storm founder Trevor Robinson said that agencies in a way particularly have created structures where “backstabbing” is rewarded, and there is an undercurrent that actually rewards bullying.

Bullying can more readily happen in high-pressure environments — and agencies are one of those. “I often feel I’m only as good as my last piece of work or campaign,” said one junior creative. That means, said this person, that he has to do what he can to advance. For him, that often results in his feeling that he’s being bullied when he’s being rejected.

Another agency employee said bullying is a generational issue. “There’s some degree of, ‘well I put up with it when I was younger’ kind of stuff that I’ve personally had people say to me in my career,” said this person. “Like, it sucked then and it sucks now. And I’m like, ‘well, maybe it doesn’t have to suck.’”

“At the end of the day, programs and announcements and initiatives are great, but it comes down from the top about what is enforced and what is not,” said an executive who is signed on to the 4A’s training program. “Often there is no real action or real consequences to bad behavior. You’re usually just marked as a difficult person.”

Digiday spoke to 10 agency millennials for this story to ask if they’d ever felt bullied at work. All of them requested anonymity. Two female millennials said they felt bullied by other women in a high school, “clique-ish” way. “It’s one thing to give feedback in a blunt way,” said another. “It’s another to get it in an open office environment in front of your colleagues.” One person said that when he went to HR, he was told to talk to the person bullying him directly, which made the situation worse.

“Bullying is definitely present, and it’s in a very high school-like way.” he said. “The schoolyard has been replaced by the office.”