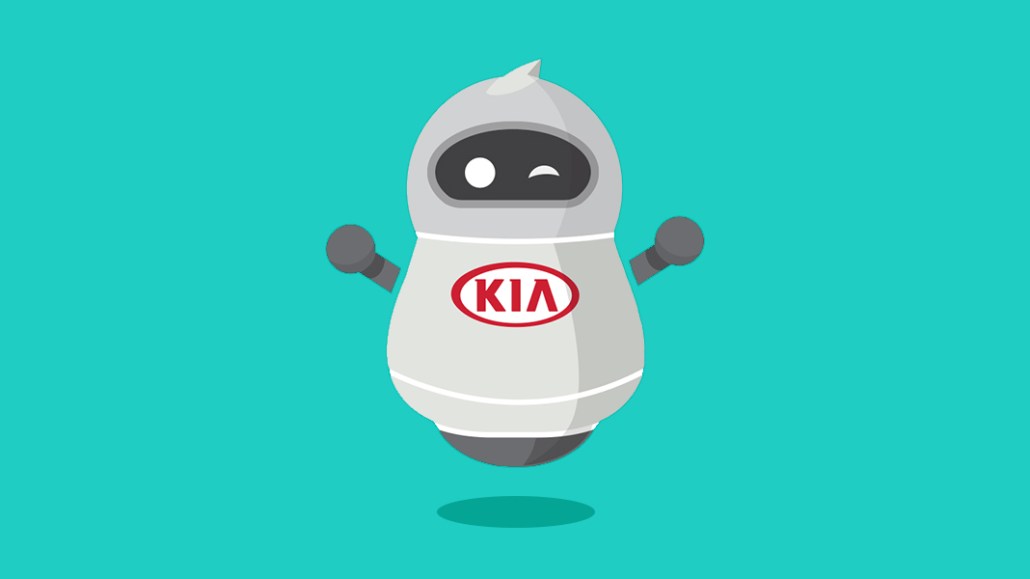 At last count, Kia had more than 800 websites where a customer can ask about buying a car.

In November, to try and simplify the process, Kia launched Kian, a Facebook Messenger and chatbot, in order to have a direct source for all the information that users might search for. In the four months since its launch, Kia has gotten three times more conversions through Kian than through its main website, Kia.com.

The conversion rate through Kian is 21 percent, while conversions through Kia.com are at 7 percent, according to Nathalie Choy, national manager of digital, social and CRM marketing at Kia Motors America.

Customers aren’t shying away from asking their questions. Choy said Kia has seen an increase in engagement, mostly thanks to Kian. Kian has exchanged 600,000 messages, resulting in 50 times more engagement through Messenger, according to Choy.

Choy associates the positive results with the fact that Kian, created by chatbot technology platform CarLabs and mobile agency Ansible, can act as a singular point of contact for whatever customers might need answers for.

“If you look at our site compared to other automotive sites, they are very similar. They showcase the same shopping tools, the same way you can configure your car, all the same information,” she said. “It’s a lot for a consumer to go through because it’s a big purchase for them, so we’re trying to help.”

“Knowing how they behave gives us much more insights than studying website analytics,” said Choy. “When people click on things on our website, we don’t know what they’re thinking. We don’t know that they’re trying to find a specific car in a red color, for example. They are clicking everywhere, and we can only guess what they’re looking at.”

With Kian, if someone types that they’ve lost their keys, the bot will tell them how to get a replacement set and direct them to the parts and services department at their local Kia dealer. If someone types that their brakes are making noise, Kian will explain the cause and direct them to their local Kia dealer. If someone needs roadside assistance, Kian will describe the roadside assistance policy and send them a link to the service. When it comes to making payments, Kian will direct the user to the Kia finance site. Kian also acts as its own search engine and can pull up Kia inventory and compare similar models at competitors.

With artificial intelligence and machine learning, Kia can pull out key insights, which can then be used for retargeting. The chatbot platform allows Kia to overlay machine learning models on top of analytics. This lets the company identify specific cohorts of people who exhibit similar behaviors.

If, for instance, a group of people was using Kian to look at a specific model of a Kia car, say the Kia Stinger, then Kia can re-engage those people with a message asking them if they would like to know when Kia has sales offers for it, according to Brendan Flynn, vp of marketing at CarLabs. Overall, Kia has seen a 24 percent response rate when sending follow-up messages with Kian.

“That’s a huge ability to reach out to customers based on their actual wants,” said Flynn. “They’re not blatant marketing messages. It’s the right message at the right time to the right person.” 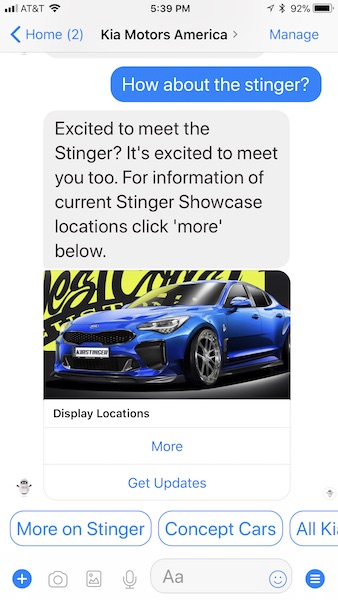 Kia is also saving money with Kian, although Choy wouldn’t reveal specific numbers. “The chatbot allows us to answer in real time and respond 24/7 without us investing in expensive infrastructure to boost up call centers and customer support services,” said Choy.

Kian is not Kia’s first foray into AI and chatbots. The company first tested the space in November 2016, when it launched its NiroBot to accompany its campaign for its Niro Hybrid car, but this version could not search all Kia models. Kia also released a version of NiroBot on Alexa and Google Home this past summer.

Chatbot technology is becoming more important across Kia Motors, said Choy, who said it is an area the company is investing in, although she wouldn’t reveal specific numbers. Kia is advising its company headquarters in Korea about the technology and how it can be implemented across other areas of the business, including Kia’s parks and services, sales, connected car and finance divisions.

Still, it might be a while before the car company builds out its own in-house AI division. “With year-over-year sales being more demanding, we don’t have the budget to start an AI department,” said Choy.