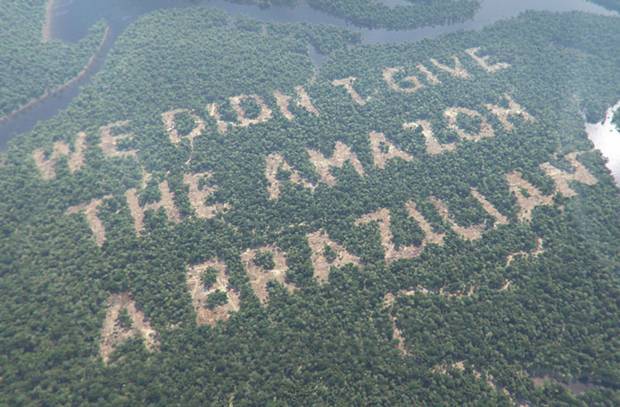 Paddy Power has turned PR mischief into both an art form and a formidable business strategy. Since its formation as a group of 40 small back-street bookmakers in Ireland in 1998, it has established itself as one of the largest betting companies in Europe. Its latest foray into corporate trolling, involving a controversial British politician and the Ryder Cup, is good enough to warrant a step back to admire the work of one of the cheekiest brands on the planet.

Here are five of its most shocking, hilarious and/or impactful stunts, depending on your disposition.

That time Paddy Power pretended that it had given the Amazon Rainforest ‘a Brazilian’
Paddy Power took its passion for sports to a new level when it pretended to carve a good-luck message for England’s World Cup team out of the Amazon Rainforest. The world went nuts. PR specialists and advertising execs turned green with envy. Andy Nairn, the founder of Paddy Power’s agency Lucky Generals, described the furore as “the first time people have called for us to be killed one day, then knighted the next,” after the prank raised awareness of deforestation. Greenpeace even went as far to thank them publicly.

Having Nigel Farage ‘Swing for Europe’ ahead of the Ryder Cup
Paddy Power stuck gold when it successfully teamed up with U.K. Independence Party leader Nigel Farage, a politician currently enjoying an all-time peak in popularity. The result of this ridiculous but hilarious collaboration can be seen below.

In explaining why he made the ad in a column in the Independent, he said: “I’m pleased with the results and I hope the ad makes people laugh. I also hope it makes people realise that just because I hate the EU doesn’t mean I don’t love the continent of Europe and its different cultures, different foods and different traditions.”

Inventing the ‘chav tranquilizer’ to help people enjoy at day at the races
When you’re enjoying a day out watching horse racing, the last thing you want is overzealous, lower-class drunk people ruining the fun — at least according to Paddy Power. Again, the Internet went wild.

Getting Steven Hawking to curb English football fans’ expectations at the World Cup
England fans knew long before the World Cup that their team didn’t stand a chance of winning, but Paddy Power roped in one of the most notable scientists on earth to explain just how slim their chances would be, to save any last minute rush of optimism. Here are the results.

That time someone accidentally sent flirty texts to Paddy Power’s PR person after a night on the town
Sending hungover text messages to the wrong number is often embarrassing enough, but this man’s fortunes couldn’t have gone much worse. After picking up someone’s number incorrectly at a bar the night before, this person sent flirty text messages Paddy Power’s PR rep by mistake. The whole exchange then proceded to be broadcast to its 400,000 Twitter follows. Here’s a Storify of how the hilarity unfolded courtesy of the Mirror.