Marketers continue to chase ‘authenticity,’ but what is it? 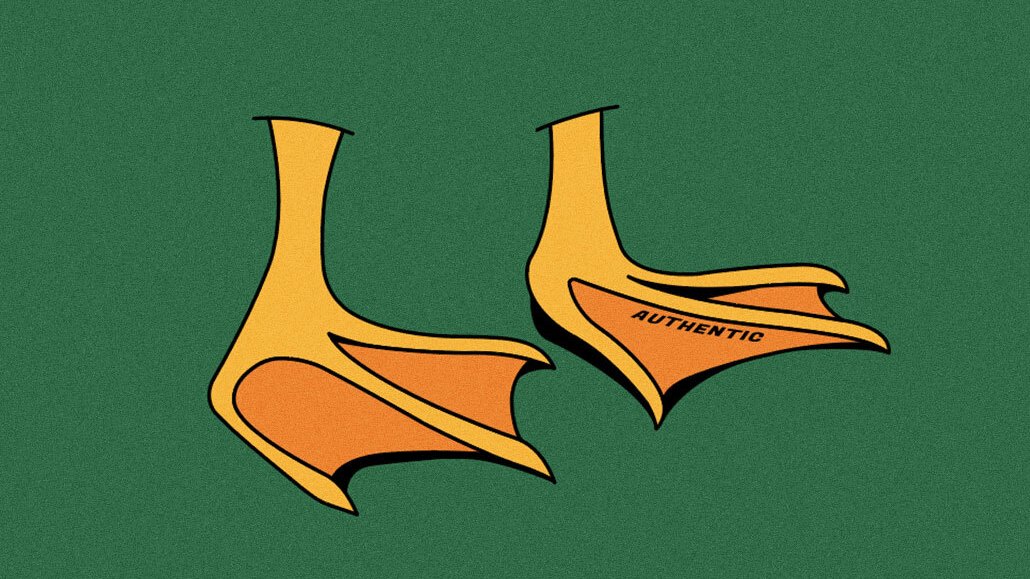 These days, you can’t have a conversation about social media platforms without the word “authentic” coming up.

Whether you’re trying to go after the masses on TikTok, Instagram, Snapchat or YouTube — to name a few — the common theme is that for ads to do well on the platform, they must be “authentic.”

And this isn’t a new conversation either. It’s been a consideration since the dawn of time, or at least since 2013, when Digiday previously questioned what marketers meant with this buzzword.

Now nine years on, marketers are still trying to grasp: what exactly does “authentic” even mean?

Being ‘authentic’ on TikTok

Marketers are scrambling to figure out what works or doesn’t on the platform to appear “authentic.” Get it right, goes the thinking, and the lucrative but illusive Gen Z is more likely to become a fan of the brand. Knowing what that authenticity entails is another question entirely. And as the algorithm has shown — it’s not as simple as turning out a comedy-style skit or dance challenge. It could be someone sharing a personal story, or even a straightforward “Day in the Life” style video.

“The main thing is that it shouldn’t feel out of place on the For You page, it should fit seamlessly into the type of content your audience is already consuming,” said Joanna Hughston, head of marketing at Fanbytes by Brainlabs.

While the agency accepts that not every brand will get this straight away, its execs advise clients to push the boundaries of what they think their brand(s) can and should be doing wherever possible.

“We advise brands to 1) Define what their brand stands for and 2) Look at what their desired audience is engaging with,” said Hughston. “Then find the correlation between the two to help construct a brand personality that fits with TikTok but doesn’t compromise their values.”

That being said, could the likes of Gucci or Prada get away with ad videos of models rolling out of bed with last night’s makeup on and still maintain their premium brand images? Probably not. And more than likely, the marketers there wouldn’t want to.

Yet, Burberry and Porsche have somehow managed to tap into this “authenticity” to create successful ads for the Gen Z crowd. They have sought to reach niche internet subcultures, combining that with the Gen Z nostalgia of toys one minute, and their concern for nature another — all broadcasting it on a global stage.

Successful as these campaigns were, it’s debatable as to whether the authenticity they presented was actually real.

In other words, human beings ultimately want to look good.

“If you have a bunch of people who can see what you’re doing, you want to put on the best show for them. That’s really what social media is,” Amroo told Digiday.

And he’s not wrong.

It’s safe to say the advent of the creator economy has shifted the digital world more than anyone likely could predict five, or even 10 years ago. The prospect of being authentic has by default, had to become more multi-dimensional as more and more stakeholders have become involved. Being authentic is usually always far easier when money and big contracts and several brands or investors aren’t involved or need to present a certain image.

Speaking about creating content per platform, Evan Horowitz, co-founder and CEO of Movers+Shakers believes marketers have to be focused on creating content that’s native for each platform, because that’s where the team sees a huge difference in performance.

Translation: native, branded content is the content that matches the look, feel and function of the media format where they sit. They don’t stick out, they fit “natively” and seamlessly on the app. Crafting that distinct look and feel, of course, is easier said than done — as has proven time and again on social media.

On Instagram, creators started by using in-app filters. Over time, they turned to taking shots offline using high spec DSLRs and subsequently released their own filter presets. These products, which undoubtedly formed another revenue stream for those influencers, gave everyday people the same tools to produce their own aesthetically pleasing, polished pictures.

And while it makes sense that people do naturally get better at creating on these platforms over time, surely there comes a point where authenticity simply no longer exists?

Come to think of it, it’s more likely the definition of it changes. It happened on YouTube: when it launched, being authentic was about influencers’ honest opinions of products they reviewed. Nowadays, that’s shifted so influencers must be able to be honest about a brand, but also genuinely like or trust the brand too.

Facebook started life as a platform to stay in touch with friends and keep them up-to-date through status updates. It’s the same with Instagram: initially it was about showcasing nights out with your friendship circle, nowadays it’s shifted to become an aspirational platform where influencers show the luxury holiday destinations, top notch recipes and so on.

In short, being authentic becomes a catch-all term for the best, most engaging content.

“Anytime a new platform launches, people run to it and say this is the place to be authentic now,” said Jess Phillips, founder & CEO of The Social Standard.

It’s a repetitive cycle, when any new platform arrives. What is clear is the industry loves a buzzword, and unfortunately while they might be key at the time, their overuse can cause them to become somewhat meaningless, or to have to evolve depending on who and what the conversation is at any given time.

What marketers need to decide is what platforms are truly worth their time (and ad spend), before jumping on every “authentic” bandwagon going.