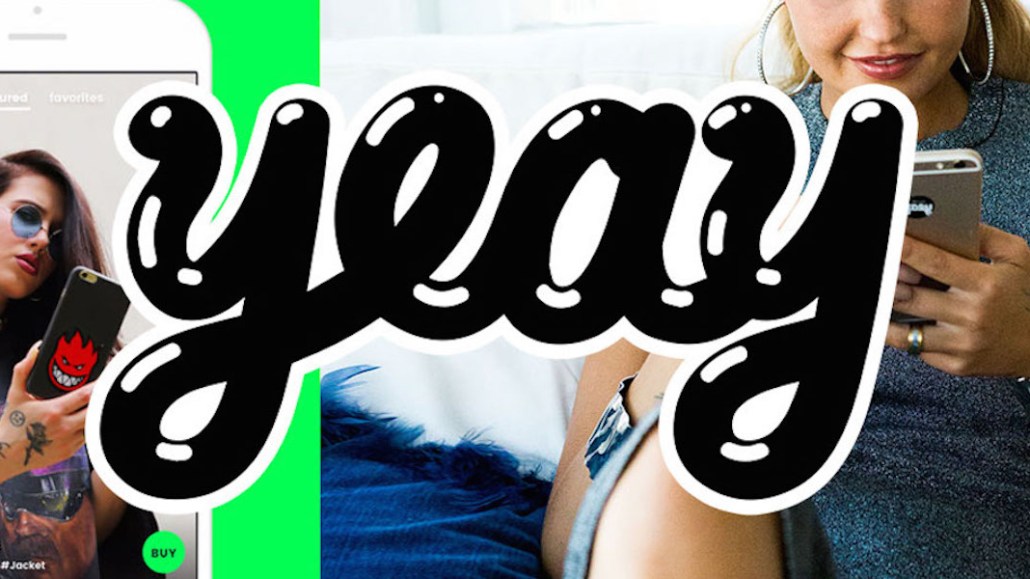 When Melanie Mohr created the mobile shopping platform Yeay, she saw an opportunity to capitalize by merging two growing factors: the spending power of Gen Z and the proliferation of video.

Similar to Musical.ly, which features user-generated lip-syncing videos, Yeay (pronounced “yay”) allows users to post short video clips shared through an app interface. The difference is that individuals use videos to sell products — anything from a slightly used pair of Yeezys to a pair of Gap jeans. The model is similar to Poshmark, but rather than photos, each listing is a video that was shot, styled and edited by another seller.

Mohr describes Yeay, which was officially launched earlier this year after completing a beta stage in January, as a combination of eBay and Snapchat. However, Yeay content is not ephemeral, but lives on the app until a purchase is made. Items can be bought directly through the app, and transactions are powered by PayPal.

“[Gen Z and millennials] are so good at content creation, they are, in a way, better marketers than any brand or advertisement agency can be,” she said. “[The videos] are not advertisements, they’sa like recommendations from a friend. The best scenario is it’s not only informative, but creative and fun to watch. It’s about figuring out the right visual and storytelling approach.”

Within a year of launching, the platform claims it has 650,000 global users in 160 countries and 5 million video views. Now, it’s starting to set its sights on brand partners, particularly companies like Adidas, Nike and Supreme that are consistently popular on Yeay. Though Mohr and her team are working out what a collaboration would look like in practice, the aim is for major retailers to produce their own short videos and sell product through the platform, the way streetwear brands have taken to emerging platforms like Shopify’s Frenzy app to sell goods.

At the moment, Yeay is not collecting a cut of sales for each purchase, though it plans to implement a commission model in 2018. While Mohr wouldn’t disclose what percentage of sales Yeay would keep, she said it would be on “the lower end” of industry averages.

Yeay makes money on video advertisements by brands. Eventually Mohr hopes to develop some type of subscription-based resource for companies, using the data and insights her team have already been able to glean, based on searches and purchases alone. According to Mohr, Yeay was able to spot that the now ubiquitous fidget spinner was going to become a trend before it hit most of the U.S. markets.

Yeay is also looking to forge brand partnerships through a forthcoming ambassador feature, which enables users to collaborate with companies and create videos to shill their products. In return, users take home a portion of the sales, much like a traditional influencer network. Mohr declined to disclose which brands are participating. Since users are given autonomy over their content — with some parameters — to stylize it as they see fit, Mohr said the genuine nature of the videos will be advantageous to brands keen to tap the Gen Z demographic of 61 million people, estimated to be worth $44 billion by 2020.

“[Gen Z and millennials] are content creators and natural-born storytellers,” Mohr said. “They create video content on a weekly basis, so why not make money by selling their own stuff.”

Mohr, who has a background in video production and is the mother of teenagers herself, said she was inspired, in part, by witnessing the vast amount of time her children spend on their phones. According to a study conducted by millennial marketing agency YPulse, which examined 1,000 Gen Z and millennial consumers, 38 percent of 13-35 year olds open a shopping app weekly on their phones, 30 percent actually make purchases on these apps each week and 16 percent shop daily.

Looking to the future, Mohr said she hopes to continue evolving the company to better tailor to the needs of Gen Z and millennial users. “The bigger we get and the more we grow, the more we can deliver very interesting insights into user behavior, and how that converts to sales,” she said.