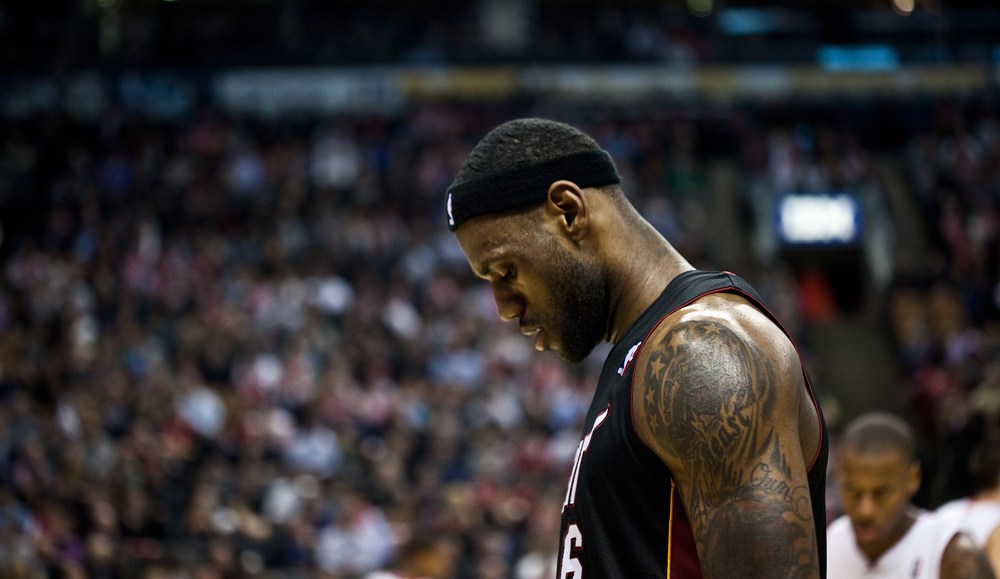 When Miami Heat forward Lebron James was forced to leave the court last night at the end of game one of the NBA Finals due to a leg cramp, it predictably elicited a chorus of jeers from diehard Lebron haters. Gatorade, meanwhile, saw it as a time to extoll the hydrating virtues of its product. One man’s misfortune is another’s real-time marketing opportunity, apparently.

James — a four-time NBA MVP — endorses Gatorade competitor Powerade. For Gatorade, Lebron’s cramping was proof positive that he chose to go with the inferior brand.

Lebron’s cramping was at least partially due to the air conditioning shutting off in the AT&T Center in San Antonio, Tex., where the game was played. The outside temperature was in the high 80s at the time.

@JohnAShumate They’re bringing the heat, but we’ll bring the Gatorade.

With a game this hot, we’re right at home. #WinFromWithin #NBAFinals

Lebron’s leg cramps started flaring up mid-way through the third quarter and persisted through the end of the game. Lebron’s leg cramped up so badly with four minutes left in the game that he had to be helped to the bench by his teammates. In a testament to the strength of Gatorade’s brand, Twitter users started blaming Lebron’s cramps on the sports drink not fulfilling its promise. Gatorade countered by consistently and slyly pointing out that James is a Powerade man.

@LazyBumDrew we were waiting on the sidelines, but he prefers to drink something else. — Gatorade (@Gatorade) June 6, 2014

Gatorade even forcibly defended itself against erroneous claims it had failed one of its own.

It even took shots at King James himself, mocking the Powerade endorser for not being able to stay in an important game.

@ryanbkoo The person cramping wasn’t our client. Our athletes can take the heat. — Gatorade (@Gatorade) June 6, 2014

Powerade dared not broach the cramping issue, however. It did tweet out some impressive stats about James, though.

Consistency, unselfishness and a drive to succeed. Congrats @KingJames on 4,000+ points and 1,000+ assists in the post-season. #powerthrough

Talk about awkward. Considering brands often use widely-watched live events as real-time marketing opportunities — even when they’re not remotely related to that brand’s product — it was refreshing for a brand to tweet with teeth about a topic on which it is an authority.

Update: As sports drink competitor BODYARMOR SuperDrink pointed out in the below tweet, James actually was drinking Gatorade during the game, thus making Gatorade’s Twitter taunts look foolish in retrospect — and its product ineffective.

Since Gatorade is the official sports drink brand of the NBA, it’s players’ only choice to drink on the sidelines.

Gatorade apologized for the string of tweets on Friday, saying “We got caught up in the heat of the battle.”