Ford Wants You To Wrap Your Car in Bacon 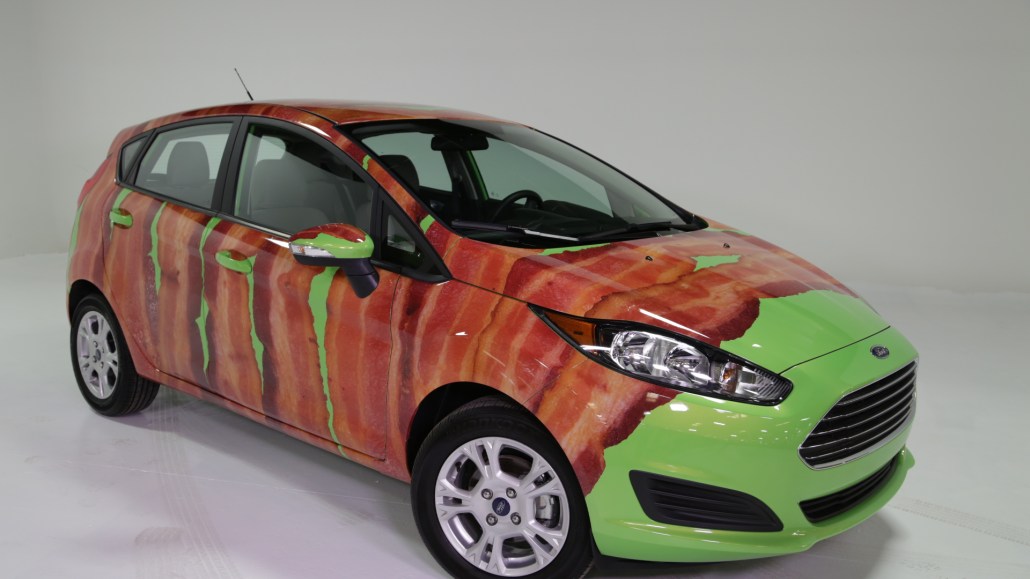 Bacon. Is there anything it can’t make better? Ford is coming dangerously close to finding out.

Just about any visit to the Internet yields the latest wacky bacon recipe or new bacon-flavored product, like bacon shaving cream and bacon flavored condoms. All this bacon hype reached its peak about a year ago – its aporktheosis, if you will – but that’s not stopping Ford from getting on the trend now.

This Saturday is apparently International Bacon Day. To mark the  occasion, Ford is offering to wrap your 2014 Fiesta in bacon – kind of. It’s not actual bacon, but a bacon shrink wrapped design. Ford customers, and more importantly bacon fanatics, can now choose from four different bacon designs to prokify their ride.

The full “Bacon Wrap” design features 10 strips of bacon that appear to be rolled around the car, like a giant automotive amuse-bouche. For drivers who want a sleeker bacon look there is the “Bacon Racing Strips”: two pieces of bacon on the car’s hood. For those who just want a taste, there is the “Side of Bacon” option, which is two strips of bacon that wrap over the rear wheels, or “Bacon Mini Strips,” which are even smaller bacon graphics. Prices for these custom bacon wraps range from $78-$318, plus installation costs.

Ford isn’t the first brand to try to get on the bacon bandwagon late. This past April, Scope played an April Fool’s joke and announced a new bacon-flavored mouthwash.

So, if, for some reason, you’ve ever dreamed of driving a bacon mobile, your dreams can now come true.