At the Digiday Retail Summit last month in Austin, Texas, we sat down with 53 retail executives to learn about their mobile strategies. Check out our earlier research on which platform media buyers find hardest to advertise on here. Learn more about our upcoming events here.

Mobile apps are essential to e-commerce, but less than half of retailers have them
Only 45 percent of retailers Digiday surveyed have a mobile app for consumers. However more e-Commerce sales take place on a mobile app than the mobile web or desktop. A report from Criteo found that mobile apps were the largest source of online purchases in 2017, with 44 percent of online purchases occurring on apps, 23 percent on mobile web and 33 percent on desktop computers. 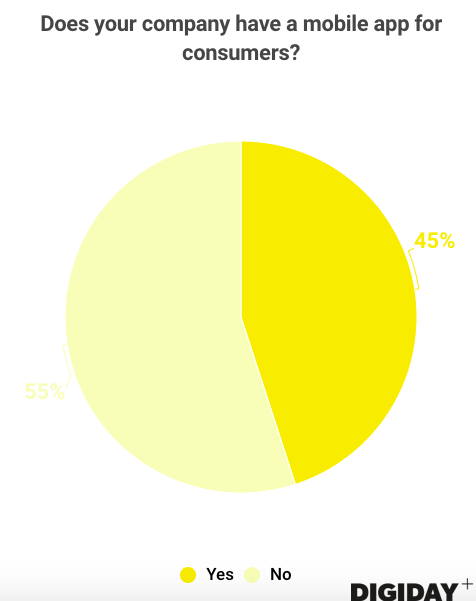 Given that eMarketer projects mobile commerce retail sales to reach $332.7 billion in 2021, up from 102.1 billion in 2017, retailers that don’t invest in an app could fail to capitalize on shifting consumer-buying behaviors. Amazon accounts for 43 percent of ecommerce spending in 2017, up from 38 percent in 2016. So while it is growing rapidly, there is room for competitors. Frequently cited reasons for why companies don’t have a mobile app were lack of time and money to create one.

Apps have multiple purposes
Of the respondents with an app, over 50 percent believe their company’s mobile app is significantly or extremely effective at contributing to sales, improving customer loyalty and collecting consumer data. 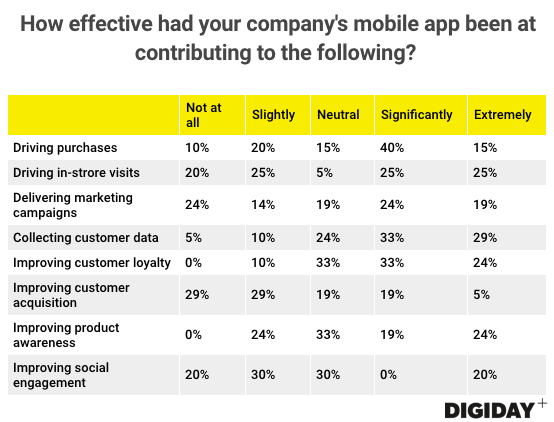 It’s not surprising that retailers find their apps effective at increasing product sales. Research from Astound Commerce noted that retailers’ apps are built to streamline the purchasing experience, requiring fewer steps on average than a retailers’ mobile websites. However, retailers shouldn’t assume that creating a mobile app will lead to increased revenue. Lowe’s, for instance, launched new mobile apps in the past year, but still saw a 1.8 percent decline in its fourth-quarter sales in 2017.

Retailers recognize their apps are more than just sales tools. “Essentially, [our app is] a loyalty program attached to a piece of technology that offers the customer convenience and ease of ordering,” said one retail executive at the Digiday Retail Summit in July. Target, for example, has used its mobile app, Cartwheel, to improve customer loyalty by rewarding returning customers with online price comparisons and coupons.

Sixty-two percent of retailers at Digiday’s February summit said their app is significantly or extremely effective at collecting consumer data, making it the function that apps are most effective at handling, according to respondents. If companies want to survive what has been dubbed the retail apocalypse, building a comprehensive digital strategy based on customer insights will play a crucial role. Toys ‘R’ Us failed to invest in digital initiatives until it was too late. A joint study by Deloitte Digital and Salesforce released this month found that retailers that invested more heavily in consumer data outperformed their competitors.

For retailers, properly analyzing consumer data is as important as collecting it. As an attendee at Digiday’s February summit put it: “Data can be so overwhelming, to the point you’re scrutinizing individual data points trying to get meaning out of it where there is no actual meaning. Then, you’re paralyzed.”