At the Digiday Hot Topic UK: Data-Driven Publishing event last November in London, we sat down with over 20 media-buying executives from major agencies across the country to discuss developing trends such as the General Data Protection Regulation and addressable TV’s potential. Check out our earlier research on advertisers’ lack of concern about brand safety here. Learn more about our upcoming events here.

The enforcement of the GDPR on May 25 has most in digital media on edge. The GDPR will upend how data is collected from consumers and then used to target them. Some advertisers have noted the GDPR’s potential to improve the quality of data collected, but many are apprehensive about what the GDPR means for their ability to accurately target consumers. Location-based ad tech vendors that supply the data necessary for audience targeting are particularly susceptible to the GDPR’s effects because of how they collect their data.

This has some advertisers turning to different media channels to reach consumers, including addressable TV. However, Digiday’s survey found that only 25 percent of respondents think addressable TV has the potential to replace digital advertising, should the GDPR harm advertisers’ ability to target consumers. 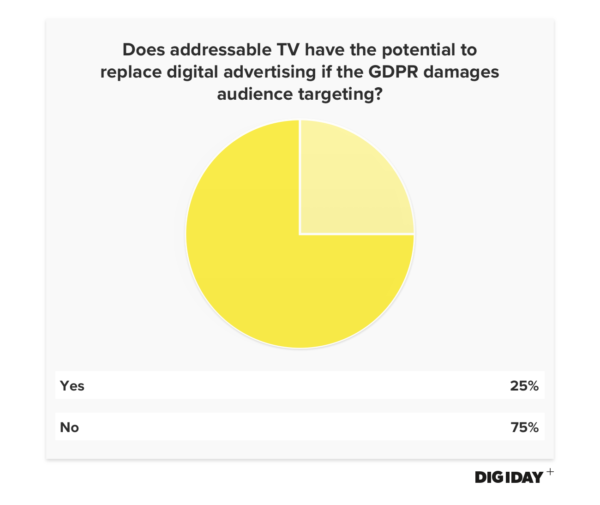 Although addressable TV ad spending is growing significantly, up 33 percent between 2016 and 2017, there are limitations. Both TV networks and OTT platforms fall far behind publishers in terms of the quality of data they collect. Two-thirds of respondents to Digiday’s survey believe publishers have the best data for targeting consumers, whereas just 16 percent said the same about TV networks. No respondents chose OTT platforms, which could be because over 80 percent of the 200 OTT streaming services offer ad-free subscription products. A lack of reliable TV audience measurement metrics has dissuaded advertisers from buying addressable TV, which must be improved before advertisers will spend their money on it. 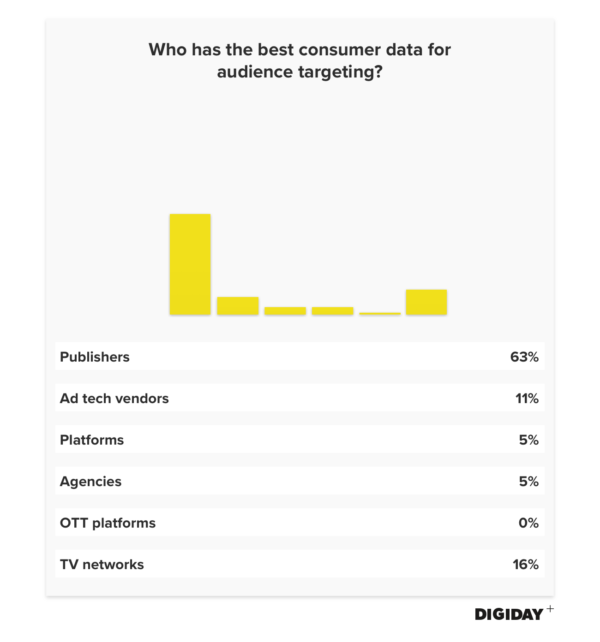